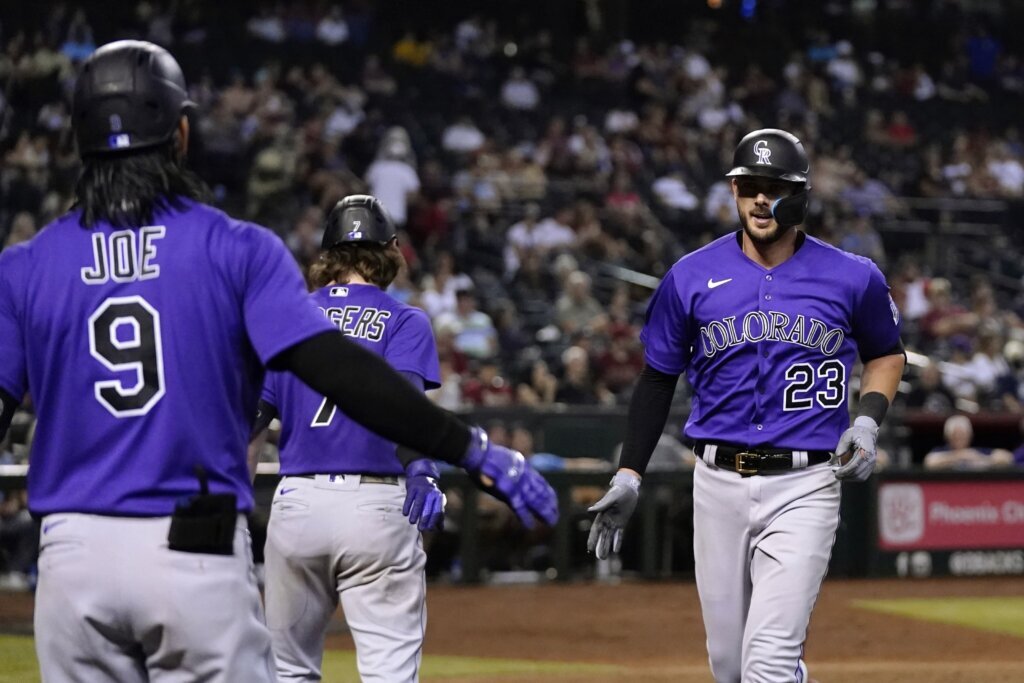 PHOENIX (AP) — Kris Bryant had his first multi-homer game of the season, leading the Colorado Rockies to a 6-5…

PHOENIX (AP) — Kris Bryant had his first multi-homer game of the season, leading the Colorado Rockies to a 6-5 victory over the Arizona Diamondbacks on Friday night.

Bryant hit solo homers in the first and seventh, his second and third homers of the year. It was his 17th game with two more more homers.

Chad Kuhl (6-5) threw five innings, allowing four runs on six hits, three walks and two homers. Alex Colome recorded his fourth save of the year despite allowing a run in the bottom of the ninth.

Josh Rojas answered Bryant’s first homer with his fifth of the season to tie it at 1 in the bottom of the first. Sergio Alcantara’s two-run shot in the second gave Arizona a 3-1 lead.

Kuhl had a bout of wildness in the bottom half of the fourth. Two walks and a wild pitch set up a perfect safety squeeze by Rojas, scoring Geraldo Perdomo from third base and upping Arizona’s lead to 4-2.

Diamondbacks starter Zac Gallen walked in a run in the fifth, his third walk of the inning, and then hit C.J. Cron on the hand with a pitch to drive in another, tying the game at 4. Cron had to be removed from the game with a right wrist contusion. X-rays were negative.

Kuhl threw a pitch in the fifth behind Daulton Varsho. After D-backs manager Torey Lovullo came out of the dugout to protest he was waived off by the umpires who huddled up and issued warnings to each bench. Bud Black then came out to argue strenuously to no avail.

The D-backs threatened in the ninth, scoring a run and getting the potential winning run to the plate, but Jordan Luplow lined out sharply to shortstop to end the game.

Rockies RHP Antonio Senzatela, who has been on the 15-day IL with shoulder inflammation since July 2nd, threw a bullpen session yesterday and will throw another tomorrow. If all goes well, he will pitch in a minor league rehab game next Tuesday. Black did not rule out the possibility of Senzatela returning by July 17 when he is eligible to be activated from the IL.