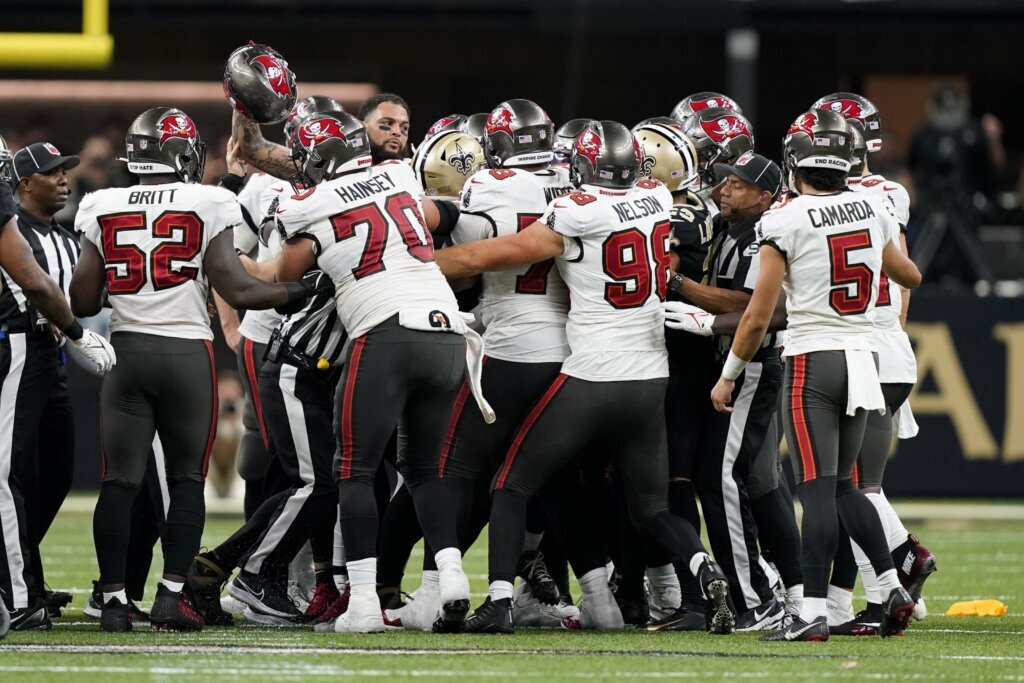 NEW ORLEANS (AP) — Buccaneers receiver Mike Evans and Saints cornerback Marshon Lattimore both were ejected for their involvement in a several-player, after-the-whistle scrap in the fourth quarter of Sunday’s meeting in the Superdome.

This marked the second time since 2017 that Evans has been thrown out of a game in the dome for flattening Lattimore after the Saints top defensive back had been squaring off with another Buccaneers player.

This time, it started after a third-down incomplete pass with Tom Brady shouting at Lattimore. As Lattimore responded, running back Leonard Fournette stepped in and shoved Lattimore, who shoved Fournette back.

That’s when Evans came running in from near the sideline and knocked Lattimore off his feet. Players poured off both sidelines at that point, and Saints wide receiver Jarvis Landry tried to grab Evans, only to have Evans slam him to the turf while both were engulfed by a swarm of players from both teams.

Officials conferred and elected to asses offsetting personal fouls on just Evans and Lattimore, and ejected both.

Lattimore and Evans have carried on a personal rivalry since 2017, when Lattimore was the defensive rookie of the year. During a Saints victory in New Orleans that season, an altercation began along the Tampa Bay sideline when then-Bucs quarterback Jameis Winston pointed in Lattimore’s face and told him to go back to his own bench area.

That’s when Evans blindsided Lattimore with a running start, knocking Lattimore hard to the turf. Only Evans was ejected that time. He also was suspended a subsequent game.