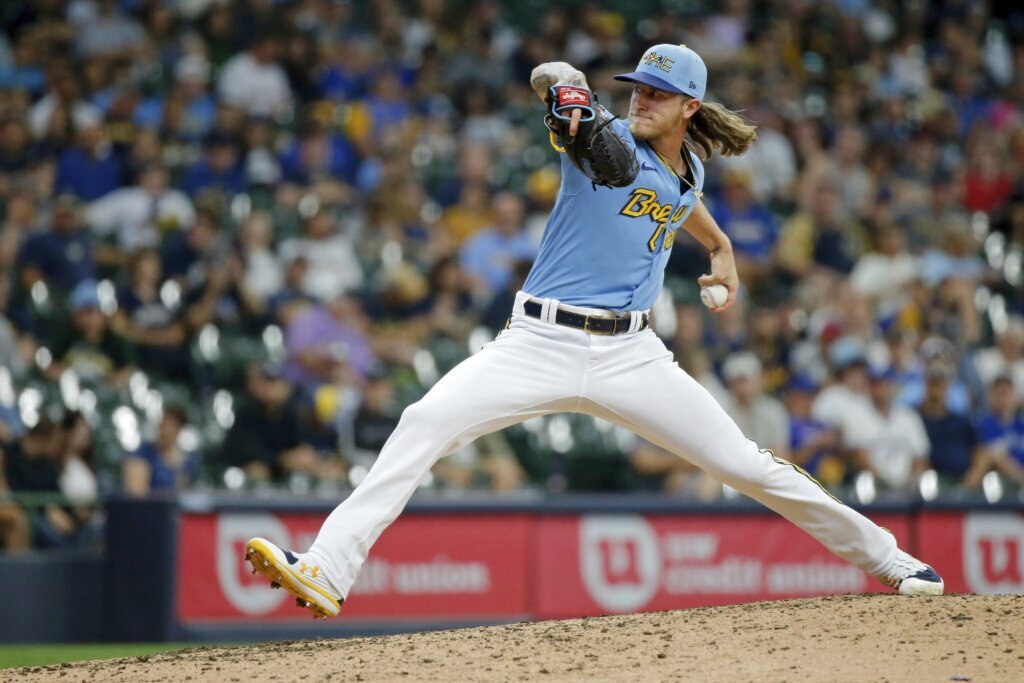 The reigning NL Cy Young Award winner extended his winning streak to a season-high three games, but he wasn’t as crisp as in a 2-0 win over the Cardinals on Monday.

In his first career start against Toronto, Burnes (6-4) allowed home runs to Matt Chapman and Bo Bichette and an RBI groundout by Cavan Biggio. He struck nine and walked two, then turned over a 5-3 lead with runners at first and second and two outs in the eighth to Devin Williams, who fanned Alejandro Kirk.

Chapman doubled with two outs and scored on a base hit by Lourdes Gurriel Jr. off Josh Hader, but the closer escaped with his 22nd save when Gabriel Moreno grounded out to first.

The Brewers gave him an early 5-0 lead.

McCutchen hit his sixth home run of the season, a two-run shot in the second. Willy Adames had an RBI single before McCutchen’s homer.

Tyrone Taylor’s hit drove in a run in the first for Milwaukee.

Kikuchi allowed five runs, two earned, on six hits with five strikeouts, a walk, a wild pitch and a hit batter. He slipped to 1-3 in his last seven starts.

Toronto’s bullpen shut down Milwaukee’s offense the rest of the game. Trent Thorton relieved Kikuchi and handled the third and fourth. Max Castillo pitched scoreless ball in the fifth, sixth, seventh and eighth.

Kirk was back in the lineup as Toronto’s DH. In Friday night’s 9-4 win, his hand got clipped by the backswing from Jonathan Davis in the seventh. Kirk stayed behind the plate for the rest of Davis’ at-bat, but he was replaced by Moreno when the Blue Jays went to the bullpen. Precautionary X-rays were negative.

Blue Jays: Gurriel got hit near his right elbow as he checked his swing in the third. After attention from the trainer, he stayed in the game. … OF George Springer was out of the lineup for a third consecutive game with an elbow issue. … INF Santiago Espinal got the day off. “We’re going to play 18 or 19 (in a row) so everybody’s going to get a day,” manager Charlie Montoyo said. Espinal pinch hit in the ninth.

Brewers: Brosseau got hit in the back in the first. … OF Hunter Renfroe missed a third straight game with a calf injury.

C Zack Collins was recalled from Triple-A Buffalo and activated for the game. INF Otto Lopez was optioned to Buffalo.

RHP José Berríos starts for the Blue Jays and RHP Chi Chi González (0-1, 7.36) goes for the Brewers when the three-game series concludes on Sunday.