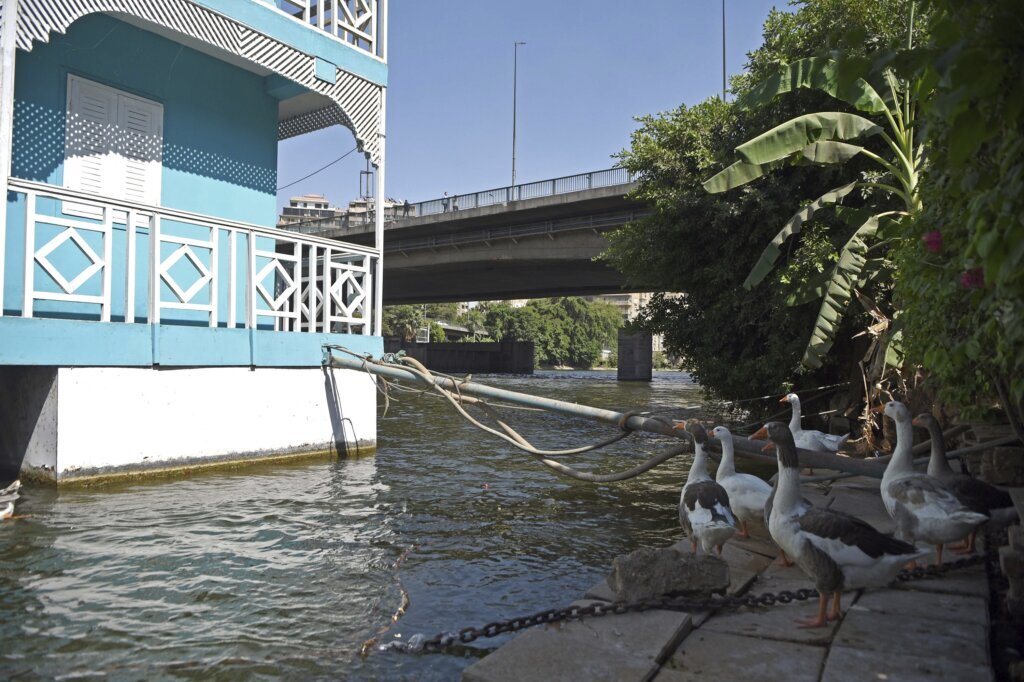 CAIRO (AP) — With verdant gardens on one side and water on the other, they were an anomaly in a…

CAIRO (AP) — With verdant gardens on one side and water on the other, they were an anomaly in a city bordered on three sides by desert. For decades, Cairo’s houseboats occupied prime waterfront real estate, offering residents a front-row seat to the passing Nile River, with its water taxis, anglers, sport rowers and occasional family of ducks.

But it’s coming to an end: A government push to remove the string of floating homes from the city’s Nile River banks has dwindled their numbers from several dozen to just a handful. Houseboats have been a Cairo tradition dating back to the 1800s and government efforts to remove them have drawn criticism in Egypt, where residents are mourning the loss of not just their homes but a way of life. Critics say the move is part of a series of development decisions by the government of Abdel Fattah el-Sissi that endanger the city’s heritage.

“The point is that they really, really don’t seem to understand that there is value — intangible values — there is value in history,” said Ahdaf Soueif, a prize-winning Egyptian novelist who bought and renovated a her houseboat after moving back to Egypt from the United Kingdom 10 years ago,

The floating homes are being removed or renovated to develop the waterfront commercially, according to officials. They have not released detailed plans of what that entails. In recent years a surge in infrastructure projects by el-Sissi’s government has drawn concern about heritage sites, including an ancient cemetery and historic gardens.

In late June, residents of at least 30 houseboats were ordered to evacuate within 20 days. Located on a stretch of the river in the working-class neighborhoods of Imbaba and Kit-Kat, they sat opposite the upscale residential island of Zamalek. The eviction notices came after years of government pressure in the form of increasingly expensive mooring licenses.

Action followed soon after, with most of the dwellings being dismantled by their owners or moved by the government in late June. The evictions are ongoing.

Soueif said her two sons had their wedding parties at her houseboat and it’s where she planned to spend the rest of her life. This week, her family watched it float away.

Omar Robert Hamilton, Soueif’s son, said in a post on social media that Soueif and other residents stopped paying the fees and sued to fight the increases. But the government imposed fines and they are now demanding Soueif’s family produce 900,000 pounds, or roughly $48,000, in back fees.

Soueif hails from a prominent family of anti-government activists in Egypt and her nephew Alaa Abdel-Fattah, perhaps the country’s most high-profile activist, was imprisoned under el-Sissi. She said the opaqueness of the government’s decision-making is startling. She learned from an official’s recent interview on television that the Engineering Authority of the Armed Forces made the decision to evict the houseboat residents in 2020.

The authority is the force behind the military’s many road projects and the country’s mega-plans, including construction of a new administrative capital on Cairo’s desert outskirts. New building and development is not easy in Cairo, a city with layers upon layers of history. But Soueif says sacrificing history is not the right way to go about it.

“When you’re trying to turn Egypt into Dubai, you actually devalue it,” Soueif said, referring to the newness of one of the Middle East’s most modern capitals. “You are just destroying your assets that nobody has.”

Iklas Helmy, an 88-year-old owner of a bright blue houseboat, said she cannot imagine life elsewhere. She was born on a houseboat. She’s tried to get a new license for her houseboat — her home of the past 25 years — and was told it couldn’t be renewed and that the decision comes from very high up.

“You’re going to take my entire life away to build a cafe?” she said. Talking about it reduces her to tears.

Walking with a cane, Helmy greeted two geese who live on the riverbank next to her home.

After being featured in a number of media reports, Helmy’s case has caused some outcry. She called on the government to let her live in the boat until she dies. Her plea made it all the way to the president. In a rare televised question from the media, a reporter from the pan-Arab satellite channel Al-Hadath asked him about Helmy’s situation specifically.

El-Sissi said he appreciated Helmy’s situation but said: “We are bringing order back to the country.” He did not elaborate.

It remains unclear what will happen to some of the boats that were towed —where they will be moored or if their owners can afford the fees.

Tariq al-Murri, an Egyptian architect who specializes in issues of heritage, said the wooden houseboats are most reminiscent of those that floated on the Seine in Paris in the mid 1800s, and where some still exist. At the time, Egypt’s ruler Ismail Pasha strived to imitate everything architecturally that he had seen in France.

Al-Murri said houseboats on the Nile captured Egyptians’ imaginations and were featured in several of the country’s classic films and books. Some became locations for cabarets and bars. But now, the ones in question are largely just homes.

Al-Murri said government officials should have considered other options before forcing demolitions. He said the boats could be preserved, moved to another stretch of waterfront and turned into one of the city’s attractions.

“I think a conversation could still happen,” he said.

But there are indications that there is no room for discussion on the issue.

The television interview last month in which Soueif and other residents learned of the floating homes’ fate was given by Ayman Anwar, a government official who heads the Central Administration for the Protection of the Nile. He said boats that work in the tourism industry will be allowed to stay, but not those that are residences.

“The houseboats are like dilapidated cars from 1978 the licenses of which have been canceled by the traffic authorities,” he said.