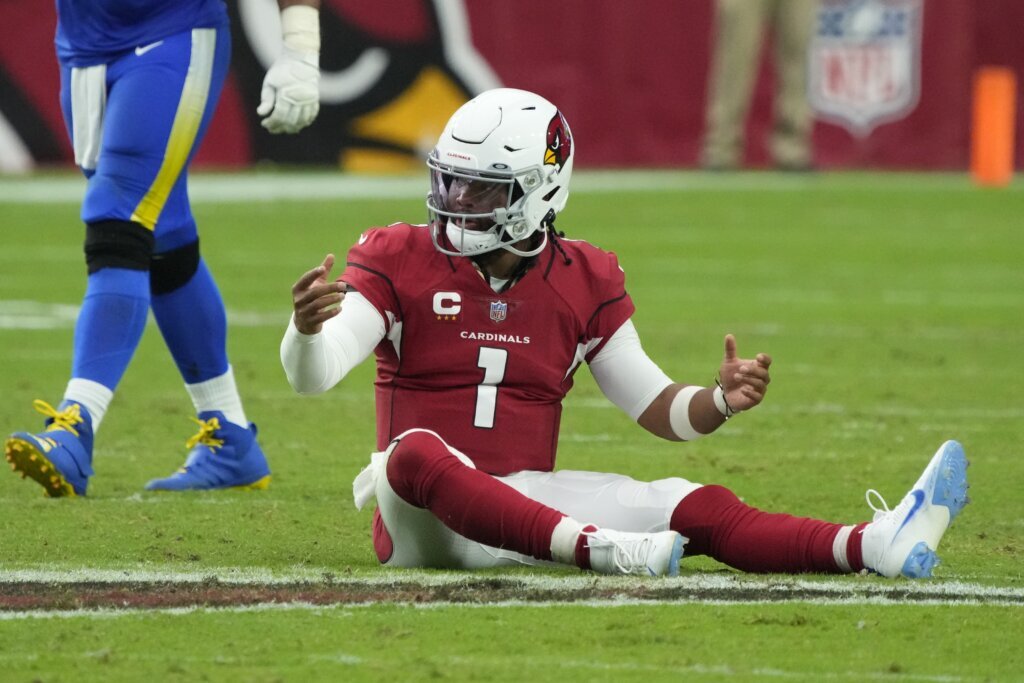 GLENDALE, Ariz. (AP) — The Arizona Cardinals had a game plan they hoped would end their extended misery against the…

GLENDALE, Ariz. (AP) — The Arizona Cardinals had a game plan they hoped would end their extended misery against the Los Angeles Rams.

Another sputtering start and an inefficient offense caused them to rip it up before the first quarter had even ended.

The Cardinals fell into an early hole for the third straight game and failed to score a touchdown in a 20-12 loss on Sunday, their seventh straight at home to the reigning Super Bowl champions.

“We didn’t execute great, we didn’t call a great game and if you get behind, you play one-dimensional and play catch-up the whole way,” Arizona coach Kliff Kingsbury said.

Arizona fell into a quick 14-point hole and never recovered in a season-opening 44-21 loss to Kansas City. The Cardinals managed to bounce back from a shaky start last week at Las Vegas, overcoming a 20-point halftime deficit to beat the Raiders 29-23 in overtime.

Another week, another hole, no comeback this time.

Arizona (1-2) went three-and-out in its first series, then had a punt blocked, setting the Rams (2-1) up for a field goal. Another three-and-out and more good field position for Los Angeles led to Cooper Kupp’s 20-yard TD reception from Matthew Stafford.

A second field goal by Matt Gay made it 13-0 early in the second quarter, forcing the Cardinals to abandon big chunks of their game plan.

Kyler Murray did his best to keep the Cardinals in it with his arm, throwing for 314 yards on 37-of-58 passing. Unlike the previous two games, he did little with his legs, finishing with 8 yards on two carries. He also was sacked twice.

“They rush me differently than other guys, so if that breaks down during the course of the game it is easier for me to do stuff like that (against other teams),” Murray said.

Marquise Brown had his best game since being traded from Baltimore last offseason, catching 14 passes for 140 yards.

DeAndre Hopkins missed his third game while serving a six-game suspension for violating the NFL’s policy on performance-enhancing drugs. Rondale Moore and Antoine Wesley are both still out with injuries, and A.J. Green departed with a left knee injury in the second quarter, forcing several backups into action.

“The guys stepped up and did a good job,” Kingsbury said. “We’ve just got to figure out how to win a game with that offense.”

Arizona had its chances.

After a lackluster first quarter, the Cardinals started to find an offensive rhythm in the second. Arizona converted two fourth downs in its own end during a 19-play drive, but stalled and had to settle for a field goal by Matt Prater. The Cardinals had a 16-play drive in the third quarter and again sputtered in the red zone, leading to another field goal.

Trailing 20-9 in the fourth quarter, Arizona again moved the ball into Rams territory.

Instead of trying a field goal from the Los Angeles 26-yard line, Kingsbury opted to go for it on fourth-and-4. Facing pressure, Murray had to hurry his throw and Rams defensive back Derion Kendrick swatted it down, all but ending Arizona’s hopes.

“It gets tighter down there, so you’ve got to be more precise,” Brown said. “We can’t keep hurting ourselves down there.”

Same goes for the start of the game.