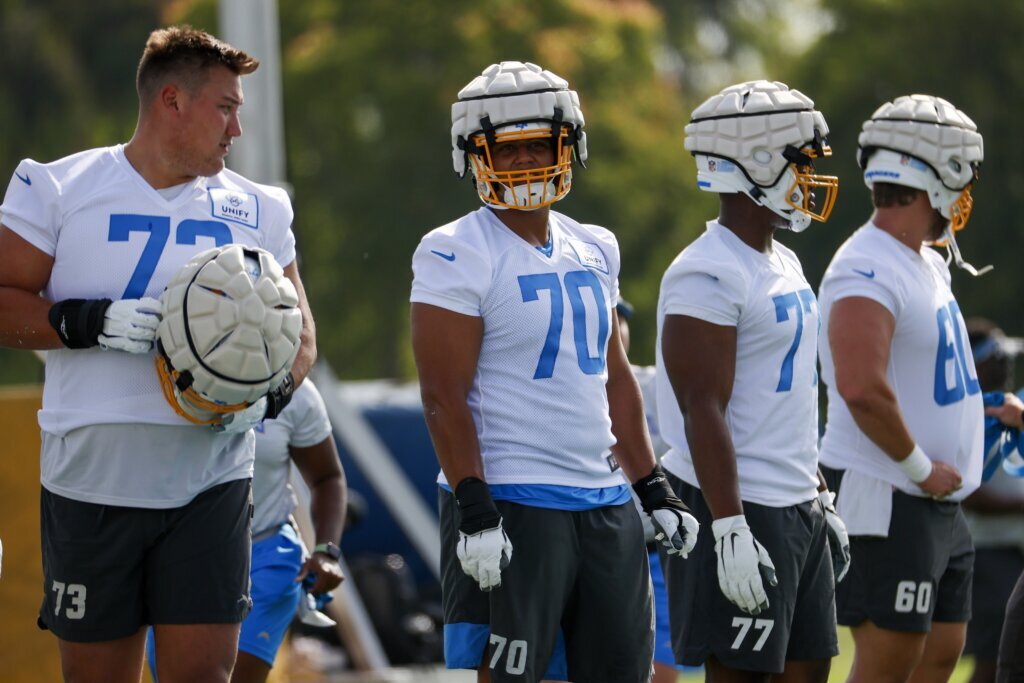 That mentality has been evident during training camp. Johnson’s continual progress has bolstered the first-round draft pick’s bid to become the Chargers’ starting right guard.

“I’m going to pick one thing and I’m gonna get better at that every day,” Johnson said. “If I want to work on my hands, my footwork, doing a certain thing in any given play, I pick that thing. I work on it each day. And it helps me kind of focus on how I’m tracking how much better I’m doing.”

After struggling to run the ball consistently last season, the Chargers attempted to upgrade the interior of their offensive line by selecting Johnson with the 17th overall pick in the draft. The Chargers averaged 107.9 yards rushing per game last season on 4.34 yards per carry.

The initial returns have been promising. Johnson, a four-year college starter who excelled at Boston College after transferring from Davidson, has meshed well with veteran center Corey Linsley and left guard Matt Feiler.

“You just feel the line of scrimmage moving in the run game, and you feel a real sturdy pocket inside in the pass game” offensive coordinator Joe Lombardi said. “I’ve been really pleased with those guys.”

Johnson has struggled at times to pick up stunts and blitzes. Lombardi said that is to be expected from a rookie, no matter how strong or fast he might be.

“He wants to do things exactly what you’re asking him to do, almost to a fault at times,” Nugent said. “But you know, he’s strong, athletic. A lot of times that can get him out of some jams. But he’s working to refine his technique and everything else, so that it just becomes a little easier for him.”

It didn’t take long for Johnson to realize a different level of focus is necessary to succeed at this level.

“You know, in college, sometimes you can get away with things. In the NFL, you have to be detailed and specific about everything at all times,” he said. “That’s something that is a different adjustment, but I feel like I’ve been kind of taking initiative in that adjustment and doing well with it.”

To help bridge the gap, Johnson has been leaning on Linsley and Feiler to answer whatever football questions he might have about scheme or approach.

When it comes to handling the mental part of the game, Johnson turns to second-year left tackle Rashawn Slater.

“He’s really talked to me a lot about game day, you know, the feelings, the emotions, they hype behind it, Johnson said. “He’s another person who I kind of talk to, he helps me with little tips and things to stay calm, to focus on my job. He’s just a great resource.”

Even though there are outside expectations to follow up Slater’s brilliant rookie season with one of his own, Johnson isn’t worried.

“I don’t feel the pressure,” he said. “There may be some, but at the end of the day, I’m just playing the game with my teammates.”

NOTES: S Derwin James continues to ‘hold in’ as he seeks a contract extension. He again limited his involvement in practice to stretching and conditioning drills on Saturday. James is in the fifth and final season of his rookie contract after being drafted 17th overall in 2018. He hasn’t participated in individual or team periods so far during training camp. … TE Donald Parham Jr. left practice early after sustaining a left leg injury.