CHELSEA’S hectic summer of transfers lasted right up until the last moments of the window.

Pierre-Emerick Aubameyang and Denis Zakaria were both announced last night, and the Blues are also claimed to have failed in a late approach for PSV Eindhoven star Ibrahim Sangare.

Chelsea contacted the Dutch club this week about potentially signing the midfielder, according to to Eindhovens Dagblad.

The Blues were claimed to have been willing to pay £39million to sign the 24-year-old.

But PSV rejected the approach as the Dutch transfer window closed the day before the UK deadline and they could not replace the Ivory Coast international.

Had Chelsea expressed their desire to sign Sangare earlier, the Blues could have got themselves a cheaper deal. 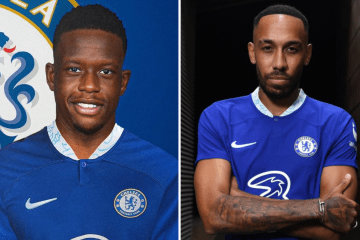 Sangare had a reported £32m release clause, but signed a new five-year contract in August that removed the clause.

The midfielder has also been the subject of reported interest from Manchester United and Leicester in recent months.

In the end Chelsea signed Zakaria from Juventus on a one-year loan deal to provide cover in the middle of the park.

The Blues have the option to sign the 25-year-old for £30million next summer.

WIN A PS5 IN SEPTEMBER WITH DREAM TEAM

But despite Todd Boehly splashing the cash in his first window as owner, signing a midfielder proved difficult.

As well as Sangare, Chelsea also failed to sign Edson Alvarez from Ajax in a £43m move.

The Dutch champions blocked his exit – despite Alvarez going on strike to try and force through a transfer.

A £12.6m deal with Dynamo Moscow had been agreed but fell through due to the sanctions the UK has placed on Russia amid the war in Ukraine.

Weekend Road & Rail: Best times for Labor Day travel and a look ahead on I-66 and Metro