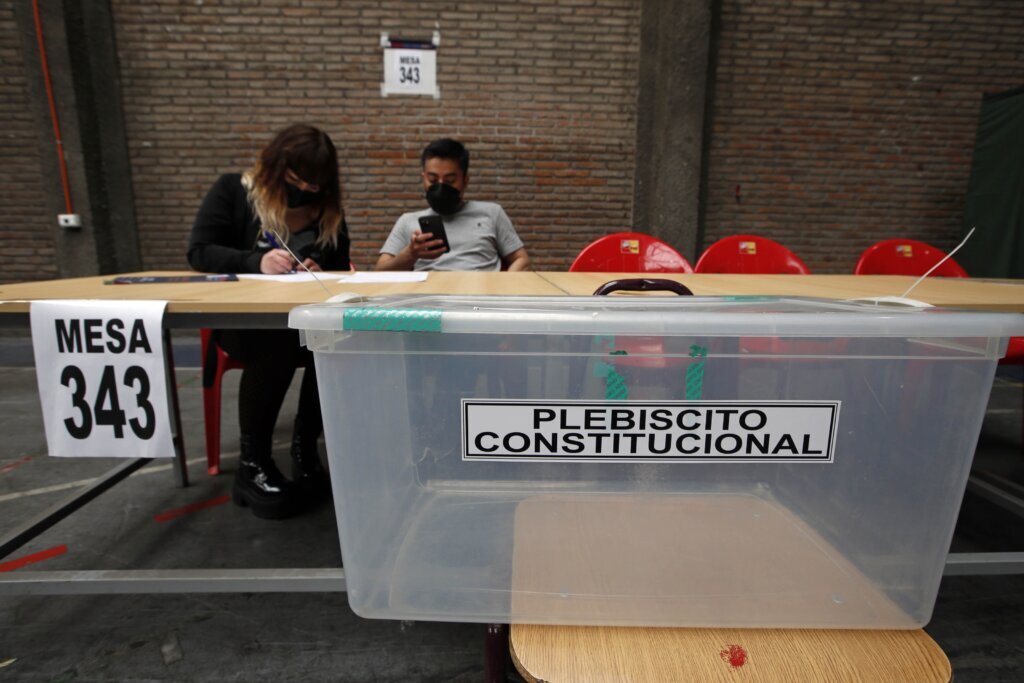 SANTIAGO, Chile (AP) — Chileans voted in a plebiscite Sunday on whether to adopt a far-reaching new constitution that would…

SANTIAGO, Chile (AP) — Chileans voted in a plebiscite Sunday on whether to adopt a far-reaching new constitution that would fundamentally change the South American country.

The proposed charter is intended to replace a constitution imposed by the military dictatorship of Gen. Augusto Pinochet 41 years ago.

For months, opinion polls have shown a clear advantage for the rejection camp, but the difference has been narrowing, giving hope to the charter’s supporters that they can pull out a victory.

“We are clearly in a situation in which the result will be close,” said Marta Lagos, head of MORI, a local pollster. “The Chilean is a political animal who decides at the last minute.”

Polls had closed around the country amid what appeared to be high turnout as Chileans often had to endure long lines at voting stations. Results were expected to start coming in one or two hours after polls closed.

Some said they feared the effects of the new document, including Olga Bahamontes, 61, who said “there are things that can be improved” in it. She cast her ballot against the proposed constitution.

“They could take more of my money than they already do. How are we going to cover everything? Nothing is free,” Bahamontes said of the new rights to health care enshrined in the proposed constitution.

The outcome will have a resounding impact on President Gabriel Boric, 36, who has been one of the main proponents of the new constitution. Analysts say voters also likely view the vote as a referendum on Chile’s youngest-ever president, whose popularity has plunged since taking office in March.

Italo Hernández, 50, said he had backed the changes as he exited the polling station in the National Stadium in Chile’s capital of Santiago on an unusually hot and sunny winter day. “We have to leave behind Pinochet’s constitution that only favored people with money.”

Hernández said it was “very symbolic and very emotional” to be voting at a stadium that had been used as a detention and torture site during the military dictatorship.

Others, however, remain deeply skeptical of the proposed charter.

“There are other ways and other paths to achieve what people are asking for or what we need as a nation that isn’t simply to change the constitution,” Mabel Castillo, 42, said. “We all need to evolve. I know it’s an ancient constitution that needs changes, but not in the way that is being done today.”

Voting is mandatory in the plebiscite, which climaxes a three-year process that began when the country once seen as a paragon of stability in the region exploded in student-led street protests in 2019. The unrest was sparked by a hike in public transportation prices, but it quickly expanded into broader demands for greater equality and more social protections.

The following year, just under 80% of Chileans voted in favor of changing the country’s constitution that dates from the country’s 1973-1990 military dictatorship led by Augusto Pinochet.

“It’s clearly necessary to make a change in the country, to adopt a new navigation chart in which social rights appear clearly in a new constitution,” Cristian González, 44, said. “We must change the neoliberal model that is part of a political history that we must start healing.” Even as he voted with enthusiasm, González acknowledged he was “worried” about the prospects for the new document.

In 2021, Chileans elected delegates to a constitutional convention. Amid the anti-establishment fervor of the time, Chileans largely chose people outside the traditional political establishment to draft the new constitution. It was the first in the world to be written by a convention split equally between male and female delegates.

The makeup of the convention is precisely why some people are excited to vote for the new document.

“This is the first time we all write a constitution, because before it was only up to small, powerful groups,” Fernando Flores, 71, said after casting his ballot. “We can’t keep living this way.”

After months of work, delegates came up with a 178-page document with 388 articles that, among other things, puts a focus on social issues and gender parity, enshrines rights for the country’s Indigenous population and puts the environment and climate change center stage in a country that is the world’s top copper producer. It also introduces rights to free education, health care and housing.

The new constitution would characterize Chile as a plurinational state, establish autonomous Indigenous territories and recognize a parallel justice system in those areas, although lawmakers would decide how far-reaching that would be.

In contrast, the current constitution is a market-friendly document that favors the private sector over the state in aspects like education, pensions and health care. It also makes no reference to the country’s Indigenous population, which makes up almost 13% of the country’s 19 million people.

“This is a door to build a more just, more democratic society,” said Elisa Loncon, an Indigenous leader who was the first president of the convention. “It isn’t as if Chile will wake up with all its political and economic problems automatically resolved, but it’s a starting point.”

Hundreds of thousands of people took over a main avenue in Chile’s capital Thursday night at the closing rally of the pro-charter campaign, a turnout that proponents say shows a level of excitement the polls do not reflect.

“Polls have not been able to capture the new voter, and above all, the young voter,” Loncon said.

Once the convention got to work, Chileans quickly began souring on the proposed document, with some worrying it was too far left.

“The constitution that was written now leans too far to one side and does not have the vision of all Chileans,” 41-year-old Roberto Briones said after voting. “We all want a new constitution, but it needs to have a better structure.” Briones was particularly opposed to the “different systems of justice,” saying, “We’re all Chileans, regardless of whether we have different origins.”

Supporters say opposition to the new document has been due at least in part to a flood of falsehoods spread about its contents.

But Chileans also grew frustrated at the convention delegates, who often made headlines for the wrong reasons: One lied about having leukemia and another cast a vote while taking a shower.

“An opportunity was missed to build a new social pact in Chile,” said Sen. Javier Macaya, head of the conservative Independent Democratic Union party that is campaigning against the new constitution. “We are defending the option to reject (the document) so we have a new chance to do things better.”

Macaya insists it is important for a new constitution to win approval by a broad margin “through consensus and compromise.”

Although Chileans, including the country’s political leadership, largely agree the dictatorship-era constitution needs to be tossed out, how that will be achieved if the current proposal is rejected remains to be seen.

“If it’s rejected, what is institutionalized is maintaining Pinochet’s constitution — that constitution that no longer answers the needs of Chilean society,” Loncon said.