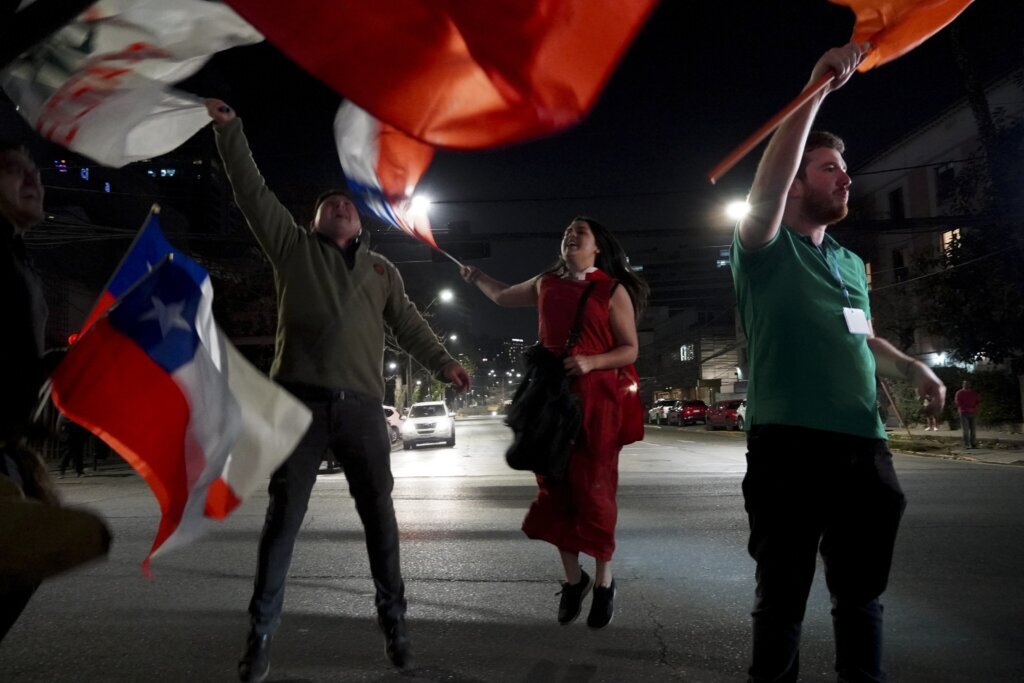 SANTIAGO, Chile (AP) — After voters in Chile rejected a progressive constitution that would have fundamentally changed the country, political…

SANTIAGO, Chile (AP) — After voters in Chile rejected a progressive constitution that would have fundamentally changed the country, political leaders on Monday started working on finding a path forward to reform the current charter which dates back to the dictatorship of Gen. Augusto Pinochet.

Rejection had been widely expected in Sunday’s plebiscite, but the 24-point margin of victory for the rejection camp was a shocking repudiation of a document that was three years in the making and crafted by a constitutional convention.

The proposed document, which would have amounted to one of the world’s most progressive constitutions, won a majority in only eight of the country’s 346 communes.

The streets of Santiago were calm Monday and there were barely any protests, proving wrong predictions that those in the approval camp would turn violent if they lost the plebiscite.

At government house, President Gabriel Boric met with the heads of the two chambers of congress to try to work out a path forward to amend the document that dates back to the country’s 1973-1990 military dictatorship.

For months, analysts had said that voters were likely to see the plebiscite on the proposed constitution as a referendum on Boric, 36, who had been a big proponent of the document.

In the final vote, the 38% who voted in favor of the new charter lined up pretty much identically with the approval rating for Boric, Chile’s youngest president.

“It’s the first time I’ve seen anything like this,” Lagos said. “This result transformed the government’s approval into votes.”

After the sit-down with Boric Monday morning, Sen. Álvaro Elizalde, the head of the Senate, said that he and his counterpart in the lower house, Raúl Soto, will call for meetings with Chile’s political parties and social movements to start a dialogue that will launch a new constitutional process.

The meetings will seek “to move forward toward a new constitution that will unite all Chileans,” Elizalde said. “We hope to move quickly in this process, listening to the different views and proposals.”

The country’s conservative leaders, who were barely represented in the constitutional convention, now have the upper hand in possible negotiations.

“Those 24 points of difference gives the right a very clear margin for negotiation,” said Cecilia Osorio, a professor at Chile University’s Government School. “They now have a margin to establish the rhythm of what follows and also the content of those proposals.”

What the process to write the new proposed charter will look like remains to be seen but analysts say some general outlines are clear for a new constitutional convention that will likely be smaller with political parties playing a larger role. The previous convention was made up by a majority of political independents.

“The responsibility will fall mostly in the political elites that had been left out of the process and now once again will play a leading role,” Osorio said.

Whatever document the new convention comes up with is also likely to be far less ambitious than the 388-article proposed charter that characterized Chile as a plurinational state, would have established autonomous Indigenous territories, prioritized the environment and gender parity and introduced rights to free education, health care and housing, among other issues.

“What we can aspire to now is a proposal that is much more moderate than the initial proposal that was rejected, a proposal with many more elements of continuity,” said Claudia Heiss, a political scientist at the University of Chile. “Then the question will be to what degree this level of continuity with the current system is compatible to channel the discontent that was expressed in the social upheaval” of 2019.

The proposed constitution marked the climax of a three-year process that began in 2019, when the country exploded in student-led street protests sparked by a hike in public transportation prices that quickly morphed into broader demands for greater equality and more social protections.

The following year, just under 80% of Chileans voted in favor of changing the constitution. Then in 2021, they elected delegates to a constitutional convention.

In retrospect, it’s possible “the explosion of 2019 was overinterpreted,” said Eugenio Tironi, a Chilean sociologist. “It was a phenomenon of urban youth, and not the poorest. They were frustrated by expectations that were not met, rather than hunger, and that phenomenon was given a much more global connotation, believing that the whole population was behind that. I think that was a mistake.”

In contrast, political leaders paid little attention to what Tironi characterizes as “the hangover” from that social revolt that amounted to a “reactivation of society’s conservative genes.”

Still, Tironi is optimistic the process can move forward with enough speed to ensure there is a new vote on a constitution by September of next year, which will mark the 50-year anniversary of the 1973 military coup.