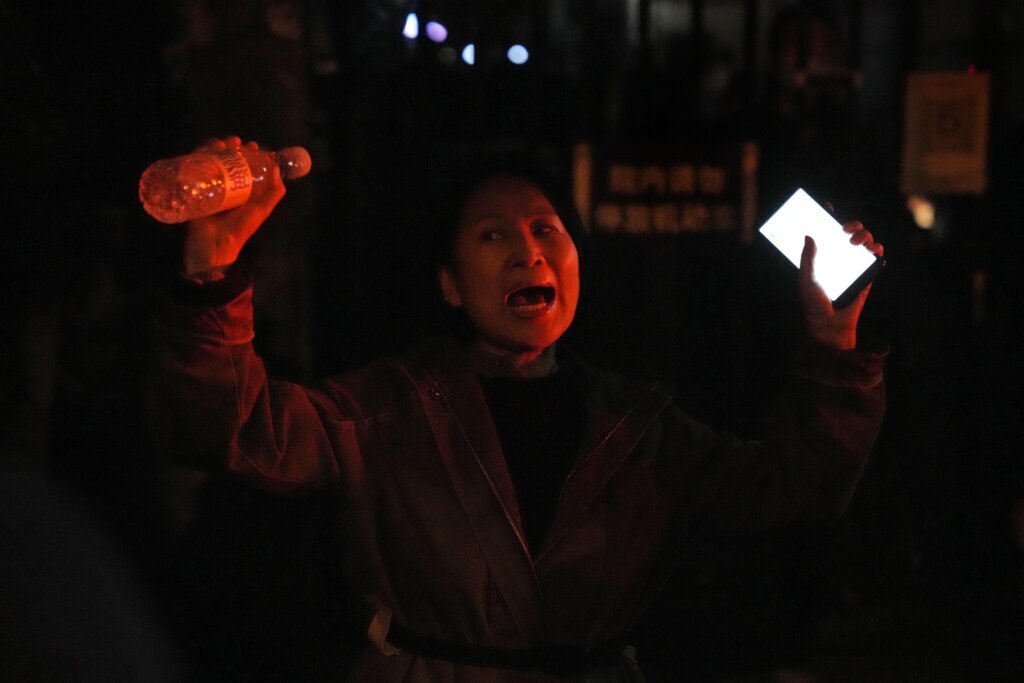 The government made no comment on the protests or criticism of Xi, the most widespread display of opposition to the ruling Communist Party in decades. There was no official word on how many people were detained after police used pepper spray against protesters in Shanghai and struggled to suppress demonstrations in other cities including Beijing, the capital.

The city government of Beijing announced it would no longer set up gates to block access to apartment compounds where infections are found. It made no mention of a deadly fire last week that set off the protests following angry questions online about whether firefighters or victims trying to escape were blocked by locked doors or other anti-virus controls.

“Passages must remain clear for medical transportation, emergency escapes and rescues,” said a city official in charge of epidemic control, Wang Daguang, according to the official China News Service.

“Zero COVID,” which aims to isolate every infected person, has helped to keep China’s case numbers lower than those of the United States and other major countries. But people in some areas have been confined at home for up to four months and say they lack reliable food supplies.

The ruling party promised last month to reduce the disruption of “zero COVID” by changing quarantine and other rules. But public acceptance is wearing thin after a spike in infections prompted cities to tighten controls, fueling complaints overzealous enforcement is hurting the public.

The ruling party newspaper People’s Daily called for its anti-virus strategy to be carried out effectively, indicating Xi’s government has no plans to change course.

“Facts have fully proved that each version of the prevention and control plan has withstood the test of practice,” a People’s Daily commentator wrote.

Also Monday, the southern manufacturing and trade metropolis of Guangzhou, the biggest hotspot in China’s latest wave of infections, announced some residents will no longer be required to undergo mass testing. It cited a need to conserve resources.

Protests spread to at least eight major cities after at least 10 people died Thursday in the fire in an apartment building in Urumqi in the northwestern region of Xinjiang.

Most protesters complained about excessive restrictions, but some shouted slogans against Xi, China’s most powerful leader since at least the 1980s. In a video that was verified by The Associated Press, a crowd in Shanghai on Saturday chanted, “Xi Jinping! Step down! CCP! Step down!”

Police using pepper spray broke up that demonstration, but people returned to the same spot on Sunday for another protest. A reporter saw an unknown number being driven away in a police bus after being detained.

Elsewhere, videos on social media that said they were filmed in Nanjing in the east, Chongqing and Chengdu in the southwest and other cities showed protesters tussling with police in white protective suits or dismantling barricades used to seal off neighborhoods. The Associated Press could not verify that all those protests took place or where.

Urumqi and a smaller city in Xinjiang, Korla, announced markets and other businesses in areas deemed at low risk of infection would reopen this week and public bus service would resume in what appeared to be an attempt to mollify the public.

There was no indication whether residents in higher-risk areas would be allowed out of their homes.