Chinese developer stocks and bonds rallied after Bloomberg reported that the nation’s financial regulators told the biggest state-owned banks to provide financing worth at least $85 billion to the battered property sector.

A Bloomberg Intelligence gauge of real estate stocks jumped as much as 2.6% on Monday. CIFI Holdings Group Co., KWG Group Holdings Ltd. and Agile Group Holdings Ltd. were the top gainers in Hong Kong, up more than 10% each. Meanwhile, higher-rated developer dollar bonds rebounded, with some notes snapping a two-week losing streak.

The People’s Bank of China and the China Banking and Insurance Regulatory Commission recently told the six largest banks to each offer at least 100 billion yuan ($14 billion) of financing support including mortgages, loans to developers and purchases of their bonds, people familiar with the matter told Bloomberg News.

Mainland markets are closed this week for a holiday. The move would be the latest in a series of actions intended to arrest a property slump that’s been weighing on the world’s second-largest economy for more than a year. Chinese policymakers have already encouraged local governments to ease curbs on homebuying and asked lenders to meet reasonable financing needs of developers.

“We believe this adds weight to the long list of ongoing easing measures for the property sector, and suggests the worst time of property tightening is likely behind us,” Citigroup analysts including Judy Zhang wrote in a note. 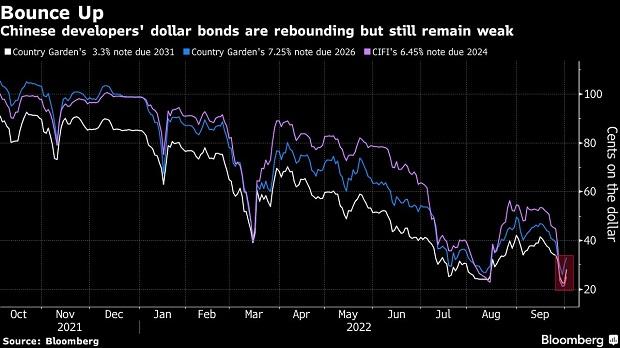 Among other measures, China also unveiled a rare tax incentive for homebuyers on Friday, while the nation’s central bank lowered interest rates on housing provident fund loans for first-home buyers.

Still, some investors remained wary as to the effectiveness of the latest news. Calls for industry support have gathered pace in recent weeks ahead of the twice-a-decade Communist Party congress later this month.

Here is what other analysts are saying: