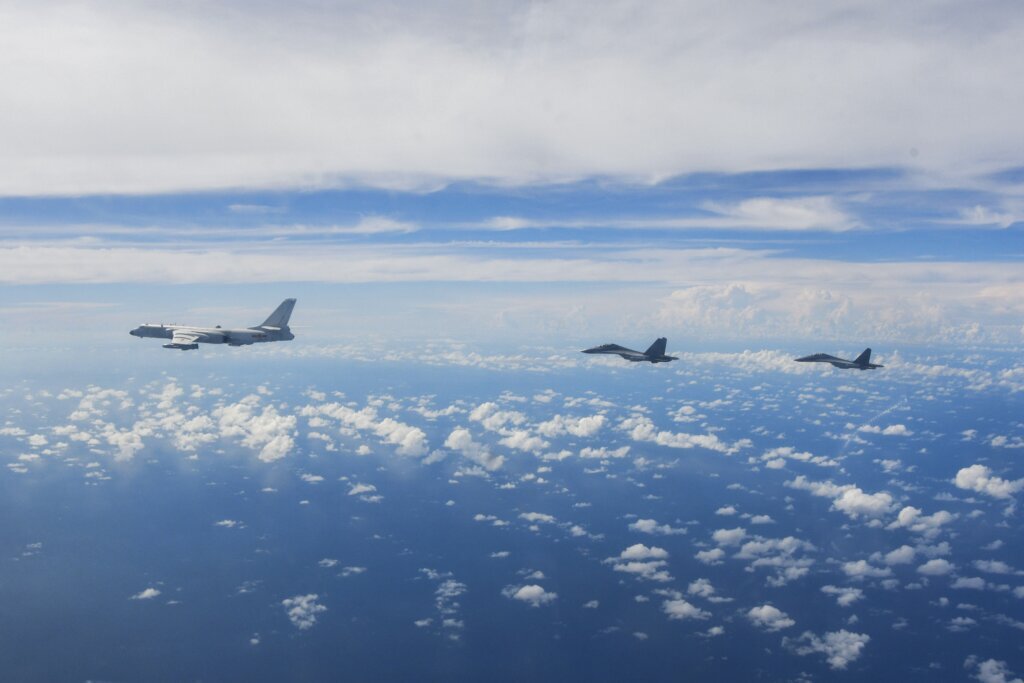 BEIJING (AP) — China on Thursday renewed its threat to attack Taiwan following almost a week of war games near the island. Taiwan has called Beijing’s claims to the self-governing democracy “wishful thinking” and launched its own military exercises.

Taiwan’s “collusion with external forces to seek independence and provocation will only accelerate their own demise and push Taiwan into the abyss of disaster,” Chinese Foreign Ministry spokesperson Wang Wenbin said at a daily briefing.

“Their pursuit of Taiwan independence will never succeed, and any attempt to sell the national interest will be met with a complete failure,” Wang told reporters.

China’s attempt to intimidate the Taiwanese public and advertise its strategy for blockading and potentially invading the island was nominally prompted by a visit to Taipei last week by U.S. House Speaker Nancy Pelosi.

The U.S., Japan and allies have denounced the exercises, with the Group of Seven industrialized nations issuing a statement at a recent meeting expressing its concern.

On Wednesday, Britain’s government summoned Chinese Ambassador Zheng Zeguang to the Foreign Office to demand an explanation of ”Beijing’s aggressive and wide-ranging escalation against Taiwan.”

Taiwan says Beijing used Pelosi’s visit as a pretext to raise the stakes in its feud with Taipei, firing missiles into the Taiwan Strait and over the island into the Pacific Ocean. China also sent planes and ships across the midline in the strait that has long been a buffer between the sides, which separated amid civil war in 1949.

In a lengthy policy statement on Taiwan issued Wednesday, China distorted the historical record, including the United Nations’ 1972 resolution that transferred the China seat on the Security Council from Beijing to Taipei, Taiwan’s Cabinet-level Mainland Affairs Council said. The Chinese statement also discarded a pledge not to send troops or government officials to Taiwan that was contained in previous statements.

The U.N. resolution makes no mention of Taiwan’s status, although China regards it as a foundational document proclaiming the Communist Party’s right to control over the island.

The Taiwanese council’s statement said China was orchestrating its moves against Taiwan ahead of the ruling Communist Party’s 20th National Congress to be held later this year. President and party leader Xi Jinping is expected to receive a third five-year term at the conclave, after leading a relentless crackdown on political figures accused of corruption, human rights activists and civil society groups.

Xi’s suppression of free speech and political opposition in Hong Kong was also seen as a factor behind Taiwan’s President Tsai Ing-wen winning a second term in 2020.

China says it plans to annex Taiwan under the now widely discredited “one country, two systems” format applied in Hong Kong. The concept has been thoroughly rejected in Taiwanese public opinion polls in which respondents have overwhelmingly favored the status-quo of de-facto independence.

The Chinese statement is “full of wishful thinking, and ignores the facts,” the Mainland Affairs Council said in its press release.

The “crude and clumsy political operations by the Beijing authorities further highlight its arrogant thinking pattern of attempting to use force to invade and destroy the Taiwan Strait and regional peace,” the release said.

“The authorities in Beijing deceive themselves. We warn the Beijing authorities to immediately stop threatening Taiwan with force and spreading false information,” it said.

Taiwan placed its military under high alert during the Chinese drills but took no direct countermeasures. It held artillery drills off its southwestern coast facing China that ran through Thursday, illustrating the challenges the People’s Liberation Army would face were it to launch an invasion across the strait.

Brentford vs Man Utd: Get money back as CASH if you lose, plus 107/1 tips, preview and prediction – 18+ T&Cs apply