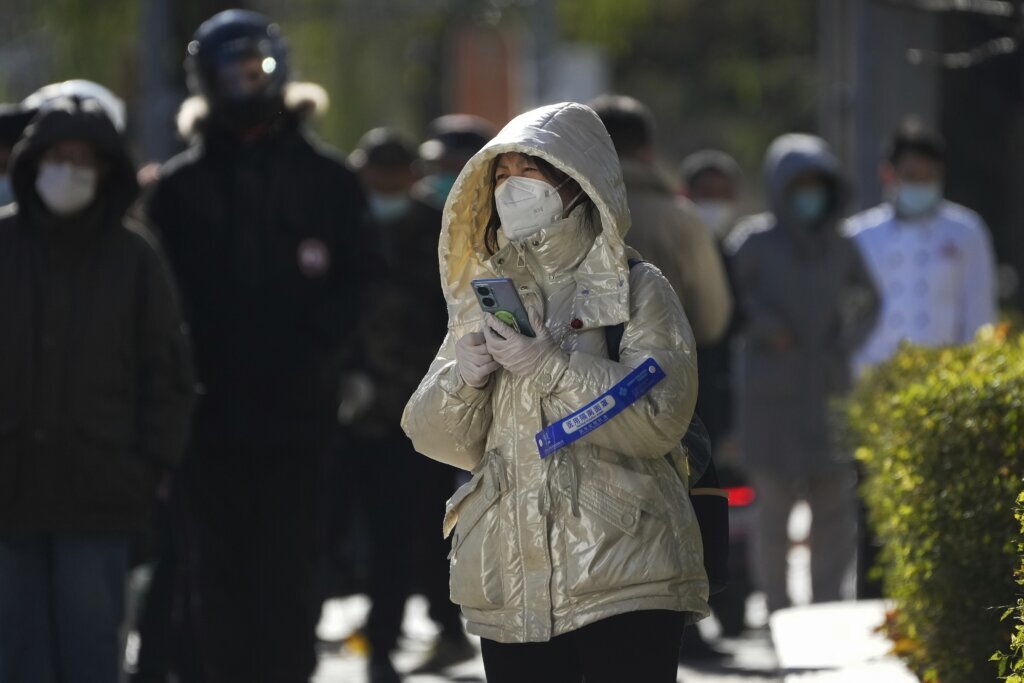 BEIJING (AP) — A campaign to vaccinate the elderly has sparked hopes China might roll back severe anti-virus controls that prompted protesters to demand President Xi Jinping resign, but the country faces daunting hurdles and up to a year of hard work before “zero COVID” can end.

Stock markets rose after the National Health Commission on Tuesday announced the long-awaited campaign. A low vaccination rate is one of the biggest obstacles to ending curbs that have confined millions of people to their homes, depressed the economy and kept most visitors out of China. Health officials gave no indication how long it might take.

A vaccination campaign will require months and China also needs to build up its hospitals and work out a long-term virus strategy, health experts and economists warn. They say “zero COVID” is likely to stay in place until mid-2023 and possibly as late as 2024.

“China is in no place right now to move away from its ‘zero-COVID’ policy toward a ‘living with COVID’ policy,” said Mark Williams, chief Asia economist for Capital Economics. “Health care capacity is very weak.”

China, where the virus first was detected in late 2019 in the central city of Wuhan, is the last major country trying to stop transmission completely. Others are relaxing controls and trying to live with the virus that has killed at least 6.6 million people worldwide and sickened almost 650 million.

Chinese protesters accuse the ruling Communist Party of failing to outline a path away from restrictions that have repeatedly closed businesses and schools and suspended access to neighborhoods. The curbs have kept case numbers lower than other countries but are seen by the public and scientists as excessive.

Families who have been confined at home for up to four months say they lack reliable access to food and medicine. Others struggle to get treatment for other medical problems. Authorities faced public fury over reports two children who were in quarantine died after their parents said anti-virus controls hampered efforts to get emergency medical care.

The protests, the most widespread show of dissent in decades, erupted Friday after a fire in Urumqi in the northwest killed at least 10 people. That prompted angry questions online about whether firefighters or victims trying to escape were blocked by locked doors or other controls. Authorities denied that, but the deaths became a focus of public anger over the human cost of “zero COVID.”

The ruling party has promised to make restrictions less disruptive and eased some controls this week following protests in Shanghai, Beijing and at least six other major cities. But party leaders said they were sticking to “zero COVID“ and gave no sign when it might end.

On Wednesday, the Health Commission reported 37,828 new cases in the past 24 hours, including 33,540 without symptoms. The official death toll stands at 5,233 out of 319,536 confirmed cases, compared with 1.1 million deaths in the United States out of almost 100 million infections.

Beijing has tried to discredit protesters by accusing them of working for “foreign forces,” a reference to long-running complaints that Washington and other Western governments are trying to sabotage China’s economic and political rise.

On Tuesday, the ruling party legal affairs committee vowed to “resolutely crack down on the infiltration and sabotage activities of hostile forces.” Its statement promising to carry out the spirit of a congress last month where Xi, China’s most powerful figure since at least the 1980s, awarded himself a third five-year term as leader.

The statement didn’t mention the protests and echoed routine declarations issued after such party meetings. But it was a reminder of the ruling party’s determination to enforce its will and of its hostility to opposition.

The National Health Commission said its campaign will encourage people over 60 to be vaccinated.

Many have avoided vaccines due to safety worries and because, with few cases in China, their infection risk was low.

The commission said it will send out mobile vaccination units to reach people in their 70s and 80s who can’t leave home.

By comparison, 93% of Americans 65 and over have received a full course of vaccine and another 2% have at least one dose, according to the Centers for Disease Control and Prevention.

State media have described unvaccinated older people as at “highest risk” from the virus.

“We hope elderly friends can actively complete the vaccination as soon as possible,” said Mi Feng, a commission spokesperson.

China uses vaccines made by domestic developers including Sinovac and Sinopharm. It has withheld approval of mRNA vaccines such as the one invented by Germany’s BioNTech, though a Chinese company bought distribution rights in 2020.

Still, ahead of Tuesday’s announcement, an infectious disease expert on Shanghai’s COVID-19 team expressed confidence China can emerge from the pandemic with the right vaccination program.

“Our diagnosis, treatment and vaccines have reached a very high level,” Zhang Wenhong said at a Nov. 18 medical conference in the southern city of Haikou. “We are fully capable of finally taming the coronavirus.”

However, China’s small, overworked health care system — especially in the poor, populous countryside — could be overwhelmed if infections spiral as restrictions are relaxed.

China has 4.3 hospital beds per person, barely half of the average of eight in neighboring Mongolia, a much poorer country, according to the World Health Organization. Japan has 13 and South Korea has 12.5.

“The epidemic will not disappear in the next three or five years, and may never,” Yu said. “It is a long-term task for China’s prevention and control.”

The outbreaks that began in October prompted affected communities to close shops and offices. Factories were required to isolate workers from outside contact.

Economists estimate those areas account for up to one-third of China’s economic output. Some forecasts say China’s annual growth will stay below 3%, less than half of 2021’s 8.1% expansion.

While case numbers are low, “there is definitely a risk that ‘zero COVID’ just fails at this point. It spreads rapidly everywhere,” said Williams. “I think that the response from the authorities would be to go back to the playbook from January, February 2020 and lock everywhere down.”

This story corrects the date of the National Health Commission’s vaccine campaign announcement. It was made Tuesday, not Monday.

No Bets Barred: Can Stephen “Wonderboy” Thompson turn it around against Kevin Holland at UFC Orlando?