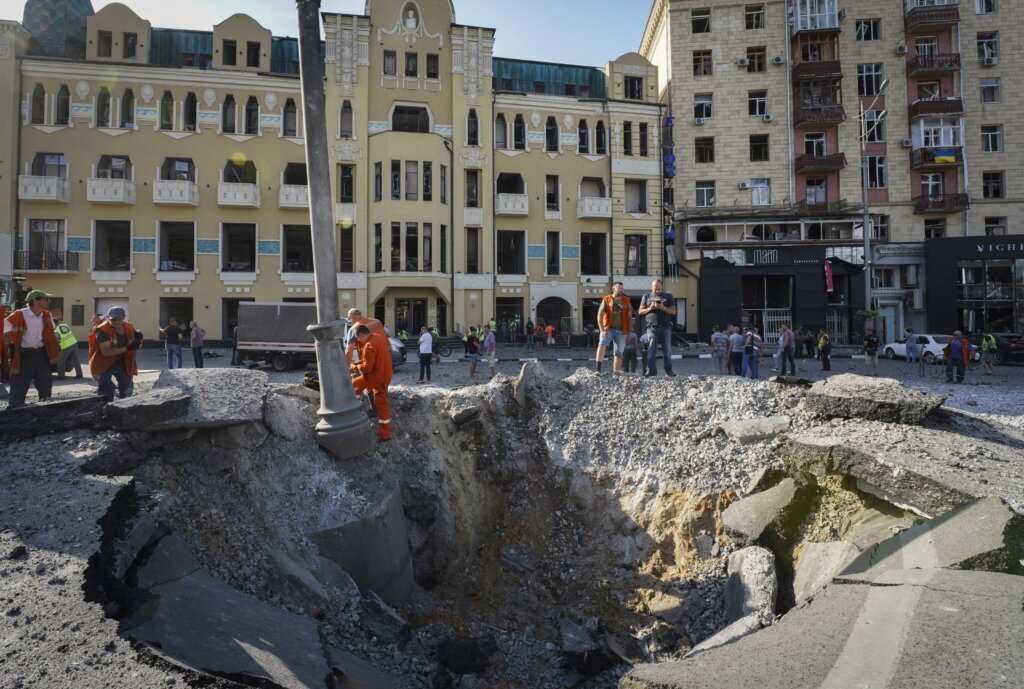 KYIV, Ukraine (AP) — Russian rocket and artillery strikes hit areas across the Dnieper River from Europe’s largest nuclear power plant, Ukrainian officials said Sunday, as fears persisted that fighting in the vicinity could damage the plant and cause a radiation leak.

Russian forces took control of the Zaporizhzhia Nuclear Power Plant soon after the war began and hold adjacent territory along the left bank of the wide river. Ukraine controls the right bank, including the cities of Nikopol and Marhanets, each of them about 10 kilometers (six miles) from the plant.

Heavy firing during the night left parts of Nikopol without electricity, said Valentyn Reznichenko, governor of the Dnipropetrovsk region. Rocket strikes damaged about a dozen residences in Marhanets, according to Yevhen Yevtushenko, the administration head for the district that includes the city of about 45,000.

In eastern Ukraine, where Russian and separatist forces are trying to take control, shelling hit the large and strategically significant cities of Kramatorsk and Sloviansk, but no casualties were reported, said Pavlo Kyrylenko, governor of the Donetsk region.

Much of the Donetsk region is held by Russian and separatist forces. It is one of two Ukrainian regions that Russia has recognized as sovereign states.

Authorities last week began distributing iodine tablets to residents who live near the Zaporizhzhia plant in case of radiation exposure, which can cause health problems.

Much of the concern centers on the cooling systems for the plant’s nuclear reactors. The systems require power to run, and the plant was temporarily knocked offline Thursday because of what officials said was fire damage to a transmission line. A cooling system failure could cause a nuclear meltdown.

Russian forces occupied the nuclear plant complex early in the 6-month-old war, but local Ukrainian workers have kept it running. The Ukrainian and Russian governments have repeatedly accused the other of shelling the complex and nearby areas, raising fears of a possible catastrophe.

Periodic shelling has damaged the power station’s infrastructure, Ukraine’s nuclear power operator, Energoatom, said Saturday. “There are risks of hydrogen leakage and sputtering of radioactive substances, and the fire hazard is high,” it said.

The U.N.’s atomic energy agency has tried to work out an agreement to send a team in to inspect and help secure the plant. Officials said preparations for the visit were underway, but it remained unclear when it might take place.