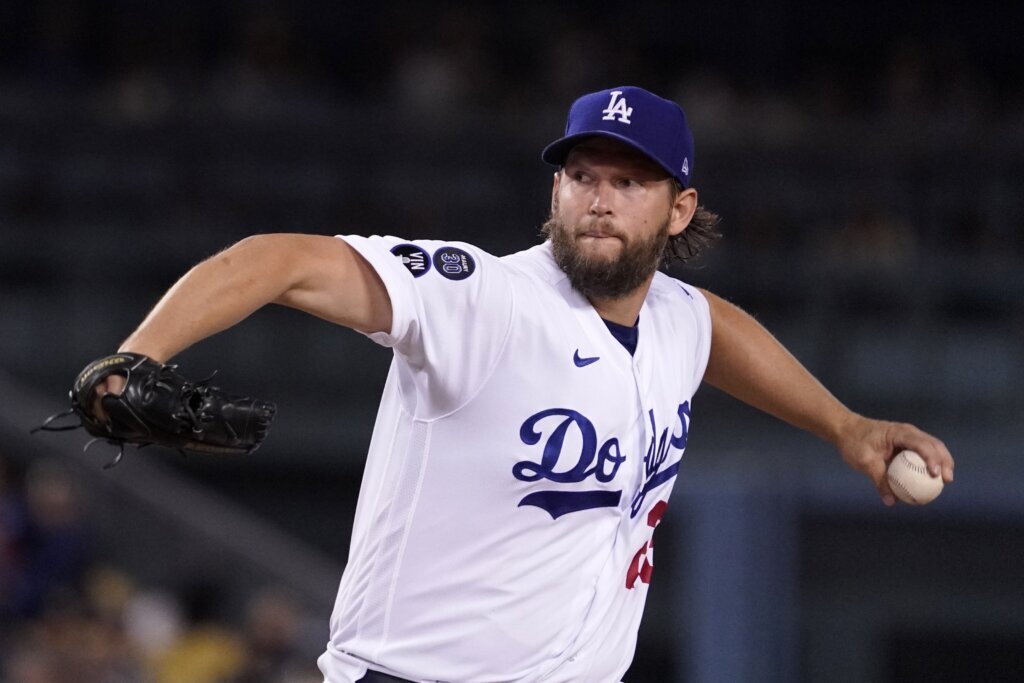 LOS ANGELES (AP) — Clayton Kershaw went six scoreless innings in his next-to-last start before the playoffs and the Los Angeles Dodgers had an eight-run fourth inning in a 10-1 victory over the Colorado Rockies on Friday night.

Cody Bellinger hit a three-run home run, Mookie Betts had a pair of doubles among his three hits and Chris Taylor also had three hits as the Dodgers improved their franchise-best record to 109-48.

Los Angeles wrapped up the best record in baseball earlier Friday when the Houston Astros lost to the Tampa Bay Rays, giving the Dodgers a home game for a potential Game 7 of the World Series.

“We’re taking care of business right now,” Dodgers manager Dave Roberts said. “The challenge now is we have five games to finish out and play well. As far as home-field advantage throughout (the playoffs), we’ve done that.”

Kershaw (11-3) cruised along by allowing just five hits with no walks and two strikeouts. He won his fourth consecutive start and has a 1.50 ERA in six starts since returning Sept. 1 from a back injury.

“I feel fine physically (but) this was a tough one stuff-wise; it wasn’t very good,” Kershaw said. “I had to grind through. A lot of guys on base and just overall didn’t have the best stuff tonight. Every once in a while that happens and you’re going to have to grind and thankfully our guys put up a bunch of runs tonight.”

Rockies starter Chad Kuhl (6-11) was roughed up for six runs on eight hits over 3 1/3 innings, while giving up three walks with two strikeouts. Colorado, which has locked up last place in the NL West, lost for the 10th time in 11 games.

“Every day is different and like I’ve mentioned over the last couple of weeks, a lot of young guys are getting a taste of the major leagues,” Rockies manager Bud Black said. “The speed of the game, seeing major league pitching, it’s a growth experience for a lot of our guys.”

Sluggish on offense for more than a week, in a stretch that included two one-run games as well as a shutout, the Dodgers broke through with their most- productive inning of the season. The eight runs and eight hits were season highs for an inning.

The productive night started modestly enough as the Dodgers led 1-0 through three innings after an RBI double from Betts in the second.

Bellinger got the fourth-inning eruption started with a three-run home run to right field, his 18th of the season and his first since Aug. 21, spanning 21 games. After Kuhl was removed following a walk to Freddie Freeman, Will Smith, Max Muncy and Trayce Thompson each had RBI hits in succession against Jake Bird.

Taylor added the final two runs of the inning on a two-run single to center field for a 9-0 lead.

Yency Almonte, David Price each pitched a scoreless inning for the Dodgers before infielder Hanser Alberto gave up a run in the ninth on a sacrifice fly from Elias Diaz. Alberto, who had an RBI double in the ninth, made his 10th appearance (11 innings) on the mound.

“It’s better when you’re on the winning side,” Alberto said about getting multiple chances to pitch. “That’s why I enjoy it more (tonight). That’s all we want at the end of the day is to win the ballgame.”

Dodgers: RHP Dustin May (back) threw a short bullpen session, his first time throwing from a mound since going on the injured list Sept 23, and has not been ruled out for a return during the playoffs. … RHP Blake Treinen (shoulder) threw from 120 feet but his timetable for a return has not been set. … 3B Justin Turner, who hasn’t played since Tuesday because of shin splints, could be in line to play Saturday. … RHP Tony Gonsolin (forearm) is back with the team after a rehab assignment at Triple-A Oklahoma City, but has not been added yet to the active roster.

Dodgers: RHP Michael Grove (1-0, 4.07) will be making his sixth career start and is coming off his first career win Sunday vs. St. Louis.