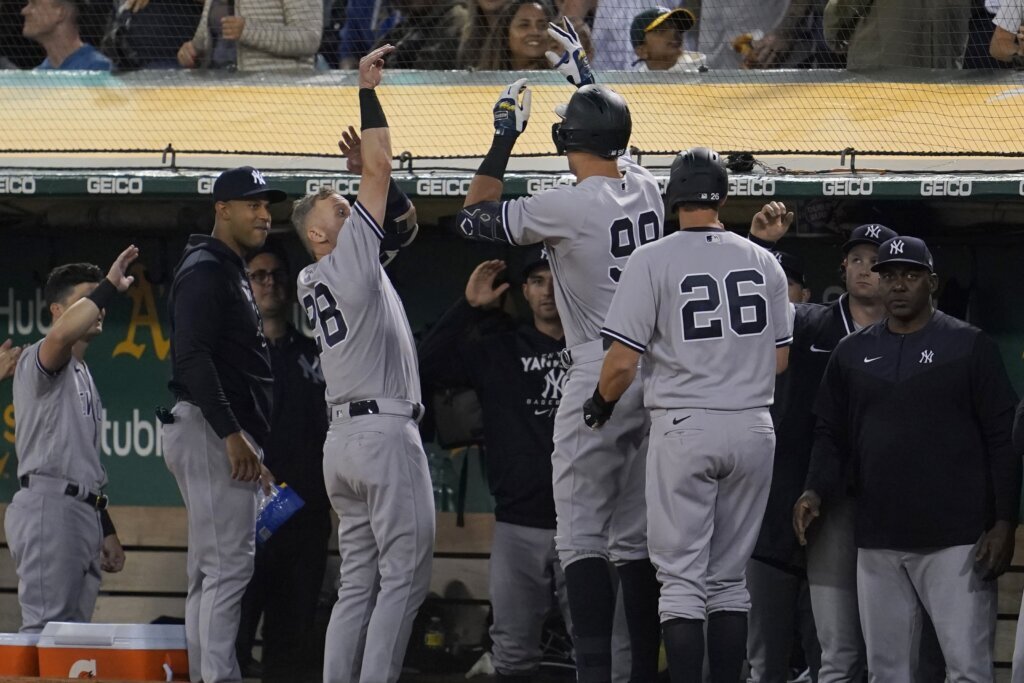 OAKLAND, Calif. (AP) — Gerrit Cole is having a blast watching Aaron Judge clobber baseballs over the fence at a…

OAKLAND, Calif. (AP) — Gerrit Cole is having a blast watching Aaron Judge clobber baseballs over the fence at a remarkable rate.

And Judge, well, he sure loves seeing Cole pile up strikeouts from his spot in the outfield.

“Especially in center field,” Judge said. “In right field you’re just kind of reacting over there, you really don’t get to see guys paint corners or what they’re doing. But when you’re in center field and can watch a guy like that work and strike out the guys he did, the sequences he did, he was on from the very first pitch he threw.”

Cole struck out 11 in his first win since July 17, and Judge hit a three-run homer in the fifth inning to help the New York Yankees beat the Oakland Athletics 3-2 on Friday night.

Judge’s 49th homer of the season was No. 200 for the Yankees, which leads the majors.

“For me, it’s really special,” Cole said. “I get to have the best seat in the house every night for the Aaron Judge show, which is one of a kind right now.”

Cole (10-6) allowed one run and three hits over 7 1/3 innings to snap a six-start winless stretch in which he’d gone 0-4 since beating Boston last month. He reached double-digit wins for the eighth time in his career.

Cole had his seventh start of the season with 10 or more strikeouts. He has 1,335 strikeouts since 2017, the most in the majors during that span.

Jonah Bride connected for his first career homer in the seventh against Cole. After Jonathan Loáisiga got the final two outs of the eighth, Wandy Peralta gave up an RBI single to pinch-hitter Dermis García but finished the 2-hour, 50-minute game for his third save.

New York faced a former Yankee for the second straight game. Left-hander JP Sears (5-1) pitched against his old team for the first time since joining Oakland in a trade for Frankie Montas and Lou Trivino before the Aug. 2 deadline.

Sears allowed Judge’s homer and eight hits over six innings with three strikeouts and four walks. Oakland’s loss came one night after allowing 20 hits in a 13-4 defeat, the most allowed by the A’s since Cleveland had 20 on July 1, 2018.

Judge, supported in the stands by friends from his church in the Central Valley city of Stockton, walked in his other three plate appearances — once intentionally. He is three homers shy of matching his career-best mark of 52 set during his AL Rookie of the Year season in 2017.

“I just try to be a good hitter, I try to be a great teammate,” Judge said. “Day in and day out that’s always my goal.”

New York’s Jose Trevino was hit by a pitch in the eighth by Jared Koenig and initially kept playing before exiting in the ninth.

Manager Aaron Boone said Trevino injured his big toe and it was painful and stiff right away.

“You fear the worst when you see it, but good news on the X-ray,” Boone said. “We’ll see what we have moving forward.”

The Yankees have won all five matchups in the season series with Oakland, which has dropped four of its last five games overall.

Yankees: OF Harrison Bader, on the 60-day injured list with plantar fasciitis in his right foot, has begun swinging a bat and could begin his running progression this weekend. He won’t be on the Yankees’ West Coast swing that includes a series in Anaheim early next week but could meet the club in Tampa, Florida, next Friday and still rehab at their facility there. … 1B DJ LeMahieu played again after a day off and will be closely monitored by the training staff the rest of the way as he deals with inflammation in his right big toe. Treatment has been helping. “It’s going to be something that we pay attention to the rest of the year,” Boone said. … All-Star LHP Nestor Cortes continues to work on flat ground after he went on the 15-day injured list Thursday with a strained left groin. “The next big challenge will be getting off the mound,” Boone said.

Athletics: OF Skye Bolt (right knee) went on the 10-day injured list a day after being hit by a pitch from Yankees rookie Greg Weissert in a wild major league debut for the reliever. Bolt threw down his bat in frustration. He felt like his kneecap slid, according to athletic trainer Nick Paparesta. “We don’t believe there is a lot of damage within the knee,” Paparesta said. “We felt it would be best to give this an opportunity for it to heal properly, get his full function and mobility back with his strength instead of kind of trying to kind of play through this a little bit and injure other things and compensate for problems that may arise.” … RHP Brent Honeywell threw 45 pitches over two innings Thursday for Triple-A Las Vegas and his next step is expected to be pitching back-to-back days out of the bullpen next week. He was shut down during spring training in late March with a stress reaction in his pitching elbow.

Yankees RHP Domingo Germán (2-2, 3.89 ERA) starts Saturday having allowed three or fewer runs in his last six outings, the second-longest such streak of his career. The A’s counter with RHP Adam Oller (2-6, 6.41) as he looks to bounce back from a loss to the Marlins. Oller is 0-0 with a 3.86 ERA in two career appearances vs. New York.

Abuse of power: US likely to probe Apple over anti-market practices