CONOR BENN says he has put his welterweight world title mission on hold to settle the family feud with Chris Eubank Jr.

The 25-year-old has climbed the 147lb rankings expertly with trainer Tony Sims but is risking it all to meet the middleweight at a 157lb middleground.

The October 8 clash at London’s O2 will come 29 years since their fathers Nigel Benn and Chris Eubank Sr clashed in their second bout that finished in a magnificent draw.

Conor roared: “This fight is for the legacy and was an opportunity I felt I couldn’t pass up.

“My team and I had other options on the table as I’m currently ranked top five with all governing bodies at welterweight and no doubt I’m looking for a world championship fight very soon.

“But this fight is embedded with so much history and I know it’s one the public really want to see. 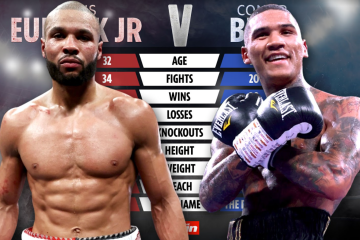 “To me this fight is personal – it’s more than titles and rankings, this is unfinished business between our families.

“And now I can’t wait for the world to be able to watch us make that happen.

“All I know is that from my side, this will be an all-out war, last man standing kind of fight.

“Neither will give up until the last bell rings. I won’t be looking to take this to the score cards though, this will be explosive from the off. I’m so up for this.”

Eubank Jr, 32, has failed to land a major world title at super-middle or the 160lbs middleweight limit.

Mexican money machine Canelo has never shown any interest in a bout and Eubank Jr walked away from a Gennady Golovkin fight in 2016.

Even with a strict rehydration clause in place, Eubank Jr will come in the taller and heavier man.

And he cannot afford to lose against his smaller and less experienced rival.

“I grew up watching their legendary battles and always wanting to emulate that, and find my own arch nemesis”, Eubank Jr Said.

“Could this now be Conor Benn? We will find out.

“He has walked the same path as I have. I know his struggle.

“Living in the shadow of a legend and trying to break out of that shadow and make his own name.

“If he can beat me, his name will be made, and he will never walk in his father’s shadow again.

“It’s a fight that’s going to spark the imagination of the British public, that’s what I’m happy about. In terms of anticipation, legacy and hype it’s the biggest fight of my career.”