CONOR MCGREGOR’S team-mate has revealed the part he played in getting Proper No 12 whiskey off the ground, before turning down $1m (£820k) from his friend for his efforts.

The Notorious sold his controlling share in the wildly successful brand in April 2021 for an eyewatering $600million (£490m).

After beating Nate Diaz in 2016, McGregor was on top of the world when Game of Thrones strongman Hafthor Bjornsson came to him with a business proposition.

But the Irishman’s close friend Artem Lobov claims that the whiskey company was in fact in his idea.

Speaking to talkSPORT, the retired 35-year-old said: “The selling point of my book will be the Proper 12 Whiskey story.

“A few people know, but this was actually my idea. I was the person who came up with the idea to do a whiskey for Conor.” 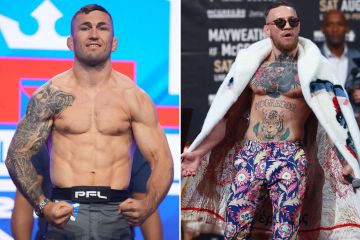 Lobov then explained: “After the second Diaz fight, me and Conor were in the gym and we were talking one day and he says to me, ‘Artem, Thor, – ‘The Mountain’ out of Game of Thrones – I was chatting to him, and he’s offered me to do my own vodka.

“He said, he was doing one in Iceland and now he’s offering me the chance to do one as well. It looks like a pretty good deal what do you think about that?’”

Lobov, who had previously earned a master’s degree in finance took the idea a step forwards.

He continued: “I said, ‘well Conor I’ll tell you one thing. Vodka is the best-selling spirit and it’s definitely something we should look into at some point.

“First of all, why would you do a Vodka in Iceland? Iceland is a beautiful country. I’ve been there before it’s amazing, but they are not known for their vodka.

“On top of that, it’s a very expensive country so the cost of making it in that country is going to be through the roof. Why would you pay a higher cost for an unknown quality? In Russia, I’m going to get you a much better deal.

“He said, ‘you go off and see what deal you can put together’ and I went on my way.”

Lobov was then able to use prior contacts to help put together an intriguing proposition.

He added: “Lucky for me, when I was studying in college, I used to work in the bar at the Radisson Hotel and I had a friend who worked in the bar with me.

“We were just two 18-year-old kids. I obviously, left and did my own thing but Ivan stayed working in hospitality and worked his way up to be the general manager of a hotel.

“He put me in touch with a man called Niall of Classic Drinks, a top drink distribution company in Ireland.

“Niall was kind enough to meet me, at the Radisson actually, and he was very generous with his information.

“Once I got that information, I went on and met all different whiskey distilleries. I called some and met some in person. I did my research and put a beautiful deal together.

“Once the deal was ready, I went to Conor and I said, ‘Conor, I have the deal ready for you. This is going to be a billion-dollar deal, no messing here.’

“I’m not sure if he took me seriously or not at the time with the billion dollars.

“I introduced Audie [Attar] and the rest of the Paradigm [Sports Management] team to my deal and all the people I was already working with and then we got going.

Proper No 12 made revenues of around $1bn (£820m) in its first year… but Lobov was dead against accepting money from his friend.

He concluded: “Conor offered me $1m but I turned it down, I didn’t accept it.

“You know, throughout my career whenever I have helped Conor with camps, he offered to pay me for them camps, but I never accepted money from him.