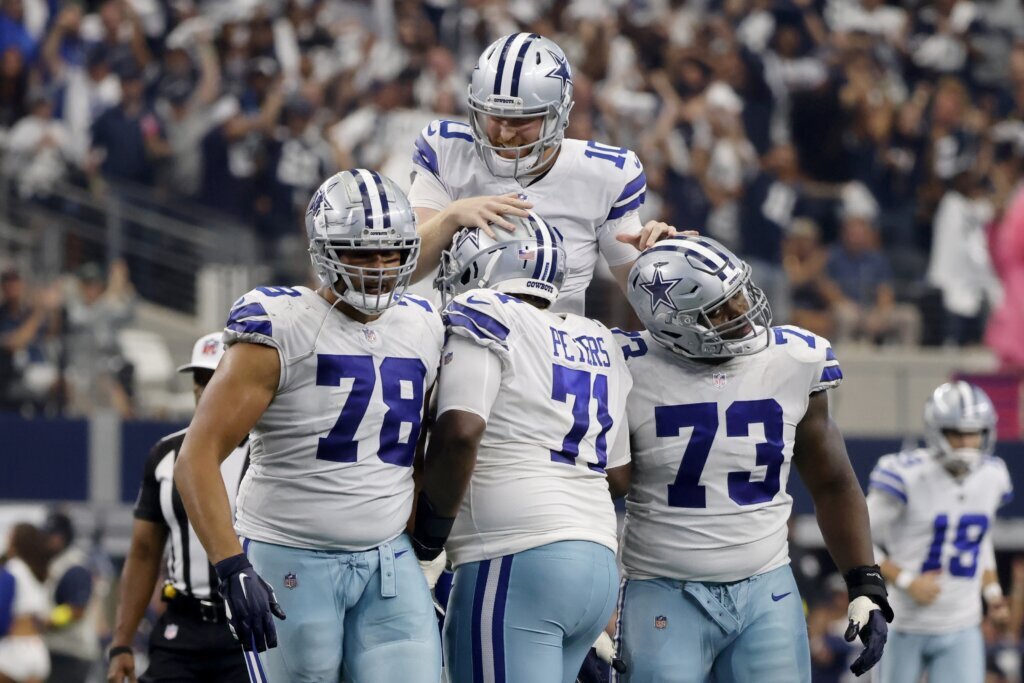 FRISCO, Texas (AP) — Cooper Rush shrugs at what he calls “QB win stats,” seeming to skip the logic that…

FRISCO, Texas (AP) — Cooper Rush shrugs at what he calls “QB win stats,” seeming to skip the logic that it’s the most important measure of a quarterback.

Winning is all Rush has done for the Dallas Cowboys in four games as an injury replacement for Dak Prescott, including three times this season after Prescott fractured his right thumb.

The first of the 2022 victories came in Week 2 against defending AFC champion Cincinnati. Now Rush is set for his fifth career start Sunday at the Super Bowl champion Los Angeles Rams (2-2).

No biggie. Just another chance to pad his “QB win stats,” and join four other undrafted quarterbacks who started their careers 5-0, including Pro Football Hall of Famer Kurt Warner.

“I’ve kind of said it all along,” All-Pro right guard Zack Martin said. “He stays like this all the time. I think that confidence is still building in him, and he’s done a great job.”

To Rush’s point, though, the Cowboys haven’t been winning with offense. In fact, last year’s No. 1 scoring offense is tied for the fewest touchdowns in the NFL through four weeks with six.

There are six teams in that group, and Dallas (3-1) is the only one with a winning record. Defense is the primary reason, but that hasn’t stopped teammates from calling their replacement QB “Cooper Clutch.”

“It’s Cooper being Cooper,” said receiver CeeDee Lamb, who has a touchdown catch each of the past two weeks. “Just for him to get this opportunity and shine a little light on him, that’s huge for him.”

Rush never has been big on the spotlight, whether now or as the unheralded Central Michigan player who won the backup job in Dallas before the Cowboys decided to replace him going into 2020.

In his first start at Minnesota last season, Rush tried to remind himself it was just “playing ball,” as he had while throwing for nearly 13,000 yards with 90 touchdowns in a pro-style offense with the Chippewas.

Rush was saying the same things early this season after Prescott was injured in a season-opening loss to Tampa Bay and the Cowboys feared they might be without their star QB until November.

Now, though, Rush is getting to the point where he can draw on his experience in the pros rather than college.

“Every snap in practice and in games is huge,” said Rush, who has thrown four TD passes without an interception this season. “I still don’t have a lot of experience but I’ve been lucky, been fortunate that I played all right.”

The outlook on Prescott improved after surgery to put a plate in his throwing hand. But he still doesn’t have enough strength to grip the ball well enough to throw in a game.

Coach Mike McCarthy said he wants Prescott to go through a full week of work. The 2016 NFL Offensive Rookie of the Year has been in the rehab group this week.

The constant questions about Prescott’s status, and the presumption that he’ll start again as soon as he can throw for real, makes the week-to-week thing even easier for Rush.

He thought it was easy from the beginning, with Joe Burrow and the Bengals visiting. Dallas won 20-17 when Rush led a short drive to a field goal on the final play.

“Real quickly, you realize you’d better be ready for this one,” Rush said. “Same thing every week. It’s the NFL. If you start looking long term, things can end bad.”

The Cowboys had their eye on the long term seven years ago when Tony Romo broke a collarbone in Week 2. Dallas was 2-0 and hoping to steal a couple of victories with what ended up being a litany of backups.

Instead, the Cowboys went 0-7 without Romo and never found their way back into contention. They lost the first four after Prescott’s gruesome season-ending ankle injury two years ago and missed the playoffs.

The current situation is a luxury Dallas couldn’t really imagine three weeks ago. Barring a setback in Prescott’s recovery, it’s guaranteed the Cowboys still will be in contention when he returns.

The players will thank the defense — and pay homage to the steady sixth-year pro deflecting any credit.

“I think it’s really cool for Cooper,” McCarthy said. “You see him have this type of success for as long as he’s been in the league. Not everyone gets that opportunity right away. He’s had to wait for his. He’s delivered.”

NOTES: The Cowboys signed long snappers Tucker Addington and Matt Overton and will have to pick one to face the Rams after Jake McQuaide’s torn triceps muscle ended his season. … Lamb didn’t practice Thursday because of a groin issue, but downplayed the situation with reporters. “I’m fine,” Lamb said. “I don’t want to scare nobody.”