COSTA RICA take on Germany in a winner-takes-all clash.

The Ticos somehow wrestled their way back into contention for a qualifying place after being hammered by Spain in the opening game.

However, a draw against Spain put them back into contention, especially with the Costa Ricans surprisingly beating the Japanese.

Nevertheless, Germany will be heavy favourites for this one.

SunSport takes a look at what to expect from Costa Rica vs Germany, including our score prediction.

Costa Rica: The Ticos looked like they didn’t have a prayer of qualifying when they lost 7-0 to Spain without having a shot.

But a surprise 1-0 win over Japan in their second match has left their fate in their own hands against the Germans.

Germany: The Germans followed Argentina in being stunned by tournament minnows as they lost their opener 2-1 to Japan.

But a 1-1 draw with Japan has kept them alive, albeit with their fate out of their own hands. 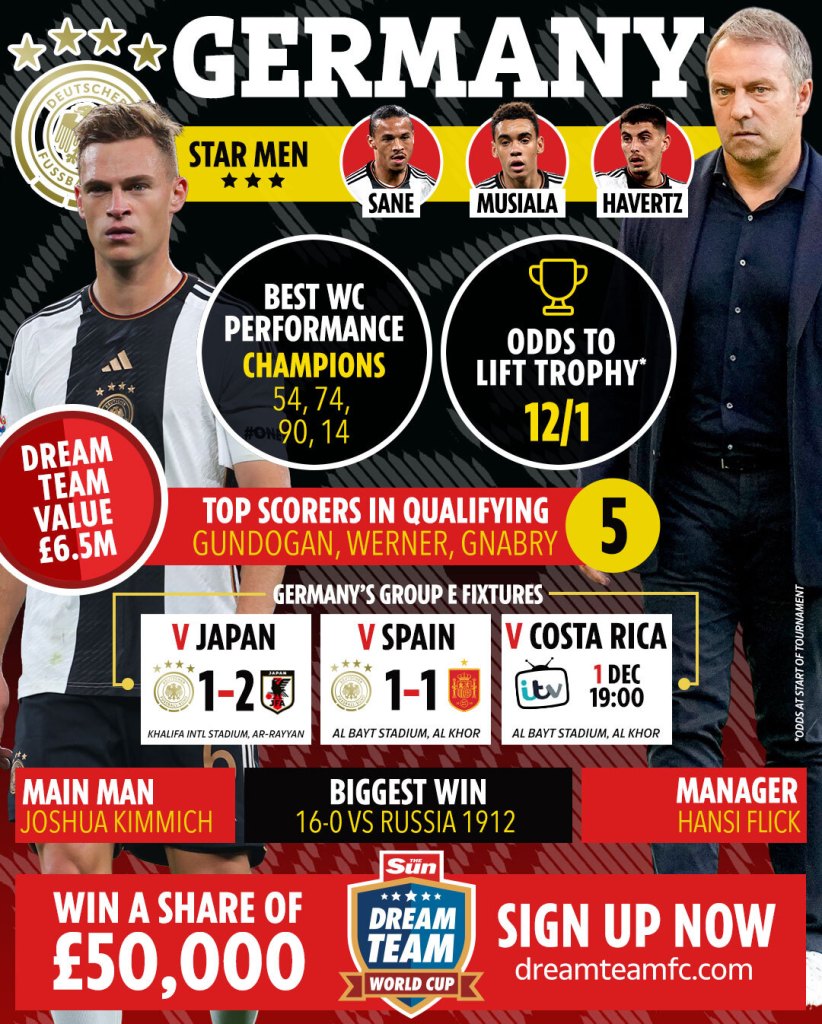 Costa Rica: The Ticos have no injuries but centre-back Francisco Calvo will miss out through suspension.

Germany: Leroy Sane returned from a knee injury to come on as a sub against Spain after missing the Japan defeat.

The former Man City star should therefore be fit to start this one if called upon.

Costa Rica: PSG goalkeeper Keylor Navas is going to need to be in top form if the Ticos are to have any chance.

Costa Rica will qualify if they beat Germany, regardless of what happens between Spain and Japan.

Should Costa Rica draw, they will go through if Japan lose.

If Costa Rica lose, they will be out.

Germany will be out if they fail to win.

If they win and Japan lose they will go through.

If Japan draw, Germany must win by two goals.

If Japan beat Spain, Germany will need to win with a huge eight-goal swing away from the Spaniards to progress.

What is the head-to-head?

The sides have met just once, when Germany ran out 4-2 winners of the opening game of the 2006 World Cup.