CRISTIANO RONALDO is reportedly annoyed with Manchester United after having to take a 25 per cent pay cut.

That’s due to the Red Devils missing out on Champions League football this season.

The dud ending to Ralf Rangnick’s tenure not only saw the club miss out on the continent’s top competition.

The clause was written into his contract when Ronnie rejoined United from Juventus last year. 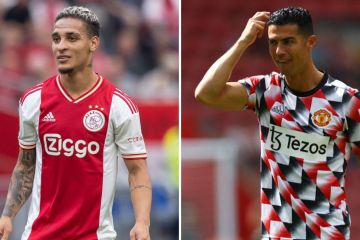 And the Portuguese legend has been giving out about the 25 per cent deduction since it kicked in two months ago.

Unhappy Ronaldo has been pushing for an exit this summer despite Erik ten Hag implementing a new style at Old Trafford.

He’s started just one of United’s four league games under the Dutchman.

And the striker could only muster a brief appearance from the bench in yesterday’s win at Southampton.

But Ronaldo has failed to attract a transfer offer from a big side, despite being linked with Chelsea and Bayern Munich.

His best option could be a return to boyhood club Sporting Lisbon.

Yet reports claim Italian giants Napoli could soon make an offer, with Victor Osimhen moving the other way.

United won’t be left light in attack should Ronaldo leave though.

That’s because they are finally closing in on Ajax winger Antony.

The Dutch club rejected a £75million bid from United on Friday.

But reports claim they have now accepted an £85m offer after Antony went public with his fury at being denied a move.

As twin towers go down, Twitter explodes with memes and ‘demolition’ humour