Cristiano Ronaldo will finally make Man Utd ‘Great Escape’… and I don’t blame him for wanting out, says Piers Morgan

The five-time Ballon d’Or winner, 37, has been vocal in his desire to quit Old Trafford after the club’s 2021-22 horror show.

Ronaldo’s agent, Jorge Mendes, has contacted Bayern Munich, Chelsea and Atletico Madrid over a summer move – with ALL three rejecting the veteran striker.

It speaks volumes of the former Real Madrid forward’s desire to escape the continually sinking ship that is Man Utd.

While fans have criticised Ronaldo for so openly trying to quit, Piers has revealed he doesn’t blame him – launching into a withering attack on United’s flops just days before the new season.

Piers told SunSport: “Ronaldo will extricate himself from his living nightmare at a rotting excuse for a giant global club that now bears no resemblance to the iconic place where he first cut his GOAT teeth. 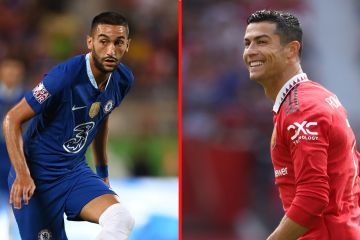 “He may be 37 but he’s still fitter than most players and scored 18 Premier League goals last season, second behind joint Golden Boot winners Mo Salah and Son Heung-min.

“Yet pathetic media snipers have blamed HIM for United’s woes which is utter nonsense.

“Without him, they’d have been fighting relegation.

“Ronaldo’s looked at the dreadfully unambitious way United’s run these days — and the woefully entitled attitude of many of the younger players — and wants to run away from this trainwreck faster than United’s fastest fan, Usain Bolt.

And Piers wasn’t holding back as he tore into United’s flops ahead of the new season.

When asked who he believed would be the biggest failures of the season, Piers bluntly continued: “Manchester United.

“The biggest bunch of overpaid, under-performing wastrels in Premier League history will have another terrible season.

“So much expensive talent but so little dedication, commitment or pride in wearing those world-famous shirts.

“But his transfer business so far has been seriously underwhelming and he will quickly discover his showboating Twitter-obsessed prima donnas just don’t have the right mentality to compete.

“I doubt they will even make the top six.”

Pelosi tells Taiwan US commitment to democracy is ‘ironclad’