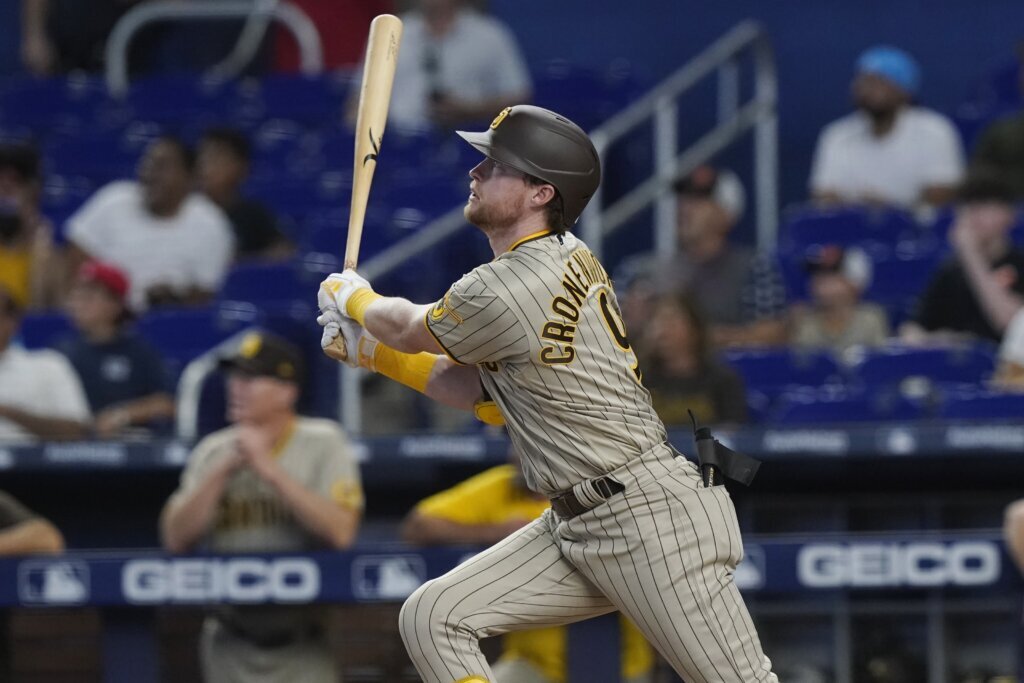 Kim went 3-for-4 with two doubles. Juan Soto reached base three times and scored twice for the Padres, who avoided a three-game sweep.

All-Star Manny Machado went 2-for-4, extending his streak of multiple-hit games to eight. The Miami native finished 6-for-11 for San Diego in the three-game series. The Padres’ Josh Bell ended an 0-for-26 skid with a double in the ninth.

Cronenworth’s two-out blast against Pablo López (7-8) followed singles from Soto and Machado and a walk to Bell. It was Cronenworth’s 12th homer this season and second career grand slam.

The Padres capped a five-run first on Kim’s RBI double.

The Marlins cut into the deficit and ended Padres starter Mike Clevinger’s outing after 4 1/3 innings. Jon Berti hit a run-scoring double in the first and Jacob Stallings added an RBI single in the fourth.

Brandon Drury had an RBI groundout in the fifth for San Diego. Brian Anderson’s run-scoring double in the bottom half got the Marlins within 6-3.

After Clevinger’s exit, Adrían Morejón (2-0) threw 1 2/3 innings of scoreless relief. Morejón struck out Charles LeBlanc and pinch-hitter Jesús Aguilar with the bases loaded to end Miami’s threat in the fifth.

Kim had a bases-clearing double in the ninth.

The Padres’ RBIs in the first were preceded by walks. Bell worked a full count against López before reaching. Trent Grisham also walked ahead of Kim’s liner to the warning track in left that scored him from first.

Marlins: LHP Daniel Castano (concussion) continues to rehab but has not begun throwing yet.

IND vs ZIM Live Streaming Details- When And Where To Watch India vs Zimbabwe Live In Your Country? India Tour Of Zimbabwe 2022, 1st ODI