DELE ALLI has been publicly slammed by his manager at Besiktas after a string of poor performances.

After an initially bright start in Turkey, Alli has failed to score in any of his last five games.

And his performances have seen him substituted in every single one of these, with the most recent game seeing him hooked at half-time.

He said: “I couldn’t affect the players [yet], now I can easily touch them, but we haven’t touched Dele Alli yet.

“Let’s not discuss Dele Alli as a player, but he is below expectations in terms of efficiency.” 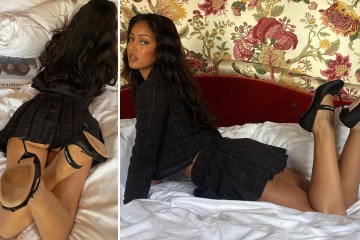 Alli moved to Besiktas on loan from Everton in the summer in the hopes of reigniting his career.

The former England international has seen his career trajectory fall off the face of the earth in the last few years.

He first struggled towards the end of Mauricio Pochettino’s reign at Tottenham, before being found wanting for both game time and form under the Argentine’s successors.

He then sealed a free transfer to Everton in January 2022 – though performance-related bonuses could see it rise all the way up to £40million.

However, he failed to impress Toffee’s coach Frank Lampard and he was shipped out on loan to Besiktas in the hopes of sparking his career back into life.

And for Alli’s sake, hopefully the recent criticism lights a fire under him which can help him get back to the standards which saw him tipped as a star for the future.

If the 26-year-old can find some form and inspire his club back into Europe it may convince them to trigger the £6m purchase clause built into the loan deal.