It is the third medal of the home games for Andrea, 17, who also won 10m platform diving gold with a staggering 357.50 points on Friday.

On Saturday she followed up with silver in the 10m synchro platform competition with partner Eden Cheng.

After her latest success, Andrea told the BBC: “It’s been incredible. We came in and wanted to have fun.

“I’m really pleased with how we executed our dives and our overall synchro. It’s been really really fun.” 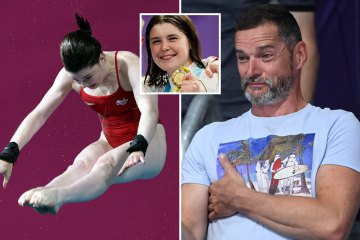 Each medal has been met with similar joy and celebrations from her famous dad, Fred.

The 50-year-old TV personality has become a household name as maitre d’ and matchmaker on the hit Channel 4 reality show.

As soon as the latest medal was in the bag, he tweeted: “It’s gold in the mixed diving 10m platform synchro.

“I’m crying! Andrea and Noah well done to you both.”

Most read in Other Sports

The First Dates star’s pride over Andrea’s debut Commonwealth showing has been enjoyed by his hundreds of thousands of social media followers.

This year is the first time mixed gender synchronised diving has been contested at the Commonwealth Games.