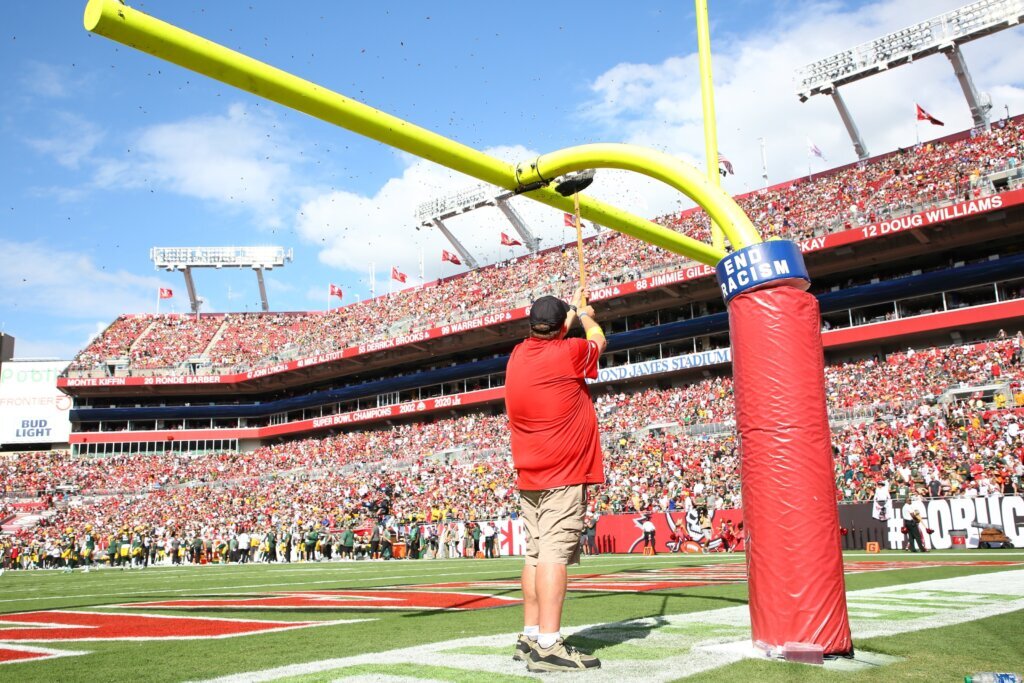 The Tampa Bay Buccaneers, who moved their football operations to South Florida to avoid Hurricane Ian, remain hopeful of being…

The Tampa Bay Buccaneers, who moved their football operations to South Florida to avoid Hurricane Ian, remain hopeful of being able to return home to play the Kansas City Chiefs on Sunday night.

The team practiced at the Miami Dolphins’ training facility on Wednesday, describing the experience as different, but insisting the disruption to their routine will not hinder their ability to prepare for the team they beat in the Super Bowl two seasons ago.

Family members, and even some pets, accompanied players and coaches in relocating ahead of the storm making landfall on Florida’s west coast.

“The biggest challenge, I think we’ve already cleared, is just keeping their families safe. Everyone’s loved ones are safe, and that’s No. 1. Houses, and the monetary things, you don’t really worry about. If the family’s safe, you can kind of concentrate on football,” coach Todd Bowles said.

“What we do is really small entertainment for people who go through a lot of rough things, and hopefully we can provide that,” Bowles added via a Zoom call from the Dolphins’ complex in Miami Gardens. “But it’s bigger than just a football team.”

NFL executive Jeff Miller said Wednesday that the game was still scheduled to be played in Tampa on Sunday night.

If the teams can’t play at Raymond James Stadium — a decision that could be made as late as Friday — the much-anticipated matchup between quarterbacks Tom Brady and Patrick Mahomes will be moved to Minneapolis.

This is not the first time the Bucs have evacuated players and families with a hurricane approaching.

Hurricane Irma forced postponement of a Week 1 matchup against the Dolphins in 2017, when the Bucs flew some players and their families to Charlotte, North Carolina, to wait out the storm.

Others chose to drive to destinations in north Florida, Alabama and Georgia, while the NFL rescheduled the game to a bye date shared by the Bucs and Dolphins.

“Everybody that wanted to come could come, familywise and otherwise, including pets,” Bowles said, adding the club initially explored the prospect of moving practice to West Virginia.

“But I think people still would have been away from their families. Even though the families could have come there, it would have been a little further away as far as hotels are situated,” Bowles said. “Miami came up, and it looked like it wasn’t going to get hit as hard. … It was an easier trip, and people who had pets and everything else, and older grandparents that were with them, could drive down to be closer to their families.”

One player — linebacker Devin White — was not able to take his animals to South Florida with him. He has a stable or horses and is an avid rider.

“I think my barn is more expensive than my house,” White said. “I’ve been watching the cameras, and I have somebody working at the barn that stayed behind. So hopefully, everybody there is safe and we can get past it.”

Bowles said the thoughts of players and coaches also were with the community they left behind.

“Our thoughts are with the city of Tampa right now. Where we have to play — hopefully it is Tampa and everything is fine. That means we’re not damaged too much,” Bowles said. “If we have to go play elsewhere, we just have to focus and lock in. No one’s going to feel sorry for us. We’ve got to be ready to play.”

Russia Plans to Use CBDC in Trade With China