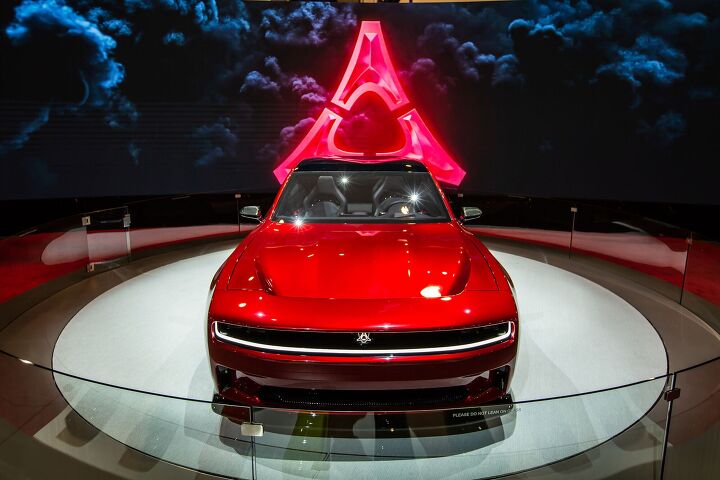 Earlier this year, the speed freaks at Dodge rolled out their Charger Daytona SRT Concept car, an all-electric glimpse into the brand’s future. At the time much noise (literal and figurative) was made about its style and so-called Fratzonic chambered exhaust – the latter remains the source of much debate.

What they didn’t tell us were power numbers – until now.

Dodge is illustrating a stair-step approach to its electrified performance, with a 400-volt system bringing entry levels of output in two flavors plus an 800-volt SRT Banshee powertrain package which will likely turn sets of rear tires into copious amounts of fine rubber dust. Think of their current Challenger menu – SXT V6, up through the R/T 5.7L and Scat Pack 6.4L onto the Hellcat range – and you’ve got the general idea of where they’re going with their EVs.

First out of the gate is a 400-volt system, offered in two basic output levels. The ‘340’ base trim will generate 455 horsepower, capable of being boosted to 495 hp or 535 hp with eStage 1 and eStage 2 kits, respectively. More on them in a moment. Next up the ladder is a ‘440’ base trim good for 590 ponies but upgradeable to 630- and 670-horse outputs with the eStage products. Sitting atop the heap is an 800-volt system whose power outputs Dodge is not yet ready to disclose but will surely crest the four-figure mark.

Compared to its present roster of internally combusted Challengers, the horsepower ladder seems to jump in similar increments but starts a lot higher up the scale. A base SXT makes about 300 horses; the least powerful 400-volt configuration, at 455 ponies, outstrips the existing R/T 5.7L and damn near beats the 6.4L Scat Pack. Despite what some of us say about the ‘scourge of electric cars’, they certainly do post some hearty numbers in the right hands.

Speaking of numbers, it is our opinion that the base trim notations of ‘340’ and ‘440’ are smart choices since they are digits that some gearheads of a certain age will readily associate with cubic inch displacements. Shrewd. This time around, they refer to the base output in kilowatts, a measure few of us this side of the pond have yet to inject in our brains as a replacement for horsepower. Those ‘eStage’ kits mentioned earlier will be upgrades that use a crystal key, one that plugs into the dash to unlock the extra horses and is tied to the car’s specific VIN. We’ll see how long it takes a 12-year-old computer hacker to get around that little stipulation.

You’ll have also noticed the Charger Daytona SRT Concept now wears a tasty coat of Stryker Red paint, a hue with which it should have been introduced instead of the dour grey which was flaunted back in August. The car will be on display at the SEMA Show in Vegas all this week.

Become a TTAC insider. Get the latest news, features, TTAC takes, and everything else that gets to the truth about cars first by subscribing to our newsletter.

Tesla’s the Best at Retaining Customers, but Many Others…

QOTD: What Car Looks Better in Person Than in Pics?