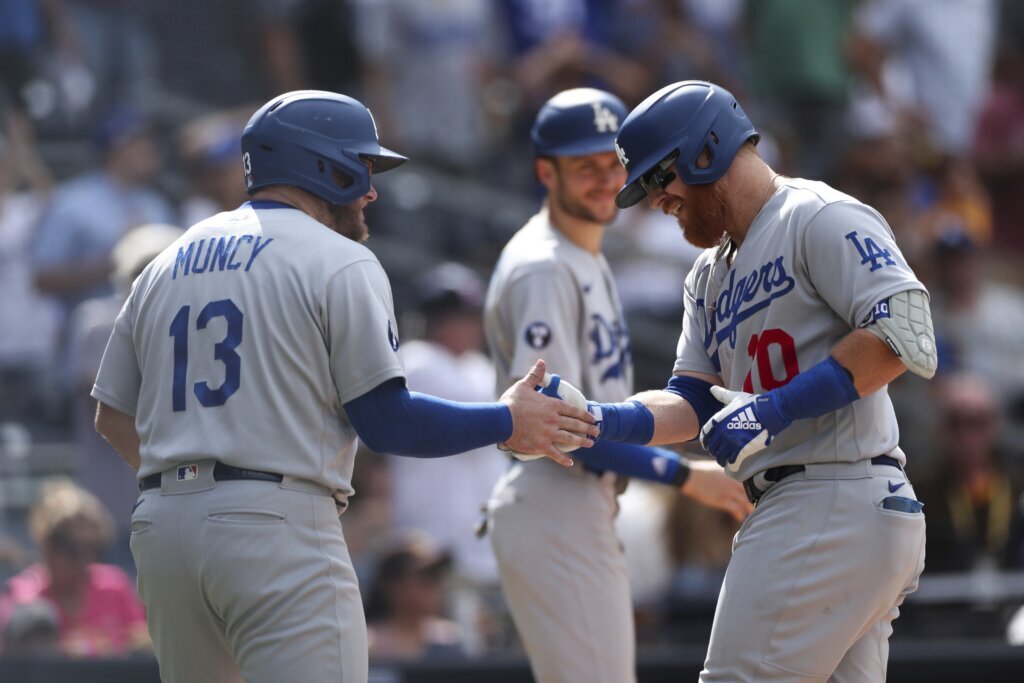 SAN DIEGO (AP) — Justin Turner hit a grand slam and a solo homer for the Los Angeles Dodgers, who…

SAN DIEGO (AP) — Justin Turner hit a grand slam and a solo homer for the Los Angeles Dodgers, who emphatically became the first team to clinch a playoff spot this season with an 11-2 victory Sunday over the San Diego Padres.

Los Angeles, with the best record in the majors at 96-43, sealed a playoff berth for the 10th straight season. The Dodgers did their usual post-victory handshake line.

With thousands of their blue-clad fans cheering them on at Petco Park, the Dodgers reduced to two their magic number for winning the NL West for the ninth time in 10 seasons.

Max Muncy hit a go-ahead, two-run, bases-loaded single in the sixth inning and Chris Taylor and Trea Turner also homered for the Dodgers, who won their eighth straight series against the Padres dating to June 2021. The Dodgers have beaten the Padres 12 times in 15 games this year and for the 21st time in their last 25 games.

It was such a blowout that the Padres had first baseman Wil Myers pitch the ninth, and Trea Turner drove his first pitch into the third balcony of the brick warehouse in the left field corner for his 20th homer. It was Myers’ fourth pitching appearance this season and second against the Dodgers.

The Padres’ lead over Milwaukee for the NL’s third wild-card spot was reduced to two.

Padres All-Star right-hander Joe Musgrove (9-7) had a 2-0 lead after three innings before Justin Turner homered to left with one out in the fifth and Taylor homered to center with two outs.

Musgrove loaded the bases with one out in the sixth before Muncy chased him with a single to right that gave the Dodgers a 4-2 lead.

The Dodgers blew it open with a six-run seventh against the Padres’ bullpen. Trea Turner hit an RBI single off Robert Suarez and Tim Hill walked Muncy with the bases loaded. Craig Stammen came on and Justin Turner drove his first pitch deep into the seats in left for his second career slam.

It was Justin Turner’s 14th career multi-homer game. He has 13 homers this season.

Musgrove, who made his first All-Star team this season, allowed four runs and six hits in 5 1/3 innings, struck out five and walked one. He lost for the seventh time in eight decisions over 14 starts.

Andrew Heaney (3-2) allowed two runs, one earned, and three hits in five innings. He struck out six and walked two.

San Diego’s Jake Cronenworth homered with two outs in the second, his 16th.

Dodgers: Muncy was back in the lineup as DH after sitting out the last two games after getting a cortisone shot in his left knee.

Padres: Haven’t named a starter for Tuesday night’s opener of a two-game series at Seattle.