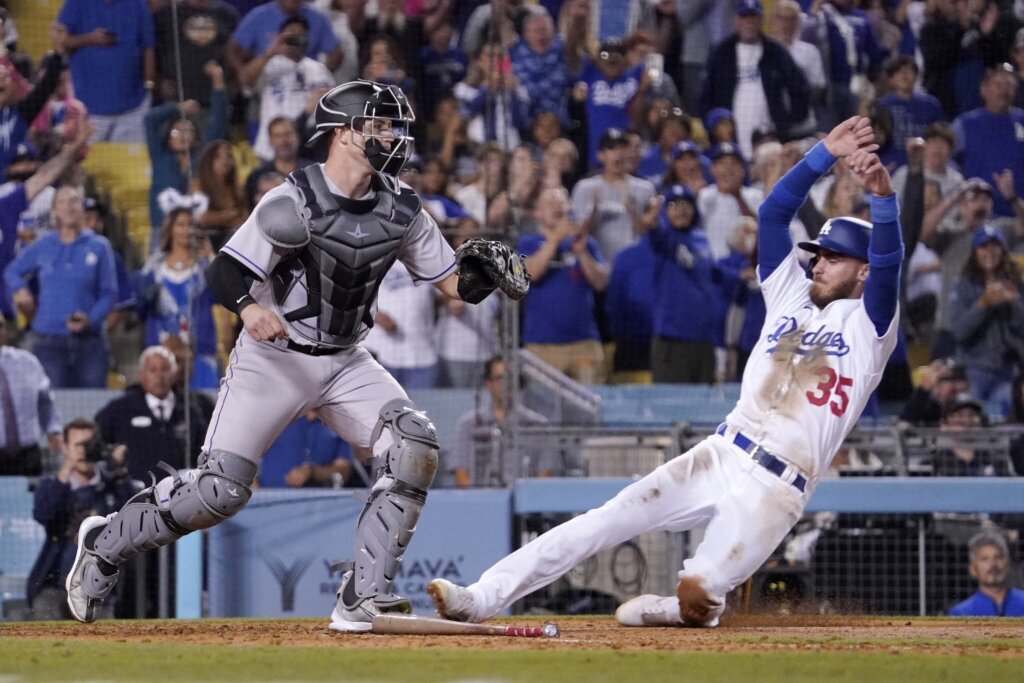 LOS ANGELES (AP) — Cody Bellinger scored the winning run on Mookie Betts’ infield single with the bases loaded in the ninth inning, and the Los Angeles Dodgers edged the Colorado Rockies 2-1 on Wednesday night to complete a three-game sweep.

Dodgers starter Mitch White and three relievers combined to allow only one hit — a single by Brendan Rodgers in the sixth.

Bellinger, who had three hits, and Gavin Lux opened the ninth with back-to-back singles. Lux hit a bleeder to the open left side of the infield with the shift on that allowed Bellinger to reach third.

The Rockies then went to a five-man infield, bringing in center fielder Garrett Hampson and leaving only Kris Bryant and Charlie Blackmon to patrol the outfield. Pinch-hitter Will Smith drew a walk to load the bases for Betts with nobody out.

Betts hit a bouncer over the head of reliever Daniel Bard (3-3). Two infielders converged on the ball just behind the mound, and shortstop José Iglesias was unable to handle it cleanly as he tried to make a quick play to the plate with his momentum carrying him toward first base.

The speedy Bellinger dashed home safely, and the Dodgers improved to 5-8 in one-run games this season.

Los Angeles closer Craig Kimbrel (2-4) returned after taking a line drive off his back last week and retired the side in the ninth for the win.

The Dodgers, who finished with nine hits, had runners on first and second in the eighth when Jake Lamb took a called third strike to end the inning.

Los Angeles tied it 1-all in the seventh. With two outs, Bellinger and Lux singled back-to-back and Austin Barnes got hit in the back by a pitch from Jake Bird to load the bases. Bird threw a wild pitch that allowed Bellinger to score before Betts grounded out to end the inning.

After failing to get a hit off White through five innings, the Rockies took a 1-0 lead in the sixth. Bryant walked and Rodgers singled to center, with Bryant scoring on a throwing error by Bellinger.

White gave up one unearned run in 5 2/3 innings. The right-hander struck out six and walked four on a season-high 102 pitches.

Rockies starter José Ureña allowed one run and five hits in 6 2/3 innings. The right-hander struck out two and walked three after being called up from Triple A-Albuquerque earlier in the day.

Dodgers: OF Chris Taylor went on the injured list for the second time in his career with a fracture in the arch of his left foot. Manager Dave Roberts said it’s “a safe bet” Taylor won’t be back before the All-Star break. Taylor got hurt last weekend and left Monday’s game with swelling. … RHP Blake Treinen (right shoulder) will throw 25 pitches off a mound Thursday.

Rockies: LHP Austin Gomber (4-7, 6.53 ERA) starts Thursday at Arizona in the opener of a four-game set. He returned to the rotation last week after two appearances in relief. He’s 2-0 with a 4.67 ERA in four career appearances against the Diamondbacks.