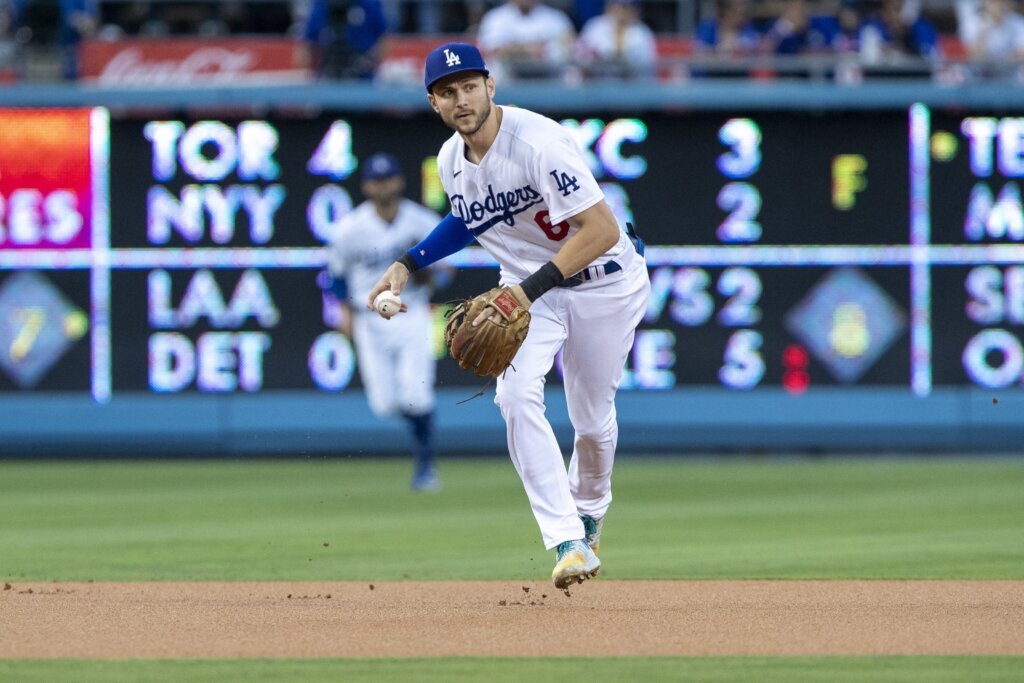 LOS ANGELES (AP) — Will Smith’s fielder’s choice-grounder scored Mookie Betts with the go-ahead run in the eighth inning, and…

Betts scored on the bizarre play in which Marlins catcher Jacob Stallings abandoned the plate. Third baseman Jon Berti fielded Smith’s grounder and wanted to throw home, but Stallings had moved toward first base, leaving no one at the plate.

Betts tripled leading off, Trea Turner grounded out and Freddie Freeman was intentionally walked to set up Smith.

Trayce Thompson’s stellar defense robbed Nick Fortes of a potential tying homer leading off the ninth. He leaped to make the catch and crashed into the center field wall but held onto the ball.

Chris Martin (4-0) got the victory with one inning of relief. Evan Phillips pitched the ninth to earn his second save as the major league-best Dodgers improved to 22-6 since the All-Star break.

Former Dodger Dylan Floro (0-2) gave up one run and one hit in one inning of relief.

The Dodgers tied the game 1-1 on Thompson’s RBI double down the third-base line in the seventh. Justin Turner, who singled leading off, scored on left fielder Jerar Encarnación’s throwing error that missed the cutoff man and allowed Thompson to take third.

Encarnación’s RBI double with two outs in the seventh gave Miami a 1-0 lead.

Miami starter Jesús Luzardo allowed one run and four hits in 6 1/3 innings. The left-hander struck out seven and walked two.

Dodgers starter Tyler Anderson gave up one run and five hits in seven innings. The left-hander struck out six and walked three.

Marlins: Placed 1B/DH Garrett Cooper on the injured list with a concussion.

Dodgers: LHP Clayton Kershaw (low back pain) tossed a bullpen session off the mound. Next up is another bullpen, followed by a simulated game and then he’ll likely be activated if all goes well. … RHP Brusdar Graterol (shoulder) is set to return to the Dodgers on Monday. … RHP Yency Almonte (right elbow tightness) will throw the next few days in a row.

Dodgers: RHP Dustin May makes his season debut Saturday. He underwent Tommy John surgery in May 2021. He recently made his fifth and final start for Triple-A Oklahoma City, compiling a 1.89 ERA with 33 strikeouts over 19 innings.