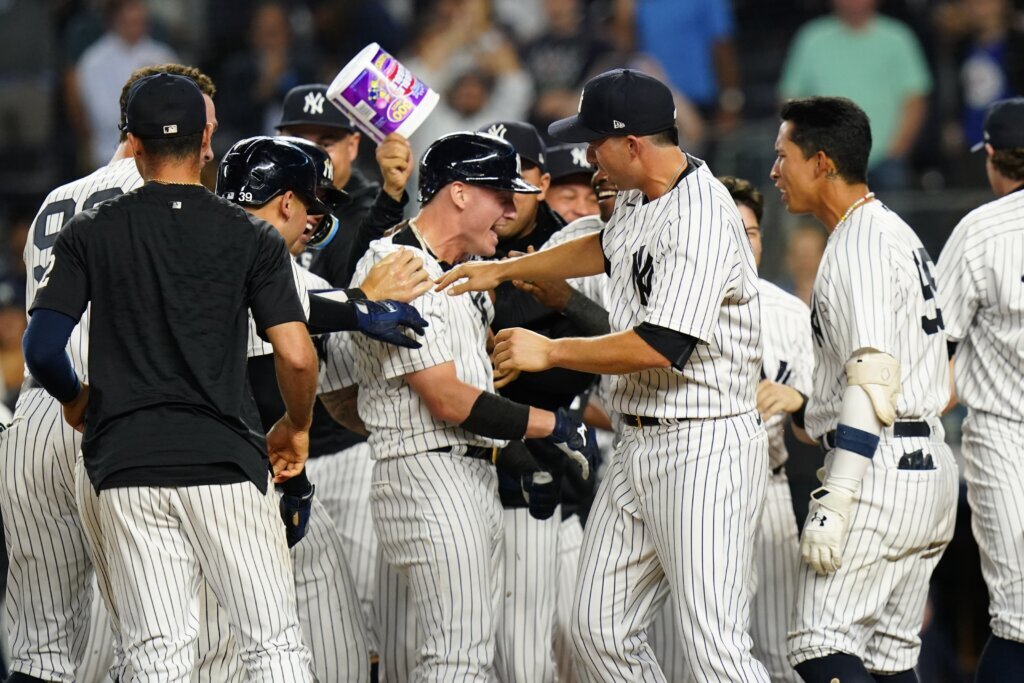 NEW YORK (AP) — Josh Donaldson hit a walk-off grand slam in the 10th inning as the clock struck midnight, and the struggling New York Yankees salvaged an 8-7 win over the Tampa Bay Rays on Wednesday night to avoid a three-game sweep.

Gleyber Torres singled leading off the 10th of Jalen Beeks (2-2) and Anthony Rizzo walked before Donaldson lifted a one-strike, 97 mph fastball to the short porch in right field. He flipped his bat and raised his arms immediately after he connected.

Aroldis Chapman (2-3) gave up three runs in the top of the 10th for New York, which entered having lost three straight and 12 of 15.

But the Yankees finally got some help from their offense, scoring more than three runs in a game for the first time since Aug. 8. New York had totaled one run in its past three games.

This one took 3 hours, 48 minutes, not including a rain delay in the seventh inning that paused play for more than an hour and pushed the finish to midnight. It was worth the wait for the Yankees.

Although the Yankees are 9-16 since the All-Star break, their AL East lead moved back to 10 games over Tampa Bay and Toronto. New York has led the division by double digits for all but two days since June 13.

Rizzo led off eighth with a homer off Brooks Raley to tie it at 4-4. The game went to extra innings when Ryan Thompson retired major league home run leader Aaron Judge on a warning-track flyball.

Chapman relieved Scott Effross and issued two walks to load the bases. With two outs, Francisco Mejía sliced a 101 mph, 0-2 fastball down the right field line for a bases-clearing double.

Yandy Díaz matched a season high with three RBIs, hitting an RBI double in the third and a two-run double in the fifth off Domingo Germán as the Rays’ four-game winning streak ended.

Tampa Bay’s Harold Ramírez added a solo homer in the sixth in his second game back from a fractured right thumb.

Torres started New York’s comeback with a two-run homer in the sixth off Corey Kluber. Judge’s bases-loaded walk in the seventh got the Yankees within 4-3, but Pete Fairbanks got Torres to hit into an inning-ending double play.

Tampa Bay jumped ahead with one out in the first when Díaz doubled over left fielder Andrew Benintendi and Jose Siri scored from first when the Yankees missed the cutoff man.

The Rays had three straight one-out hits in the fifth and took a 3-0 lead when Díaz doubled down the left-field line. Ramírez opened the sixth by reaching the left field seats for his fifth homer.

For the first time in franchise history, the Yankees started three players wearing jersey numbers in the 90s.

Besides Judge’s No. 99, callup Oswaldo Cabrera was given No. 95 and Estevan Florial was wearing No. 90.

New York has four players with jersey numbers above 90 as reliever Ron Marinaccio wears No. 97.

Rays: SS Wander Franco (right hamate bone) was held out of Triple-A Durham’s lineup with soreness in the hand. He is expected to resume his rehab assignment Thursday.

Yankees: INF DJ LeMahieu (right big toe) did not start for the fourth straight game singled as a pinch-hitter in the eighth. LeMahieu said he expects to start Thursday. … OF/DH Giancarlo Stanton (Achilles tendon) could begin a rehab assignment this weekend and may return next week. … RHP Clay Holmes (back), who last pitched Friday, was placed on the injured list.

Rays: Open a four-game series against visiting Kansas City Thursday. The Rays did not announce a starter.

Solar-powered civilisation is the future, says Elon Musk in a tweet