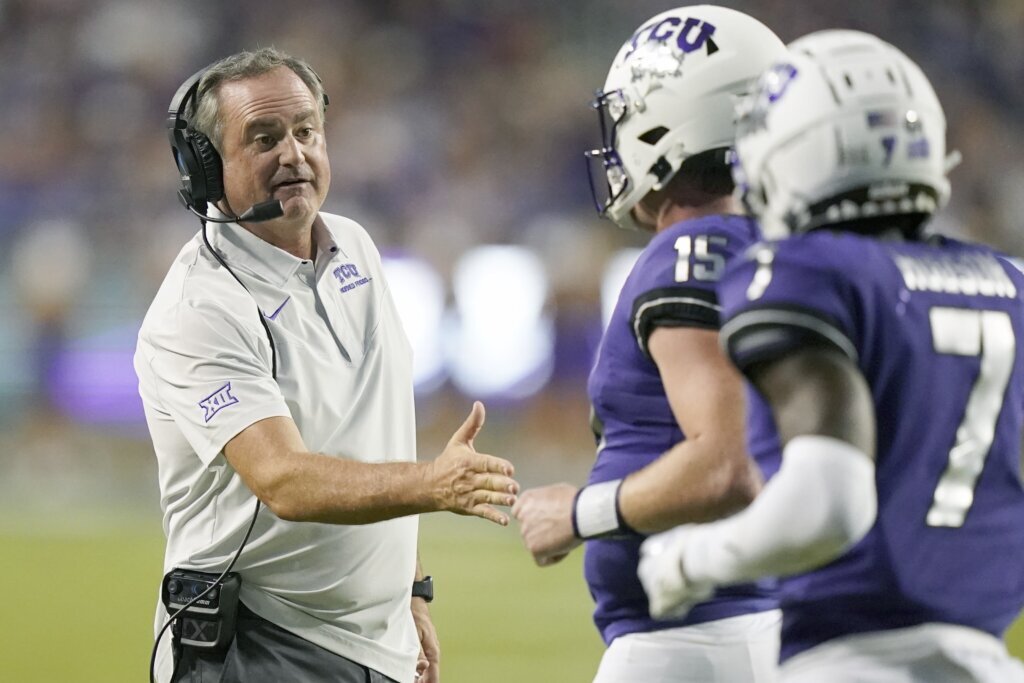 Duggan set career highs for yards and TDs while playing less than three full quarters in his 30th career start for the Frogs (2-0). It came a week after former Oklahoma transfer Chandler Morris started their season-opening 38-13 win at Colorado before suffering a sprained left knee late in that game.

“With injuries, it’s no fun for anybody. … Obviously we both want to play, everybody wants to play, but understanding your role, when that is and helping each other out, I think you’ve seen that the last couple of weeks, and last year,” said Duggan, who dealt with a fractured bone in his foot last season. “It’s not all on me. There’s 10 other other guys on offense that have got to do their job and do it to a standard. I think you saw that tonight.”

TCU led 28-0 when Duggan tossed a 2-yard score to Quincy Brown early in the second quarter. Duggan found receivers wide open for TDs on each of TCU’s first two drives of the game — Derius Davis from 19 yards out, then Jared Riley on a 6-yarder.

“Max made good decisions, got the ball out to the guys who can make plays and, looked like a guy that was on his 30th start,” Dykes said. “That was what stood out to me, was just his experience, his comfort.”

Brown added a 17-yard TD catch on the Frogs’ first drive after halftime that made it 45-14, though he sprained his ankle on that play.

Dykes is the 11th full-time head coach for the Frogs since Meyer, who won 109 games over his 19 seasons (1934-52). His tenure included the school’s only national championship, an undefeated season in 1938 with Heisman Trophy winner Davey O’Brien.

Beau Allen threw for 210 yards with a TD and two interceptions for Tarleton, which is in the third season of a four-year reclassification period from NCAA Division II to the FCS level as a member of the Western Athletic Conference.

“It got lopsided there and got out of hand. I thought we got off to a slow start. We really wanted to avoid that,” Tarleton coach Todd Whitten said. “TCU’s got a very good team. They’re really fast. … We had a lot of trouble with their speed.”

Darius Cooper had an acrobatic 21-yard catch from Allen for Tarleton’s first touchdown. He was able to get a foot down in the front corner of the end zone after leaping up and reaching back to make the catch. Cooper finished six catches for 117 yards.

Tarleton: The Texans played a Power Five program for the first time in school history, two seasons after beating New Mexico State 43-17 in their only previous game against an FBS team. They still had zero total yards when they fell behind 21-0 against TCU, and finished with 295 yards.

TCU: The Frogs’ 10 offensive drives before a lost fumble into the end zone midway through the fourth quarter resulted in eight touchdowns, a field goal and a missed field goal. They finished with 630 total yards, and didn’t punt until 1:44 was left in the game. Sam Jackson, who began the season as the third-string QB, was 4-of-4 passing for 58 yards, and had a 1-yard TD run. There were 15 different players who caught passes.

This was the Frogs’ first home opener without Gary Patterson as head coach since 2001, when they lost to FCS team Northwestern State in that game. They have since won their last 15 games against lower-division teams by an average margin of 43 points. Patterson went on to be the school’s winning coach with 181 wins. That included an undefeated 2010 season capped by a Rose Bowl victory before his departure eight games into last season.

TCU: An open date before playing Sept. 24 at SMU, where Dykes was head coach the past four seasons. It will be the 101st meeting overall between the former Southwest Conference rivals.