EDDIE HEARN thought Anthony Joshua was about to beat Oleksandr Usyk during the ninth round of their rematch on Saturday night.

The Matchroom chief saw his man rock Usyk – only for the Ukrainian to come roaring back in round ten.

Hearn, 43, has graciously admitted that AJ was deservedly beaten by Usyk… but he thought it was about to be stopped in his man’s favour in round nine.

“In the ninth round I ran over, I thought we had him.

“The tenth round was one of the best rounds I’ve seen to turn the right, not back around because it was very close at that point, but what Usyk did in the tenth, 11th and 12th was incredible and that was the difference. 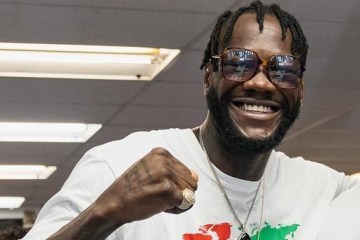 “AJ didn’t start fast enough but he fought a much better fight. He hurt Usyk badly in the ninth and I thought he was going to come on strong, but Usyk came out like a train and, as I said, that tenth round was the moment he decided to regain the fight.

“It was an incredible performance. He’s just too good, and there’s no shame in it.

“They asked me what I thought when I got in (the ring).

“Going into those rounds I had it very close, possibly AJ one round up after the ninth, but the championship rounds showed a championship fighter, a pound-for-pound great and that was the difference.

He just exploded because he lost and he was devastated

“It was a great performance from Anthony Joshua.”

AJ, 32, was criticised after the fight for throwing the belts out of the ring and hijacking the mic for an impromptu speech.

But Hearn believes his fighter’s response was “human”.

He said: “You saw the reaction from AJ, and that was from a human who wanted to win so badly with so much pressure on his shoulders.

“I think he just exploded because he lost and he was devastated, and he’s given everything to try and win this fight.

“He couldn’t win the fight, he’s a competitor, he’s a winner but this man’s too good.”