EFL Cup second-round results: Fulham KOd by lowly Crawley but Prem sides get through – and Jimenez celebrates as pirate

CRAWLEY shocked Fulham in the biggest upset of a busy night of Carabao Cup second round action.

Boss Kevin Betsy got one over his former side as he masterminded a brilliant result for the League Two side.

Striker Tom Nichols struck his side into a 16th minute lead, before emulating Kansas City ace Lo’Eau Labonta in feigning injury before TWERKING in celebration.

James Balagizi made it 2-0 in the 49th minute – with Marco Silva’s much-changed side unable to get back into the game.

Leicester City, meanwhile, got away with one at League Two Stockport.

Brendan Rodgers made ten changes to his side for the trip to Edgeley Park, and subsequently watched his side fail to score against newly-promoted County. 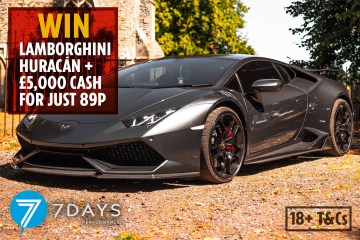 The Foxes scraped past their lowly opponents on penalties, Kiernan Dewsbury-Hall netting the winning spot kick in the 3-1 shoot-out triumph.

Jordan Hugill gave Dean Smith’s side a 22nd minute lead, only for Emiliano Marcondes to equalise on the stroke of half-time.

The Cherries hammered on the door as they tried to find a winner, only for Adam Idah to tap home Teemu Pukki’s centre seven minutes from time. 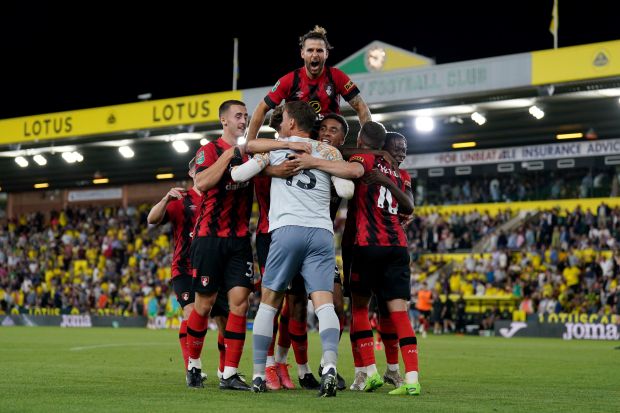 That wasn’t the final action, however, with Brooklyn Genesini equalising for Scott Parker’s side in the 92nd minute, with Bournemouth going on to win it 5-3 on penalties.

Other Prem sides were forced to survive scares against lower league opposition.

Aston Villa went 1-0 down at League One Bolton, but managed to equalise when Douglas Luiz’s corner curled all the way in.

Danny Ings then gave them the lead from the penalty spot, before Lucas Digne and Leon Bailey sealed an eventually comfortable 4-1 win.

Wolves beat Championship Preston 2-1 at Molineux, with Raul Jimenez brilliantly donning an eye-patch and hook in a pirate-themed celebration.

Adama Traore doubled Bruno Lage’s side’s lead with a brilliant effort, before Ben Woodburn got Preston back into the contest.

Nottingham Forest, having signed 16 players this summer, relied on two stars that were there last season as they won 3-0 at Grimsby.

Ryan Yates got the scoring underway, before a Sam Surridge brace made it comfortable.

Southampton were similarly comfy at Cambridge, with Che Adams at the double and Dominic Ballard scoring in a 3-0 win.

Brentford won 2-0 at League Two Colchester via goals by Keane Lewis-Potter and Mads Bech Sorensen – while Crystal Palace waited until the final 20 minutes for Odsonne Edouard and Luka Milivojevic to net in a 2-0 triumph at Oxford.

MK Dons surprisingly find themselves 22nd in League One… but managed to win 2-0 at Championship high-flyers Watford thanks to goals by Matthew Dennis and Darragh Burns.