Elon Musk sells Tesla shares worth $6.9 bn months after saying he was done


Elon Musk sold $6.9 billion of shares in Tesla Inc. according to regulatory filings Tuesday, just months after saying he didn’t plan to sell any more stock in the pioneering electric-car maker.


Tesla’s chief executive officer offloaded about 7.92 million shares on Aug. 5, according to the new filings. The sale comes just four months after the world’s richest person said he had no further plans to sell Tesla shares after disposing of $8.5 billion of stock in the wake of his now-pulled deal to buy Twitter Inc.


Musk, 51, has now sold around $32 billion worth of stock in Tesla over the past 10 months. The disposals started in November after Musk, a prolific Twitter user, polled users of the platform on whether he should trim his stake. The purpose of the latest sales wasn’t immediately clear.


Tesla shares have risen about 35% from recent lows reached in May, though are still down about 20% this year. 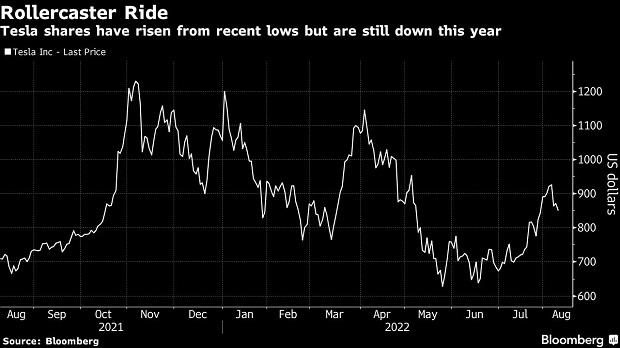 With a $250.2 billion fortune, Musk is the world’s richest person, according to the Bloomberg Billionaires Index, but his wealth has fallen around $20 billion this year as Tesla shares declined.


Musk last month said he was terminating his $44 billion agreement to acquire Twitter and take it private, claiming the company has made “misleading representations” over the number of spam bots on the service. Twitter has since sued to force Musk to consummate the deal, and a trial in the Delaware Chancery Court has been set for October.


At the weekend, Musk tweeted that if Twitter provided its method of sampling accounts to determine the number of bots and how they are confirmed to be real, “the deal should proceed on original terms.”


In May, Musk dropped plans to partially fund the purchase with a margin loan tied to his Tesla stake and increased the size of the equity component of the deal to $33.5 billion. He had previously announced that he secured $7.1 billion of equity commitments from investors including billionaire Larry Ellison, Sequoia Capital and Binance.

RBI policy: How inflation, repo rate and demand are linked to each…