To hear some of the commentary, you’d think that the past 12 months had brought the world’s transition away from fossil fuels juddering to a halt. With prices of natural gas and coal heading to record highs and those for crude oil not far below their 2008 peak, the world seems more hooked on carbon than ever.


Plans to shift to clean energy are “a chain of sandcastles that waves of reality have washed away,” Amin Nasser, chief executive officer of Saudi Arabian Oil Co., said in a speech in Switzerland last week. We’ve been watching “the revenge of the fossil fuels,” according to Thierry Bros, an expert in natural gas at Sciences Po in Paris.


In the midst of this third energy crisis, its the legacy of the first two — prompted by the 1973 Arab-Israeli war and the 1979 Iranian Revolution — that’s loomed largest. If history repeats itself, those swaggering figures of 1980s popular culture — the Gulf oil sheikh and Texan oil baron— suggest that such emergencies always result in a victory for petroleum and its producers. The lesson of the first oil embargo, according to Marino Auffant, a historian of the crisis, is that “the world emerged from it more dependent on Persian Gulf hydrocarbons than ever before.”


That’s a compelling narrative — but it’s not true. Those geopolitical upheavals certainly didn’t result in the end of petroleum — but they dealt it a blow that it never really recovered from. In the US, it took two decades for crude consumption to return to the levels of 18.5 million barrels a day it hit in 1978, on the eve of the second oil crisis. The countries of the European Union have never reverted to their 16.9 million daily barrels demand levels of 1979, despite an economy that’s more than twice as large as it was back then.


Oil in 1973 made up about half of the world’s primary energy consumption. It’s now 31%. The shift, particularly in relation to the members of the Organization of Petroleum Exporting Countries, was brutally fast: between 1973 and 1985, the share of the world’s energy derived from OPEC’s crude fell from 25% to 11%. It’s never risen back substantially above those levels. The early 1980s in the Gulf states were characterized not by newfound wealth, but by an uncharacteristic wave of recessions and (relative) austerity, as the demand slump pushed the world’s oil markets into a glut.


Fearful of having their economies held hostage by a group of absolute monarchies, the big oil consumers began an energy transition away from petroleum that was largely successful. 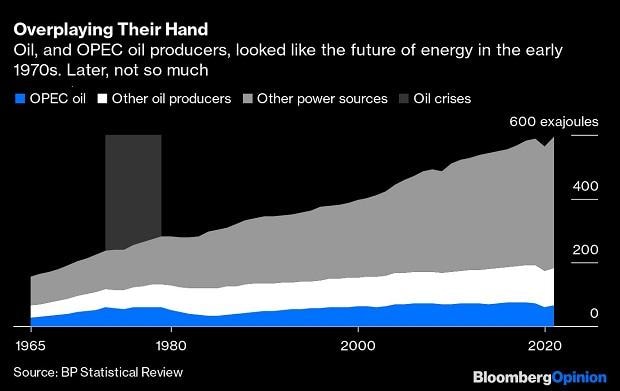 In the UK, a nationalized coal industry on the verge of bankruptcy was revived in a “great coal rush” as new power stations were built, collieries restructured and reserves opened up. In the North Sea, offshore oil platforms sprouted to take advantage of Europe’s own crude reserves. A surge in US solid fuel demand caused a boom in the Powder River Basin, a corner of the Rocky Mountains which since the 1980s has provided more than 40% of America’s coal.


France announced plans to switch its entire generation fleet to nuclear power, and tried to sell the technology to Iran and Iraq to secure crude supplies. Across the world, nuclear generation increased fivefold between 1973 and 1983, before doubling again by 1990. In Brazil, the government introduced ethanol-based road fuel and built the Itaipu and Tucurui dams, to this day some of the largest power stations ever constructed.


One reason that so many coal and nuclear generators in Europe and North America have shut down over the past decade is precisely that so many of them were built in the wake of the first energy crises, and have thus been coming to the end of a power plant’s standard 30-40 year operating life.


Even efficiency, now remembered mostly as a punchline after a 1977 speech by President Jimmy Carter in which he likened the energy crisis to a war and called for measures that were later seen as unpalatably austere, played its part. US energy demand in 2000 ended up about 20% below the lowest estimate of one 1972 long-term study by the Rand Corp. — and while that analysis reckoned such restraint would only be possible with a 60% increase in electricity prices, in fact they fell by about 10% over the period. The explanation for this shift lies is one of the oldest lessons of commodity markets — substitution. Whenever a product becomes too expensive or unreliable, consumers will switch to something that suits their needs better. The advantage of oil in 1972 was its low price and ready availability. By 1980, it was about eight times as costly, and far less trustworthy. For decades since, the cornerstone of the major oil exporters’ policy has been a repudiation of the events of the 1970s, to assure importers that the flow of hydrocarbons would be uninterrupted.


The events of the past year have been a dramatic un-learning of that lesson. With President Vladimir Putin’s decision to wield gas as a weapon following Russia’s invasion of Ukraine, it’s gas that will be the biggest loser. Consumption will fall this year by about 20 billion cubic meters, the International Energy Agency reported in July. That’s the worst decline in history after the global financial crisis in 2009 and the Covid-19 pandemic in 2020.


Medium-term consumption growth, forecast at 1.6% in 2019 and 1.4% last year, will instead run at just 0.8% through to 2025, the IEA said. “Today’s record prices and supply disruptions are damaging the reputation of natural gas as a reliable and affordable energy source,” it wrote, “casting uncertainty on its prospects.” That’s particularly the case in developing countries, which had been seen as one of the biggest sources of future gas demand. A Sept. 15 meeting between Putin and Chinese President Xi Jinping was notable for the lack of any announcement on the planned Power of Siberia 2 gas pipeline. That connection could provide an alternative export route if Russia finds itself cut off from Europe — but it also risks making Beijing as dependent on Moscow as Europe is right now, helping to explain China’s apparent wariness about the project. Total global gas consumption in 2025 will be about 127 bcm below the IEA’s 2020 forecast, according to the agency, a volume equivalent to all the LNG exported annually from the Middle East.


Oil’s prospects aren’t quite as bad, with the IEA’s consumption forecasts little changed so far this year, despite being well below their expectations as recently as 2020. For gasoline, though — in rich countries the biggest end-use of crude, accounting for about a quarter of global consumption — demand has already peaked, and will never return.


If you look at exploration for new petroleum fields as a proxy for investors’ expectations of future demand, things look grim indeed. The acreage awarded through August this year fell to a 20-year low of 320,000 square kilometers (124,000 square miles), according to Rystad Energy, a consultancy. Upstream investment in developing new fields is still about 20% below its pre-Covid levels this year, with only the Middle East’s state oil companies spending more than previously.


It’s tempting to view this as a simple victory for climate and the energy transition — but in an era when geopolitics are dominating the energy conversation, it’s the dirtiest fossil fuel that’s bucking the trend. While coal consumption is unlikely ever to return to its 2013 peak demand levels, consumption is running ahead of previous forecasts as the high price of gas causes utilities in Asia and Europe to delay plans to switch away from solid fuel. Decent coal reserves are found in a far more diverse array of countries than is the case for oil and gas, with China, India and Indonesia alone accounting for more than two-thirds of global production. With energy security at a premium, that risks delaying the necessary shutdown of the world’s coal-fired power.


Even there, though, the forces of substitution favor renewables, which are now cheaper almost everywhere. Three-quarters of India’s new power generation capacity installed in 2021 was renewable; through August this year, the equivalent figure was 93%. Coal-fired generation in China will drop by 1% this year, the first decline since 2015, the IEA argues. Everywhere renewables, and to a lesser extent nuclear, are making up the majority of new demand. Power sector emissions will fall by 5% in the Americas and 8% in Europe next year as coal’s brief demand blip fades. The REPowerEU plan to reduce Europe’s dependence on Russian gas will quadruple solar capacity in the European Union. In the North Sea, whose oil platforms helped reverse the impact of the 1970s energy crises, European governments in May pledged to build 65 gigawatts of offshore wind by 2030 — equivalent to roughly 1.5 times global offshore capacity last year.


The US Inflation Reduction Act passed in July is projected to reduce that country’s emissions by 40% below 2005’s levels by the end of the decade. The solar panel industry, for one, is already building a supply chain that would be sufficient to put that sector on track to net zero.


While the world was distracted by the Covid-19 pandemic, our consumption of gasoline peaked and entered terminal decline. While we’ve been focused on war and surging fossil-fuel prices, it’s possible that emissions from the world’s electricity grids peaked, too.


The past year’s attempts to prove the world’s dependence on fossil fuels have only accelerated our shift away from them. The energy transition isn’t dead. Instead, it’s been supercharged.