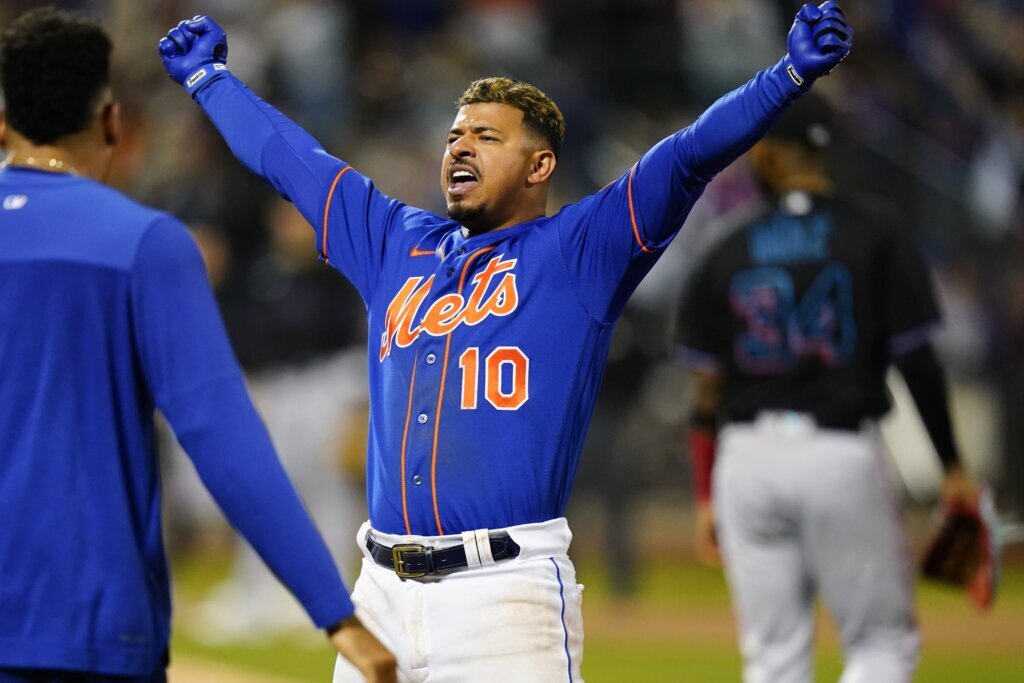 NEW YORK (AP) — Eduardo Escobar homered and drove in five late runs — including the game-winning single in the 10th inning — to rally the New York Mets past the Miami Marlins 5-4 on Wednesday night and back into sole possession of first place in the NL East.

By overcoming a four-run deficit, the Mets moved a game ahead of the Braves heading into a three-game showdown between the teams in Atlanta this weekend. The defending World Series champions lost 3-2 in 10 innings at last-place Washington, one night after pulling even with the Mets.

Of course, Hurricane Ian could affect the schedule in Atlanta, where the teams are set to square off Friday night following a mutual off day. Both clubs have six games remaining in the only division race not decided.

One win at Truist Park would give the Mets the season-series tiebreaker over Atlanta.

After this weekend, New York finishes the regular season with three home games against Washington, while the Braves play at Miami.

Escobar hit a two-run homer in the seventh and tied it on a two-run single with two outs in the eighth. Both those big hits came right-handed, but the switch-hitter was batting from the left side when his RBI single off Dylan Floro (1-3) in the 10th scored automatic runner Francisco Lindor from second.

Drew Smith (3-3) struck out two in a hitless inning for the win.

Miami starter Jesús Luzardo mowed down the Mets for six innings, striking out Pete Alonso three times and taking a two-hit shutout into the seventh.

But then Jeff McNeil led off with a single and Escobar chased the left-hander with a drive to left field that gave him his fifth career 20-homer season.

Marlins reliever Tanner Scott, pitching for the first time since Sept. 16, walked three batters in the eighth to load the bases and Escobar grounded a two-run single off Richard Bleier through an open right side with two outs to tie it 4-all.

Alonso raised both arms after sliding headfirst across home plate, and a fired-up Escobar pumped his fist and pounded his chest in excitement as he shouted toward the Mets’ dugout.

Bryan De La Cruz hit a two-run homer off starter Taijuan Walker and finished a triple short of the cycle for the fourth-place Marlins. JJ Bleday had a sacrifice fly, and Brian Anderson added an RBI double.

Mets manager Buck Showalter sounded a little annoyed that no schedule adjustments had been made yet to the series in Atlanta to help the teams get all three games in this weekend or avoid a potential makeup doubleheader.

“All that’s up to Atlanta. We don’t have much input at all. I mean, can’t you tell?” Showalter said. “It’s not our home game.”

Showalter said the Mets were planning to bring a taxi squad to Atlanta as insurance — in case rough weather makes it difficult to get reinforcements there for an injured player, for example.

Marlins: SS Miguel Rojas sat out after leaving Tuesday night’s game in the seventh inning when tendinitis flared up in his right wrist and affected his throwing hand and forearm. … LHP Steven Okert (tender biceps) threw a bullpen.

Mets: There’s still no timetable for the return of All-Star RF Starling Marte, sidelined since Sept. 7 with a partially broken middle finger on his right (throwing) hand. He received an injection and remains in a splint but is still feeling some discomfort. “I know it’s frustrating for him,” Showalter said. “He just needs to get to a point where he can grip a ball and grip a bat. Not there yet.”