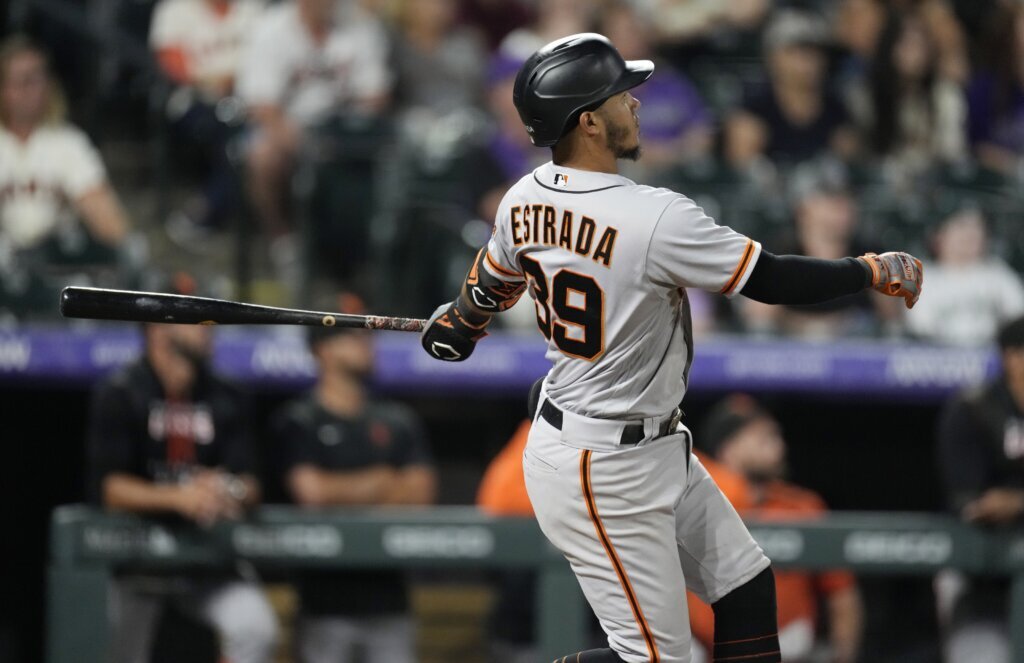 DENVER (AP) — Thairo Estrada hit a go-ahead, three-run homer in the 10th inning after igniting a tying rally in…

DENVER (AP) — Thairo Estrada hit a go-ahead, three-run homer in the 10th inning after igniting a tying rally in the ninth, and the San Francisco Giants came back to beat the Colorado Rockies 10-7 on Monday night.

Mike Yastrzemski homered and Wilmer Flores had three hits and two RBIs for the Giants, who snapped a three-game losing streak and overcame four errors that led to two unearned runs.

Michael Toglia had three hits for the Rockies, including a pair of run-scoring triples. C.J. Cron and Charlie Blackmon also had three hits apiece for Colorado.

Gavin Hollowell (0-1), making his major league debut, struck out the first two batters he faced in the 10th. But he walked LaMonte Wade Jr., giving the Giants runners at first and second, including the automatic runner. Estrada worked the count full before connecting for his 14th home run, a line shot that reached the left field bleachers.

Camilo Doval (6-6) pitched a scoreless ninth for the win and Scott Alexander got three outs for his second save.

Trailing 6-2 going into the fifth, the Giants rallied for three runs, getting the first two on Joc Pederson’s sacrifice fly and Brandon Crawford’s two-out RBI single. David Villar then singled and Chad Smith relieved Chad Kuhl. Yastrzemski, who hit a solo homer in the fourth, greeted Smith with an RBI single before the Rockies ended the inning by throwing out Villar at the plate on a delayed double-steal attempt.

The Rockies added a run in the sixth on Connor Joe’s RBI double, but San Francisco fought back to tie it with a two-run ninth. Estrada had a leadoff double against Justin Lawrence and, one out later, Flores singled him home. Crawford flied out before Villar evened the score with an RBI double.

San Francisco starter Jakob Junis went 4 1/3 innings and allowed six runs on 12 hits, including RBI triples in successive at-bats by Toglia, who broke out of an 0-for-14 skid.

Giants: LHP Carlos Rodón had his scheduled Tuesday start pushed back to Friday in Arizona. Manager Gabe Kapler said the team wanted to give Rodón some extra time between starts to allow a blister and split fingernail on his pitching hand to calm down a bit. Rodón has been dealing with the problem for much of the season. Kapler did not immediately announce a replacement. “We’ll figure it out,” he said. … The Giants reinstated OF Austin Slater (left hand sprain) from the 10-day injured list and optioned OF Heliot Ramos to Triple-A Sacramento

Rockies: 2B Brendan Rodgers remains day-to-day with a left hamstring strain. The Rockies are hopeful Rodgers will be able to return soon, though the team said he will undergo an MRI. Rodgers left Sunday’s game at the Chicago Cubs early because of soreness in the hamstring.