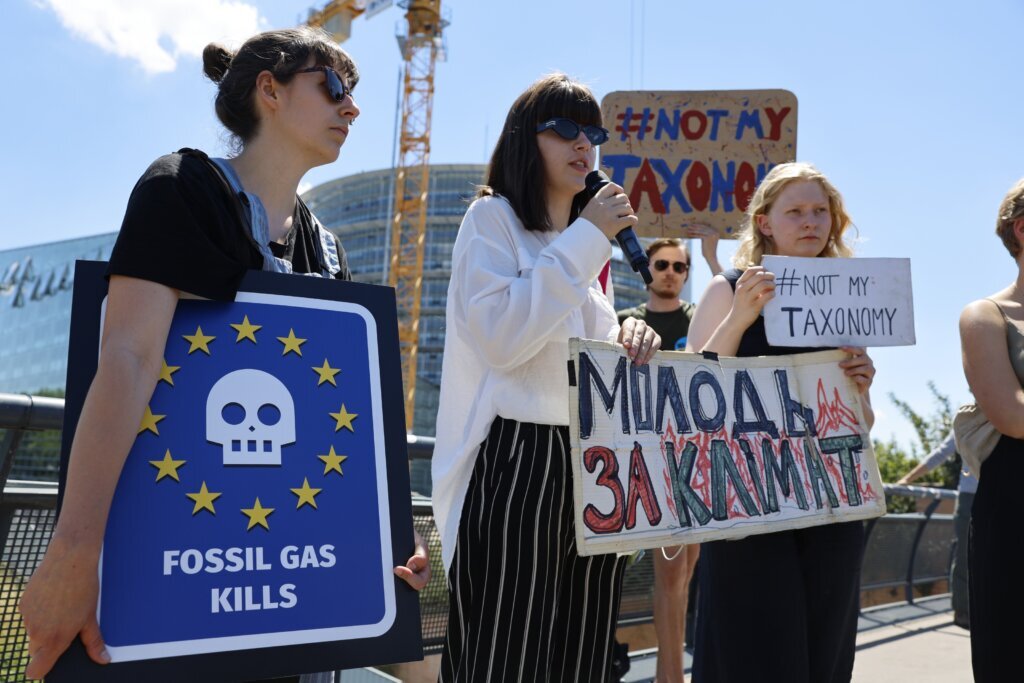 BRUSSELS (AP) — European lawmakers will decide Wednesday whether fossil gas and nuclear energies can be included in the EU’s list of sustainable activities, in a cliff-edge vote targeting climate change but heavily influenced by the war in Ukraine.

The executive Commission of the 27-nation bloc wants nuclear energy and natural gas in its green finance plans for building a climate-friendly future, believing that will speed the phasing-out of more polluting fuels like oil and coal.

But this has divided the 27 member countries and even the parliament’s political groups, while environmentalists claim it amounts to “greenwashing.”

Protests that had started on Tuesday continued Wednesday outside the EU legislature in Strasbourg, France, as lawmakers debated the issue. A vote was planned around midday (1000GMT). Two parliamentary committees objected to the measure last month, but legislators said Wednesday’s vote was too close to call.

If an absolute majority — or 353 — of the EU lawmakers vote against the Commission’s regulation on the so-called taxonomy, it will need to be withdrawn or amended.

The green labeling system from the European Commission, the EU’s executive arm, defines what qualifies as an investment in sustainable energy. Under certain conditions, gas and nuclear energy could be part of the mix, making it easier for private investors to inject money into both.

One argument for rejecting the proposal is that it would boost Russian gas sales at a time when it is invading neighboring Ukraine, but the Commission said it had received a letter from the Ukrainian government backing its stance.

European Commissioner Mairead McGuinness quoted from the letter from Ukraine’s energy minister Tuesday: “I strongly believe that the inclusion of gas and nuclear in the taxonomy is an important element of the energy security in Europe, especially with a view to replacing Russian gas.”

“I don’t think we should second-guess this letter,” McGuinness said.

The commission believes that including nuclear and gas as transitional energy sources that would be phased out later does not amount to a free pass, as conditions would still have to be met.

With the EU aiming to reach climate neutrality by 2050 and to cut greenhouse gas emissions by at least 55% by 2030, it says the classification system is crucial to direct investments into sustainable energy. It estimates that about 350 billion euros of investment per year will be needed to meet the 2030 targets.

The 27-nation bloc is trying to wean itself off its dependency on Russian fossil fuels, and member countries have already agreed to ban 90% of Russian oil by year-end. Before the war in Ukraine, it relied on Russia for 25% of its oil and 40% of its natural gas.