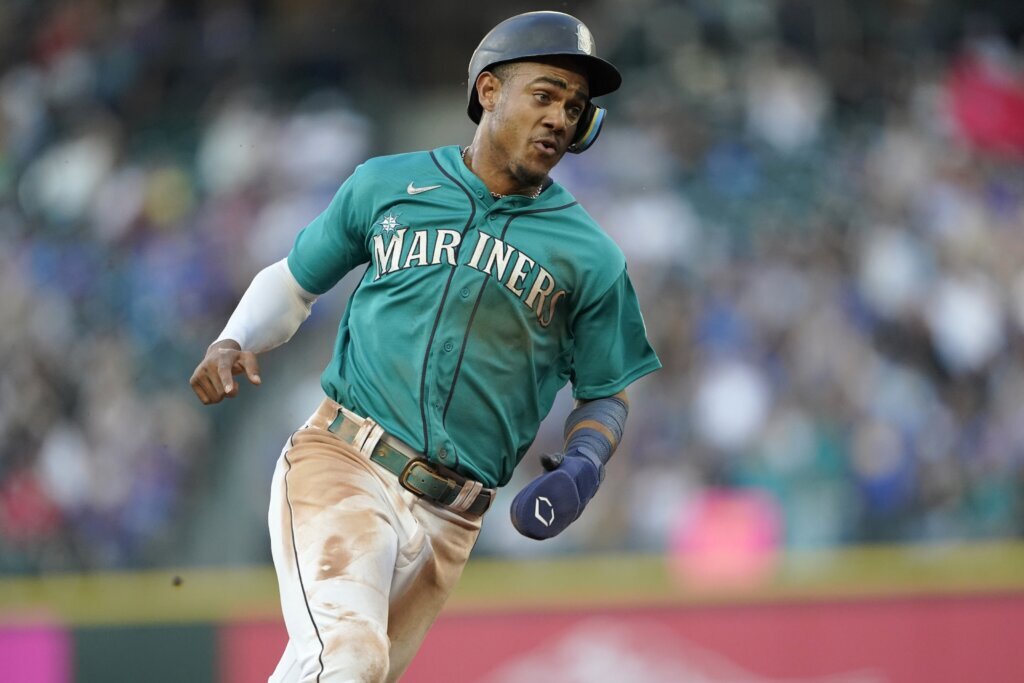 SEATTLE (AP) — Eugenio Suárez hit a three-run homer off Sergio Romo in the 11th inning, and the Seattle Mariners…

SEATTLE (AP) — Eugenio Suárez hit a three-run homer off Sergio Romo in the 11th inning, and the Seattle Mariners beat the Toronto Blue Jays 5-2 on Friday night for their season-best sixth straight victory.

Romo threw just four pitches in his brief outing. The veteran was designated for assignment by Seattle late last month before signing with the Blue Jays.

Former Toronto reliever Ryan Borucki (1-0) picked up the win, pitching the 10th and 11th innings without allowing a run. Borucki got out of the 10th thanks to Matt Chapman lining into a double play. In the 11th, Chapman reached third with one out, but Borucki struck out Cavan Biggio and got a fly out from George Springer.

Seattle tried to win it in the 10th on J.P. Crawford’s line drive single to left field. Third base coach Manny Acta made the aggressive decision to send Abraham Toro from second, but Lordes Gurriel Jr’s. throw was on target and Toro was easily tagged out.

Seattle starter George Kirby lasted 4 1/3 innings and allowed 10 hits, but the Blue Jays could manage only two runs despite the constant traffic on the bases. Toronto left the bases loaded in fourth inning and left runners at second and third in the fifth.

Toronto ended up with a pair of All-Star Game starters after Guerrero and catcher Alejandro Kirk won the final vote to be starters at their positions for the July 18 game in Los Angeles.

It will be the second All-Star Game appearance for Guerrero, but the first for Kirk, who entered Friday hitting .312 with 10 homers and 33 RBIs.

Guerrero beat out Seattle Ty France for the nod at first base.

Toronto activated RHP Yimi García from the 15-day injured list and optioned RHP Casey Lawrence to Triple-A Buffalo. García had been out since June 22 with a back strain.

Blue Jays: Toronto has not named a starter for Sunday’s series finale, with manager Charlie Montoyo saying he wanted to see how the next two days went before deciding on a starter. He also said there remains a chance the RHP Kevin Gausman (ankle) will be healthy enough to make the start. Gausman was scheduled to start Thursday but was scratched after getting hit on his ankle in his last start.

Mariners: RHP Ken Giles left the game with an undisclosed injury with one out in the eighth inning and in the middle of an at-bat. Giles got the first out of the inning, but then called for a trainer after falling behind 3-1 to Santiago Espinal.

Mariners: LHP Robbie Ray (7-6, 3.62) get to face his former team for the first time. Ray did not travel with the Mariners to Toronto when the teams met in May due to border restrictions related to the COVID-19 vaccine. Ray is 4-1 with a 0.80 ERA and 40 strikeouts in 33 2/3 innings over his past five starts.