FABIO CAPELLO was “proud” to sell Ronaldo because the Brazil legend loved “parties and women”.

The ex-England chief even found it “funny” when AC Milan signed the striker from him at Real Madrid in 2007 – as he had WARNED the Italian giants about Ronaldo skipping training.

The Italian, 76, was known as a disciplinarian, even clamping down on family visits for the Three Lions’ ill-fated 2010 World Cup.

So it could hardly have been a bigger clasher of off-field styles when he managed Ronaldo in his second spell in charge of Real.

The two-time Ballon d’Or winner was in the last of his five years at the Bernabeu when matters with Capello came to a head.

Ronaldo, 30 at the time had previously played for Barcelona and Inter Milan, as well as winning the World Cup in 1994 and 2002. 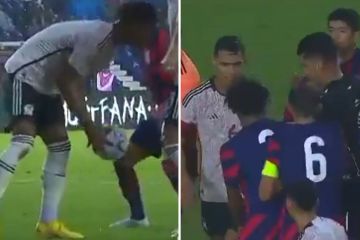 But Capello explained the strains of life with the Rio de Janeiro icon.

He told A Bola: “Being a Real Madrid coach is a huge responsibility. In my second spell, the decision to send Ronaldo away and sign Cassano helped to create a winning spirit in the team.

‘I remember Silvio Berlusconi [former AC Milan owner] calling me to ask how Ronaldo was doing.

“I told him that he didn’t even train himself and that he was very fond of parties and women, so hiring him would be a mistake.

“The next day I saw the headline in the newspaper and it was Ronaldo in Milan. It was very funny.’

He then finished his career back home in Brazil with Corinthians from 2009-11.