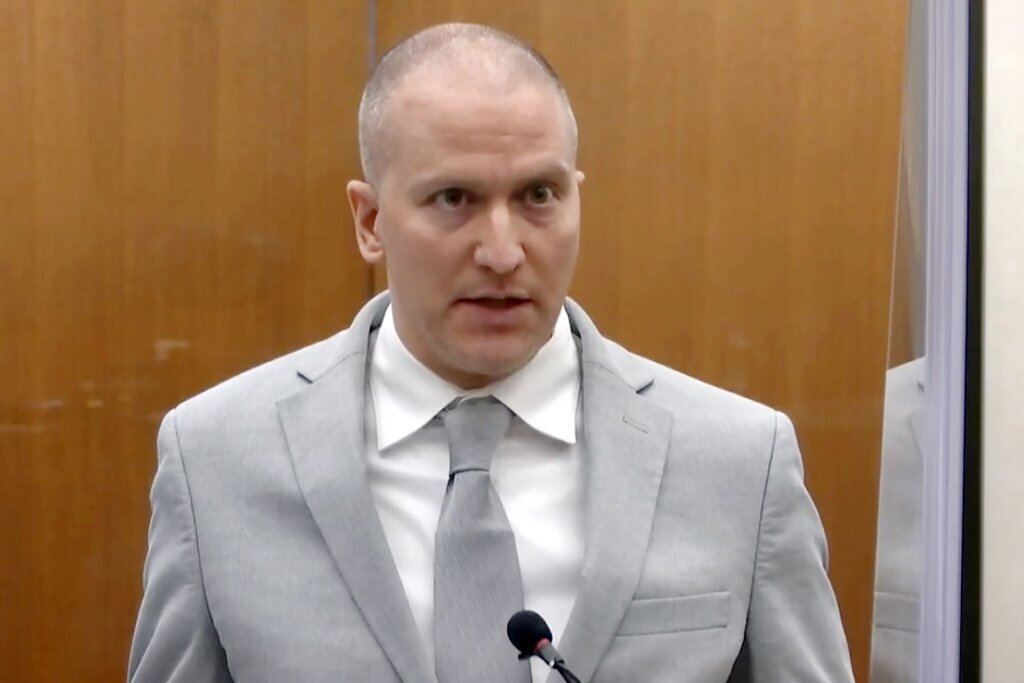 MINNEAPOLIS (AP) — Former Minneapolis police officer Derek Chauvin is about to swap solitary confinement at Minnesota’s only maximum security prison for an unknown future at a federal prison where, despite his national notoriety for killing George Floyd, he’ll probably be safer.

Chauvin will be sentenced Thursday in U.S. District Court in St. Paul after pleading guilty in December to federal civil rights charges. He’s already serving 22 1/2 years for his conviction in state court on murder and manslaughter charges. His plea deal on the federal charges calls for a sentence of 20 to 25 years, and for serving the sentences concurrently in federal prison.

Inmates qualify for parole earlier in the Minnesota prison system than they do in the federal system, so the agreement means Chauvin will spend at least a couple more years behind bars than he would have for the state murder conviction alone. But it avoids the life sentence he faced on the federal charges, and gives him the potential for a safer environment with a bit more freedom.

Chauvin, who is white, killed Floyd by pinning the unarmed Black man to the pavement with his knee for 9 1/2 minutes, despite the Black man’s fading pleas of “I can’t breathe.” Floyd’s killing in May of 2020 sparked protests worldwide and forced a national reckoning over police brutality and racism.

WHERE IS HE NOW?

For his own safety, Chauvin, 46, has been held since his conviction in “administrative segregation” at the state’s maximum security prison at Oak Park Heights. He’s been largely confined to a 10-by-10-foot room, which he’s been allowed to leave for an average of one hour a day for exercise.

His attorney, Eric Nelson, wrote in a request for a 20-year sentence late last month that Chauvin still “spends much of his time in solitary confinement, largely for his own protection.”

Nelson speculated that Chauvin may never be placed in a prison’s general population because of the risks of him becoming a target due to being a former officer and the “intense publicity surrounding his case.” But outside experts say he’ll probably mix with other inmates at some point.

The Bureau of Prisons determines where to send federal prisoners. Judges can make recommendations. But the decision about an inmate’s final placement and the appropriate security level is up to the bureau, which runs prisons across the country ranging from low-security camps to to one “supermax” for the most dangerous offenders.

Bureau spokesman Scott Taylor declined to comment on Chauvin’s case specifically. But he said “a number of factors” go into placement decisions.

“Some of the factors include the level of security and supervision the inmate requires, any medical or programming needs, separation and security measures to ensure the inmate’s protection, and other considerations including proximity to an individual’s release residence,” Taylor said.

Nelson wrote that Chauvin “has been preliminarily diagnosed with heart damage and is, therefore, like many ex-law enforcement officers, at greater risk of dying at a young age.”

But that’s just one factor the bureau could consider. Another is the length of his sentence. Experts speculate that he’s likely to start in at least a medium-security facility.

“I’ve been in several federal prisons, including prison camps, and they are not country clubs,” said Mark Osler, a professor at University of St. Thomas School of Law. “But I would see it as every unlikely that he would initially be imprisoned at a camp or a ‘low’ classification prison. He’s much more likely to end up at a ‘high’ classification or a ‘medium.’”

If Chauvin were in the general population of a Minnesota state prison, he’d be at risk of running into inmates he had arrested or investigated when he was a Minneapolis officer, said Rachel Moran, another law professor at St. Thomas. While he can’t totally escape his notoriety in a federal prison elsewhere, she said, he’s unlikely to encounter inmates with such a direct, personal grudge.

“It’s dangerous to be an officer in any prison,” former U.S. Attorney Tom Heffelfinger said. “It’s even more dangerous in state prison because of the nature of the inmate population. There are gangs, for example. And police officers just don’t do well there. Those risks are reduced in a federal prison.”

Assuming the bureau decides Chauvin is safe enough in the general population, he’ll have more chances to move about, to work and to participate in programming. Those opportunities would vary with the security level and the individual facility.

Former South Carolina police Officer Michael Slager is serving a 20-year sentence for killing Walter Scott, an unarmed Black man who ran from a traffic stop. Slager, who is white, pleaded guilty to a federal civil rights charge for shooting Scott in the back five times in 2015 after stopping him for a broken brake light in an incident that, like Floyd’s death, was captured on widely seen bystander video.

Slager’s state murder charge was dropped as part of the federal plea deal. His lawyers said at the time that Slager wanted to be in federal custody where he felt he would be safer than in state prison. Slager is serving his time in a low-security federal prison in Colorado.

Find AP’s full coverage of the death of George Floyd at: https://apnews.com/hub/death-of-george-floyd