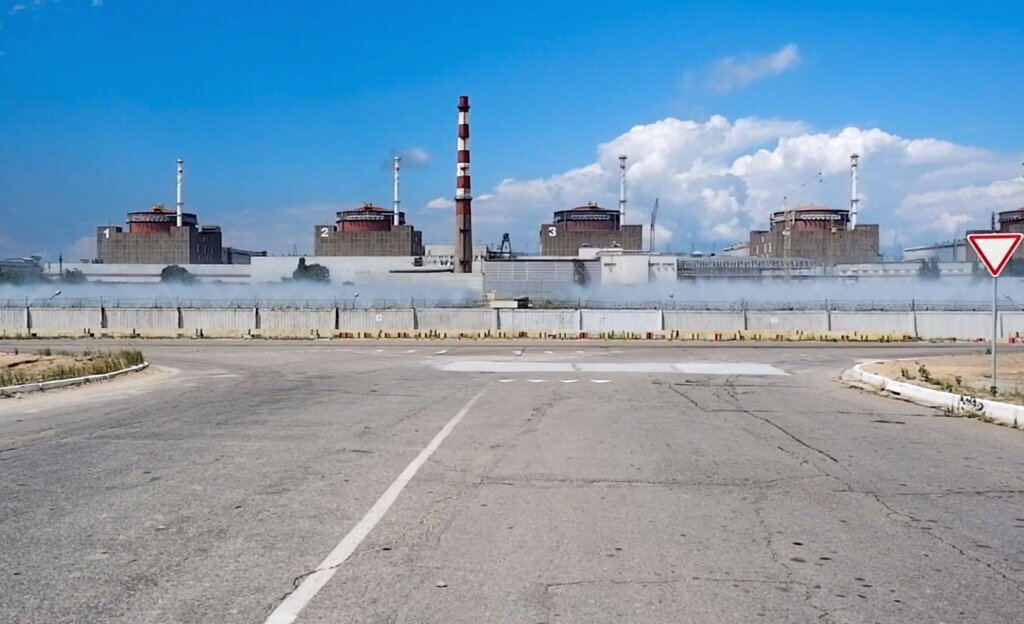 Russia and Ukraine have accused each other of shelling Europe’s largest nuclear power plant, stoking international fears of a catastrophe…

Russia and Ukraine have accused each other of shelling Europe’s largest nuclear power plant, stoking international fears of a catastrophe on the continent. A look at the plant and the situation around it:

The Zaporizhzhia plant is in southern Ukraine, near the town of Enerhodar on the banks of the Dnieper River. It is one of the 10 biggest nuclear plants in the world.

Built during the Soviet era, it has six reactors with a total capacity of 5,700 megawatts. Three of the reactors are in operation.

Before the war, the plant accounted for about half of the electricity generated by nuclear power in Ukraine. The country has 15 reactors at four active plants, and also is home to the decommissioned Chernobyl plant, the site of the 1986 nuclear disaster.

During the fighting in early March, Russian and Ukrainian forces exchanged fire near the plant. The skirmishes resulted in a fire at its training complex.

The Russians have left the Ukrainian staff in place to keep the plant operating, and it has continued to supply electricity to government-controlled parts of Ukraine.

The fighting around the plant has fueled fears of a disaster like the one at Chernobyl, where a reactor exploded and spewed deadly radiation, contaminating a vast area in the world’s worst nuclear accident.

Russian forces occupied the heavily contaminated Chernobyl site soon after the invasion but handed control back to the Ukrainians after withdrawing from the area at the end of March.

Ukraine has accused Russia of storing troops and weapons at the plant and using its grounds to launch strikes against Ukrainian-controlled territory across the Dnieper. Ukrainian officials and military analysts say Moscow’s forces have cynically employed the plant as a shield, knowing that the Ukrainians would be hesitant to fire back.

Russia has denied the accusations and, in turn, accused Ukrainian forces of repeatedly shelling the plant.

A series of attacks on the plant over the past few days has damaged some of its auxiliary equipment but not its reactors, and there has been no threat of a radiation leak, according to Russian authorities.

The Russian Defense Ministry said Ukrainian shelling of the plant on Sunday caused a power surge and smoke, triggering an emergency shutdown and forcing the staff to lower output from two of the reactors.

Kremlin spokesman Dmitry Peskov warned that the Ukrainian shelling of the plant is “fraught with catastrophic consequences for vast territories, for the entire Europe,” while the Russian Foreign Ministry has accused Ukraine of “taking the entire Europe hostage.”

Ukrainian officials countered by accusing Russian forces of planting explosives at the plant in preparation for an expected Ukrainian counteroffensive in the region. They also have accused Russia of launching attacks from the plant using Ukrainian workers there as human shields and shelling the place themselves.

Ukrainian President Volodymyr Zelenskyy said that the Russian shelling and mining of the plant amount to “nuclear blackmail.”

Zaporizhzhia Gov. Oleksandr Starukh said that while the reactors are well protected by their thick concrete containment domes, it is impossible to guarantee their safe operation because of the Russian troops’ presence. He noted, too, that the storage sites at the plant for spent nuclear fuel are not as well protected as the reactors.

Mark Wenman, a nuclear expert at London’s Imperial College, said the plant’s reactors are designed “to protect against natural disasters and or man-made incidents such as aircraft crashes or reactor accidents.”

“I do not believe there would be a high probability of a breach of the containment building even if it was accidentally struck by an explosive shell, and even less likely the reactor itself could be damaged by such,” he said. He added that the spent fuel is also stored in “very robust steel and concrete containers that are designed to withstand very high-energy impacts.”

Rafael Mariano Grossi, director-general of the United Nations’ nuclear watchdog, the International Atomic Energy Agency, told The Associated Press last week that the situation surrounding the Zaporizhzhia plant “is completely out of control,” and he issued an urgent plea to Russia and Ukraine to allow experts to visit the complex to stabilize matters and avoid a nuclear accident.

“Every principle of nuclear safety has been violated” at the plant, Grossi said. “What is at stake is extremely serious and extremely grave and dangerous.”

Grossi said the supply chain of equipment and spare parts has been interrupted, “so we are not sure the plant is getting all it needs.” He noted that the IAEA also needs to perform highly important inspections to ensure that nuclear material is being safeguarded.

Grossi added that there have been instances of friction and reports of violence between the Russians and the Ukrainian staff.

“When you put this together, you have a catalog of things that should never be happening in any nuclear facility,” Grossi said.

The IAEA has sought in vain to send an inspection team to the plant for months.

Moscow has said it welcomes a visit to the plant by the IAEA, but it is unclear whether it is ready to actually help arrange such a trip.

Ukraine previously opposed Grossi’s visit to the site for as long as it remains under Moscow’s control, demanding the Russian military withdraw.

This week, however, Ukrainian officials appeared to warm up to such a trip, with Ukraine’s ombudsman, Dmytro Lubinets, urging the U.N. and IAEA to send a delegation to help “completely demilitarize the territory” and provide security guarantees to plant employees.