EXPLAINER: What to know on Congress’ bid to bar rail strike 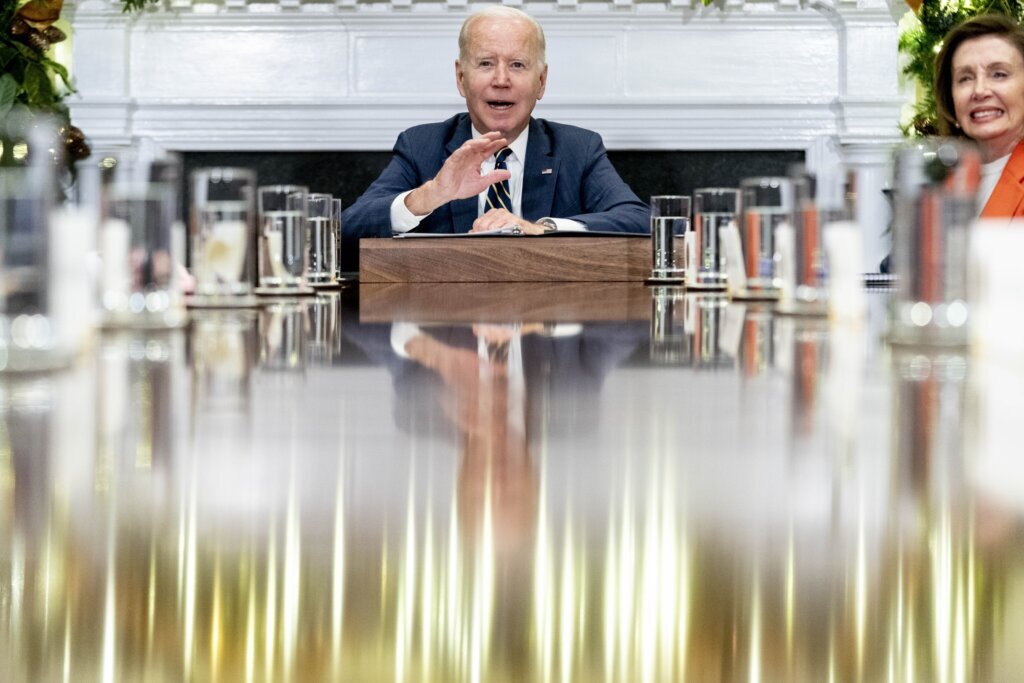 WASHINGTON (AP) — President Joe Biden is asking Congress to intervene to avert a potentially crippling freight rail strike before Christmas and House Speaker Nancy Pelosi is calling a vote this week to do so, even if it means handing a defeat to Democratic allies in the labor movement.

The legislation urged by Biden and being voted on Wednesday by the House would impose a compromise labor agreement brokered by his administration that was ultimately voted down by four of the 12 unions that represent about 115,000 workers at the freight railroads.

A look at Congress’ options to intervene, the potential impact on consumers, and what happens next:

WHY DID BIDEN ASK CONGRESS TO ACT NOW?

In urging Congress to impose the deal that union leaders had agreed to in September, Biden pushed an aggressive option that would immediately resolve an impasse between freight railroads and the unions over paid sick leave that threatened a rail stoppage starting Dec. 9.

The other options included extending a cooling-off period to allow both sides to continue negotiating or forcing the parties to enter arbitration. Biden also could have urged Congress to impose a less generous proposal for workers that was issued by a presidential board of arbitrators in August. Or he could have proposed adding the sick time or other benefits unions have been asking for, but sweetening the deal for railroad workers at this point would have been a harder sell with Republicans.

The main reason for Biden to act now is that nearly every industry would be hurt by a rail shutdown and many commuters would be stranded as well. Railroads haul about 40% of the nation’s freight, and the railroads estimated that a rail strike would cost the economy $2 billion a day . Also, rail would begin to stop taking shipments of hazardous materials and perishable goods up to a week before next Friday’s strike deadline. That’s why business groups in particular were urging Biden and Congress to act this week.

Biden, who described himself as a “proud, pro-labor president” in calling for congressional action, said intervention was needed now.

“It’s not an easy call, but I think we have to do it. The economy’s at risk,” he said Tuesday.

WHAT POWER DOES CONGRESS HAVE TO INTERVENE?

Congress can step in to resolve disputes between labor unions and railroads under the 1926 Railway Labor Act, as part of its power under the Constitution to regulate commerce. That law was written to prevent disruptions in interstate commerce.

Congress has previously intervened 18 times in such disputes after the process has proceeded without success to a Presidential Emergency Board, which issues recommendations that the parties may choose to reject.

The last time Congress ended a rail strike was in 1992, sending the case to arbitration. Biden was one of only six senators to vote against that legislation, citing unfavorable terms for workers. President George H.W. Bush signed the legislation into law to end a two-day strike that had begun forcing layoffs at coal mines and auto assembly plants and threatened a broader stoppage of Amtrak passenger service.

If Congress acts in this go-around, it will end talks between the railroads and four rail unions that rejected the deal Biden helped broker before the original strike deadline in September. Eight other unions have approved their five-year deals with the railroads and are in the process of getting back pay for their workers for the 24% raises that are retroactive to 2020.

WHAT IS THE MAIN STICKING POINT BETWEEN UNIONS AND FREIGHT RAIL?

The main sticking points in the negotiations have been related to quality of life concerns. Workers have complained about the demanding schedules in the industry that make it hard for some of them ever to take a day off, and the rail unions have been pushing for the railroads to add paid sick time for workers. Railroads have refused to consider adding sick time because they don’t want to spend more on these deals than what they have already offered, and the railroads say the unions have agreed over the decades to forgo paid sick time in favor of higher wages and strong short-term disability benefits.

The demanding schedules piece is the biggest issue for engineers and conductors because they’re on call 24-7. Some of the other unions have more regular schedules already. But all the unions that rejected their deals have been pushing to add sick time on top of the September deals.

Workers also say their jobs have become significantly more demanding because the railroads have eliminated nearly one-third of their jobs over the past six years as they overhauled their operations.

WHAT OPTIONS IS CONGRESS CONSIDERING AND WHEN WILL IT ACT?

Biden asked Congress to impose the compromise agreement that had been backed by business and labor leaders in September. The Democrat-controlled House is expected on Wednesday to pass the legislation, which leaves out provisions demanded by four rail unions to boost sick leave, and send it to the Senate.

Sen. Bernie Sanders, I-Vt., and some progressive Democrats in the House are criticizing the compromise agreement as falling short, but Biden has urged swift passage “without any modifications or delay.”

Some Republican lawmakers, meanwhile, had urged congressional intervention in September to impose recommendations of the presidential emergency board that were less favorable to workers. Under Biden’s brokered deal, for instance, engineers and conductors would get three unpaid days off a year to tend to medical appointments as long as they are scheduled 30 days in advance. The railroads also promised to negotiate further with those unions about improving the way regular days off are scheduled.

Jeff Davis, a senior fellow at the Eno Center for Transportation, said he expects Republicans will ultimately have to accept the House-passed measure by the time it reaches the Senate floor, likely early next week, to avoid delay and devastating consequences from a rail stoppage.

If there is no resolution by next Tuesday, Davis said, Amtrak would have to start shutting down long-distance passenger trains while freight rail would have to stop accepting hazmat shipments, including petroleum and liquified natural gas.

“There will be intense pressure to support the legislation,” he said.

Sen. Roger Wicker, the top Republican on the Commerce Committee, this week praised Biden’s call to Congress to act. Wicker said while no one side was fully happy with the compromise contract deal, “the responsible thing to do is avoid the strike.”

WHAT HAPPENS IF UNIONS ARE STILL UNHAPPY WITH THE FINAL TERMS?

Unions have little recourse if Congress moves forward in imposing the terms of the September deal. While dissatisfied with that deal, they also face potentially greater risks if negotiations were to extend without resolution into January, when the House comes under Republican control.

In his statement Monday, Biden noted that he’s been pushing for a separate federal paid leave policy for the past two years and will continue to do so, though the prospects remain uncertain.

On Tuesday, the Brotherhood of Maintenance of Way Employes Division union said it was “deeply disappointed by and disagrees” with Biden over the exclusion of paid sick leave.

“This cannot continue,” its statement said. “There must be a change.”