EXPLAINER: Why is China so angry over UN report on Xinjiang? 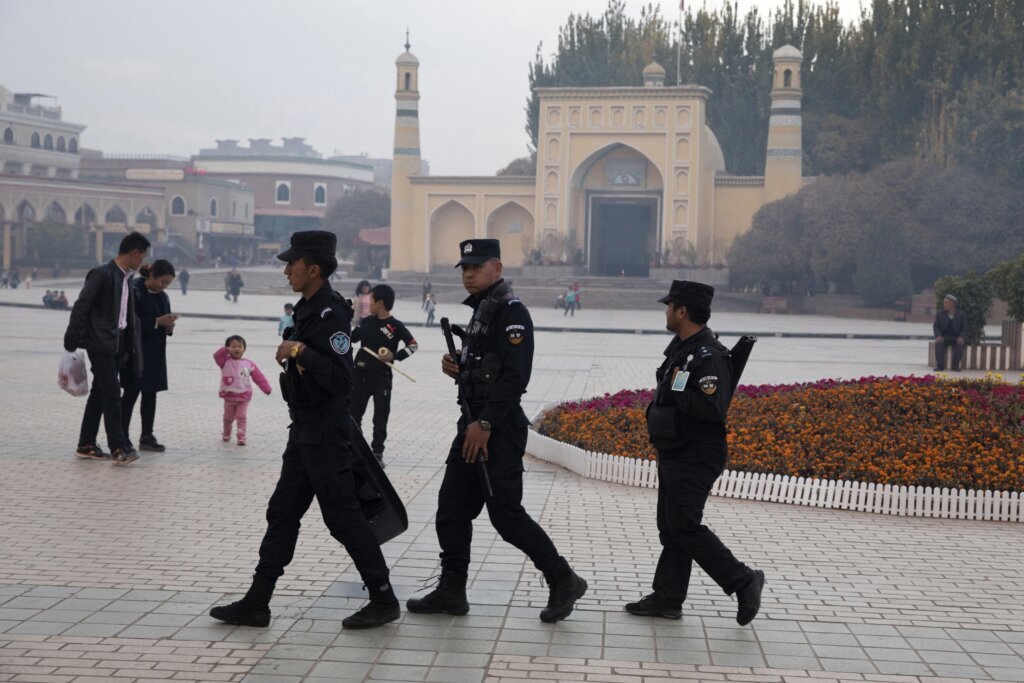 The report has been in the works for years and was released despite Chinese efforts to delay or block it, aware of how it could validate claims that more than 1 million ethnic minority members were forcibly sent to centers it says were for vocational training.

Those who were held, their relatives and monitoring groups describe them as prison-like reeducation centers where inmates were forced to denounce Islam and their traditional culture, while swearing fidelity to the ruling Communist Party.

The camps have been part of a widespread campaign of repression in Xinjiang, allegedly including involuntary sterilizations of women, forced labor, the demolition of mosques and other religious sites, the separation of Muslim children from their families and the harassment of minority members living abroad.

WHERE IS XINJIANG AND WHY IS IT IMPORTANT TO CHINA?

Xinjiang is a vast but sparsely populated region of mountains, forests and deserts in far northwestern China that borders Russia, Pakistan and several Central Asian nations. The ancient Silk Road ran through parts of it and various nationalities and Chinese empires controlled its cities and oases over the centuries, with the Communist Party taking complete control following its 1949 victory in the Chinese civil war.

The region contains a wealth of natural resources, including oil, gas and rare earth minerals, but perhaps its most important value is as a strategic buffer that extends China’s influence westward. While China and Russia have largely aligned their foreign policies in recent years, Xinjiang was on the front line of their Cold War rivalry and remains important as an assertion of Chinese influence in Moscow’s back yard.

WHAT PROMPTED CHINA’S CRACKDOWN ON MINORITIES?

Xinjiang’s Uyghurs, along with the closely related Kazakh and Kyrgyz, are predominantly Turkic Muslims who are culturally, religiously and linguistically distinct from China’s dominant Han ethnic group. Repression under Communist rule, particularly during the violent and xenophobic 1966-1976 Cultural Revolution, stirred deep animosity in Xinjiang toward the government, aggravated further by the migration of Han to the region and their domination of political and economic life.

Uyghurs established two short-lived independent governments in Xinjiang prior to the Communist Party’s seizure of power, and the desire for self-rule endured and was nurtured by resentment against heavy-handed Chinese rule. A protest movement began in the 1990s and remained at a relatively low level until simmering anger exploded in a 2009 riot in the regional capital of Urumqi that left an estimated 200 people dead. More violence followed within Xinjiang and as far away as Beijing, prompting Chinese leader Xi Jinping to order a massive crackdown starting in 2014.

WHAT IS THE BASIS FOR THE UN ACCUSATIONS?

With Xi’s blessing, Xinjiang’s hard-line leader, Chen Quanguo, who took office in 2016, began sending Uyghurs and others into a vast network of fortified camps without legal due process. It remains unclear what criteria were used to determine if a person needed to be sent for what the authorities called retraining or de-radicalization, but those who showed religious tendencies, the well-educated and anyone with foreign connections were especially susceptible.

Conditions in the camps have been described as overcrowded and unhygienic, with those inside forced to renounce their religion and culture and praise Xi and the Communist Party. Harsh punishments were meted out for those who refused to comply and the length of sentences were indeterminate. While China says it has closed the camps, many of those held have since received lengthy prison terms within a system that remains overwhelmingly opaque. The U.S. and others have labeled China’s policies against Xinjiang minorities as “genocide.”

WHAT HAS BEEN CHINA’S RESPONSE?

China has always denied targeting Uyghurs and others for their religion and culture, denouncing the accusations as a confection of lies by the West and saying its crackdown was aimed at quashing separatism, terrorism and religious extremism. It has said camp attendance was voluntary and no human rights were abused, although internal Chinese documents have frequently contradicted such claims.

Beijing has also cited carefully choreographed visits by journalists, diplomats and, most recently, U.N. High Commissioner for Human Rights Michelle Bachelet, as validating its claims. Some observers say the tide of criticism may have prompted Beijing to wind down the detentions earlier than planned to salvage its reputation among Muslim nations and in the developing world.

In a note accompanying the U.N. report, China’s diplomatic mission in Geneva registered its strong opposition to the findings, which it said ignore human rights achievements in Xinjiang and the damage caused by terrorism and extremism to the population.

“Based on the disinformation and lies fabricated by anti-China forces and out of presumption of guilt, the so-called ‘assessment’ distorts China’s laws, wantonly smears and slanders China, and interferes in China’s internal affairs,” the note said in part.

WHAT WILL BE THE OUTCOME FOR CHINA?

China’s authoritarian leaders have outwardly defied criticism of their policies in Xinjiang, but have been unsuccessful in thwarting international sanctions on officials who were involved and bans on cotton and other commodities from the region. The report’s release comes despite China’s growing influence within the U.N. and its pressure campaign against critics in the human rights community.

China has maintained its defiance and appears to believe its policies have been effective and should continue, despite any costs to its international reputation. On Thursday, its Foreign Ministry scoffed at the U.N. report, saying it was “orchestrated and produced by the U.S. and some Western forces and is completely illegal and void.”

“It is a patchwork of false information that serves as political tool for the U.S. and other Western countries to strategically use Xinjiang to contain China,” ministry spokesperson Wang Wenbin said.

Iran Takes Cryptocurrencies As Payment For Imports As Sanctions Intensify