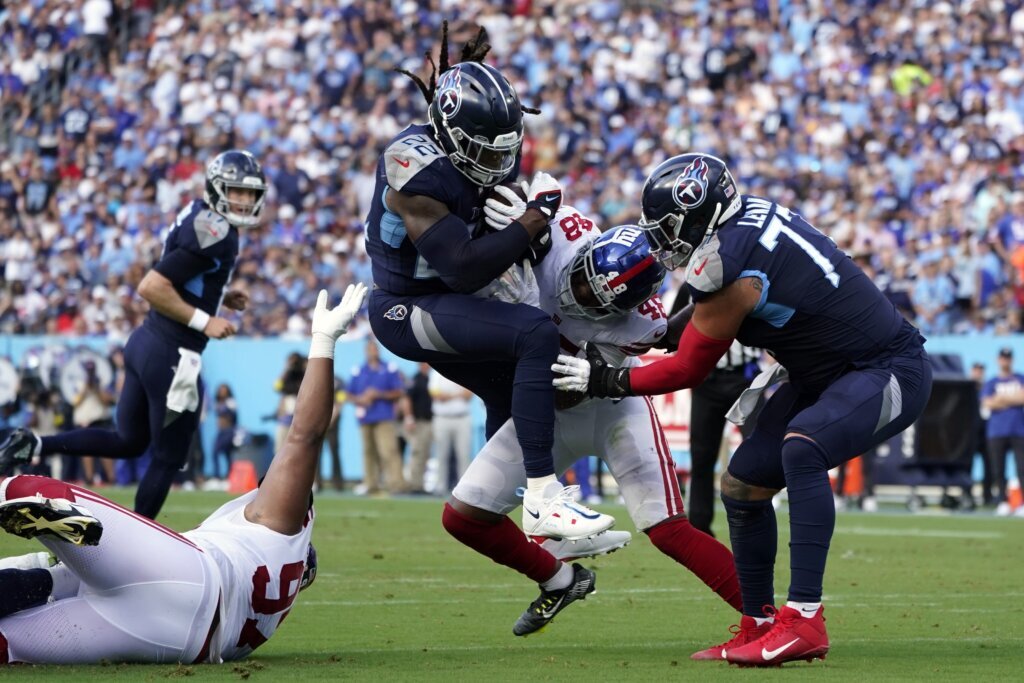 OPENING LINE: Bills by 9 1/2, according to FanDuel SportsBook.

TURNOVER DIFFERENTIAL: Titans plus-1; Bills minus-1.

TITANS PLAYER TO WATCH: RB Derrick Henry. The two-time NFL rushing champ has five of his six TDs scored against Buffalo in Tennessee wins, and he had his best game yet against the Bills last year with 143 yards rushing for three TDs. Henry, who missed the final nine games of the 2021 regular season, was limited to 82 yards on 21 carries with a couple of holding penalties keeping him from a 100-yard rushing performance in loss to the Giants.

KEY MATCHUP: Bills D-line Vs. Henry. The Bills overhauled their defensive front by adding defensive tackles Jordan Phillips, DaQuan Jones and Tim Settle in free agency to bulk up their run defense after being bowled over by several teams, including the Henry-led Titans, last year. The new line limited the Rams to 52 yards rushing last week.

SERIES NOTES: This is the fifth straight season these teams have played and the third consecutive in prime time. The Titans have won the past two, including a rare Tuesday night game in 2020 after Tennessee became the first NFL team with a COVID-19 outbreak during the season. The past two games have been played in Nashville. … Three of the past four have been decided by a touchdown or less. … This will be the 50th meeting between these charter members of the American Football League. The Titans, formerly the Houston Oilers, lead the series 30-19, though the Bills have a 2-1 edge in the playoffs.

STATS AND STUFF: The Titans held on to beat the Bills last year when Josh Allen slipped and Titans DT Jeffery Simmons blew up the offensive front to stop Buffalo’s quarterback for no gain on fourth-and-1 from the Tennessee 3 with 21 seconds left. … The Titans have won three straight prime-time games. … Titans QB Ryan Tannehill passed for 266 yards and two TDs with a 106.4 passer rating. Tannehill has either run or thrown for at least one TD in 16 straight games, a career-high streak. … The Titans had five sacks for their most in the regular season since having five in a road win over the Rams on Nov. 7, 2021. They also had two takeaways. … Simmons had two sacks, including a strip-sack, and now has six sacks combined over his past three games, including a divisional playoff loss in January. Titans OLB Rashad Weaver had his first two career sacks after being limited to three games last season by a broken leg. … Three Titans rookies combined for 10 catches for 132 years led by Kyle Philips, who had a team-high six receptions for 66 yards as a fifth-round pick out of UCLA. … Titans LT Taylor Lewan has started 99 games and played 104 games, most of any player on the Tennessee roster. … Titans TE Austin Hooper needs one catch for 300 receptions. … The win over Los Angeles was Bills coach Sean McDermott’s 50th of his career, with all coming in Buffalo. He joined Marv Levy (112) and Lou Saban (68) to become Buffalo’s third coach to hit 50. … The Bills are 7-5 in prime-time outings since McDermott took over in 2017. Buffalo was 5-17 in prime-time games — and 0-6 on Monday nights — spanning the franchise’s 17-season playoff drought from 2000-16. … Buffalo set a franchise record by converting nine of 10 third down opportunities against the Rams. … Allen is coming off an outing in which he had 297 yards passing and three touchdowns, and ran for 56 yards and a score. He became the first player since 1950 to produce three games with 250-plus yards passing with at least three TDs, and 50-plus yards rushing and a score. … Diggs is tied for 10th among active players with 49 touchdowns receiving, with 19 of them coming in 34 games with Buffalo. … The Bills are 9-0 when scoring a touchdown on their game-opening drive since the start of last season. … Von Miller had two of Buffalo’s seven sacks against the Rams to increase his career total to 117 1/2, most among active players and 22nd overall since the NFL began tracking sacks in 1982. … Buffalo has not punted in three of its past four outings, going back to last season.

FANTASY TIP: Stay away from WR Isaiah McKenzie until the Bills determine whether he’s capable of taking over the slot job. Though McKenzie scored a TD against the Rams, he was faulted for bobbling a pass which led to an interception, while splitting time at the position with Jamison Crowder.