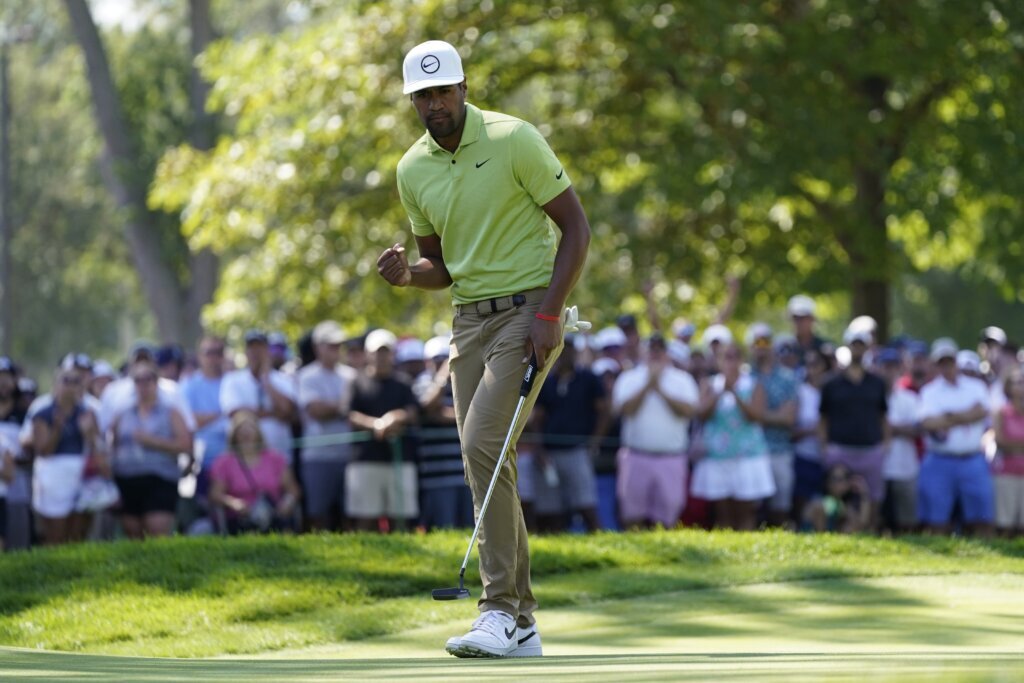 Finau closed with a 5-under 67 for a five-shot victory and a tournament-record 26-under 262 total. Taylor Pendrith (72), Patrick Cantlay (66) and rookie of the year front-runner Cameron Young (68) tied for second.

Finau coasted to his fourth career victory, a third title in 11-plus months. He was the 3M Open winner last week in Minnesota, where he rallied from five strokes back to win by three. Brendon Todd was the last to win two straight in the regular season, doing it in 2019.

Finau, the Salt Lake City native with Tongan-Samoan heritage, began his stretch of success last August at The Northern Trust, where he had his first victory in five years and 142 PGA Tour starts.

Finau stopped another drought in Detroit, winning for the first time in six attempts when he had or shared the 54-hole lead in a PGA Tour event. With his sixth birdie at No. 17 and a closing par, he broke Nate Lashley’s tournament record of 25 under set in 2019 during the inaugural PGA Tour event.

The PGA Tour will close the regular season at the Wyndham Championship, with the North Carolina event opening Thursday. Players on the bubble will have one last shot to finish in the top 125 of the FedEx Cup standings to earn a spot in the playoffs and a full card next season.

Finau and Pendrith started Sunday tied and their potential duel in Detroit turned out to be a dud.

Pendrith had his first lackluster round of the tournament after he shared the first-round lead with Finau, led him by one shot after the second and matched his 21-under total through three rounds.

The 31-year-old PGA Tour rookie from Canada hit an errant tee shot on the second hole to the right in the rough behind tree branches — after being distracted by a fan running across the fairway — and later pulled a 9-foot to lose the lead for good.

Cantlay, No. 4 in the world ranking, had his third straight round in the mid-60s after opening with a 70. Young bounced back from a first-round 71 to finish second for the fifth time.

Pendrith struggled in the final round just as he did the only other time he had a 54-hole lead. He led the Bermuda Championship last October by three shots before a 76 dropped him into fifth place, which was his best finish before his showing in the Motor City. Pendrith played in his third tournament after missing nearly four months with a broken rib.

Finau began to pull away from Pendrith with an 11-foot birdie putt at No. 4 and a tap-in for birdie at No. 7.

He made a 21-foot putt for birdie at No. 10 for his third birdie. After his first bogey in the tournament at No. 11, Finau made a 31-foot putt with a break from right to left at No. 12 and Pendrith missed an 11-foot putt on the same hole to fall four shots back.

Cantlay surged within three shots of the lead with a 5-foot eagle putt at the par-5 14th. On the same hole, Finau made his fifth birdie of the final round to lead by four shots.