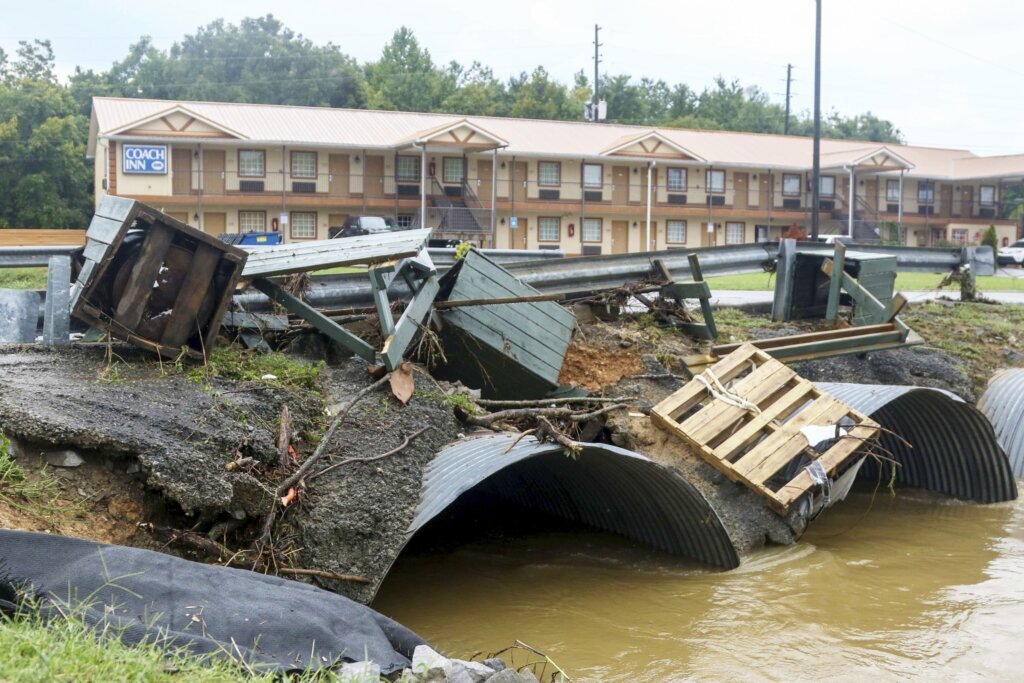 Flood watches were in effect in the U.S. southeast early Monday as forecasters warn of the possibility of torrential downpours on Labor Day across already saturated ground.

SUMMERVILLE, Ga. (AP) — Flood watches were in effect in the U.S. southeast and much of the northeast on Monday as forecasters warned of the possibility of torrential downpours on Labor Day across already saturated ground.

Among the hardest-hit areas in this weekend’s storms was northwest Georgia, where 12 inches (30 centimeters) of rain fell in some spots, forecasters said.

The flooding knocked out water service to parts of Georgia’s Chattooga County, where the school system called off classes for the next couple of days, authorities said.

“Our main thrust right now is getting our water situation back in hand,” said Earle Rainwater, who owns Rainwater Funeral Home in Summerville and serves as the Chattooga County coroner.

“Without water, you can’t do anything,” he said Monday. “We don’t have water except for bottled water and what’s in the creeks.”

Georgia Gov. Brian Kemp on Sunday declared a state of emergency in Chattooga and Floyd counties. That directed all state resources to help with “preparation, response and recovery activities.”

In Chattooga County, several people had to be rescued from their homes on Sunday, especially in lower-lying areas of the county, Rainwater said. “They used Jon Boats, they used kayaks, they used anything that would float.”

Waves of showers and storms were expected to develop Monday in the region, as moisture from the Gulf of Mexico continues to stream across the South and into the Northeast, the National Weather Service said. Some training storms — storms that drop several inches of rain as they move over the same areas like train cars — were also possible, the weather service said.

The chance for flash flooding extended into the northeast, into Pennsylvania, parts of southern New England and the New York City area, the weather service said. Radar showed a strong band of storms traveling northeast just inland from Pennsylvania through Rhode Island and into Massachusetts.

Life threatening flash flooding was reported Monday in the Rhode Island cities of Providence and Cranston, the National Weather Service reported. While there had been no reports of injuries in the area, a number of roads were closed by Monday afternoon, including a section of Interstate 95, and Route 10 — one of the main arteries into and out of Providence.

Up to four inches (10 centimeters) of rain had already fallen in some areas by late afternoon and additional flooding was possible. The heavy rainfall left motorists stranded on Interstate 95 for hours and was responsible for the collapse of at least one building, according to local news reports.

In Connecticut, up to six inches (15 centimeters) of rain had fallen by early evening Monday with north New London County seeing upwards of five inches within an hour. Local forecasters said additional flooding is possible through Tuesday evening.

In Georgia, church pastors and volunteers planned to distribute water on Monday in the small towns of Summerville and Trion, according to the Chattooga County Emergency Management Agency.

“We’ve never had anything like this before,” Summerville Mayor Harry Harvey said.

After visiting the community’s flooded water treatment plant Monday morning, Harvey said, “Things are not as bad as we thought they were, or as bad as they could be.”

Workers were at the site Monday assessing the damage. By late Monday or early Tuesday, “we should have a much better assessment as to what needs to be done,” Harvey said.

The Chattooga County School System will be closed Tuesday and Wednesday due to the flooding, Superintendent Jared Hosmer said.

“Without water, we are unable to flush toilets, wash hands, drink from the fountains, or prepare lunches,” Hosmer said Monday in announcing the decision.