Football has put two-fingers up to Putin’s Russian invasion of Ukraine, the restart of their league is a huge moment

FOOTBALL in Ukraine put two fingers up to Putin this week when a league match was held for the first time since the Russian invasion.

Actually there were three games but the picture postcard one was Shakhtar against Metalist in the 70,000 capacity NSC Olimpiyskiy stadium in Kyiv, empty for all but journalists and officials.

Don’t underestimate the power of a restarted league or the signals it sends to the Russian president, his henchmen and football followers in the whole wide world.

Of course a match or two isn’t going to stop the war. No, this was a demonstration as potent as any gathering of protesters.

Football truly has come home. It is the world’s game.

Surely there will be no big crowds as no one, and certainly the Russian dictator, would rule out mortars hurtling into the stadium. 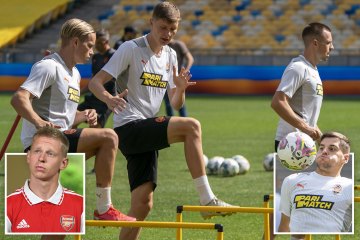 If they can bomb theatres with children inside, then a reminder of the cold brutality of this war would be all too possible.

Shakhtar Donetsk head coach Igor Jovicevic, having been woken that morning by a raid alarm, made this telling contribution: “You wake up and hear it: siren, siren.

“And then you think you are playing later in the day, coaching the match, wanting to think about tactical aspects. We’re playing football and at the same time we’re fighting to be free men.”

And then the players draped in the national colours of blue and yellow, were addressed by the country’s president.

Volodymyr Zelensky recorded this message and said: “Two colours that we all love.

“We care about them and will never allow any other colours on our land. We are always ready to defend our blue flag.”

I can well imagine Putin, slit-mouthed, mocking this brief defiance over a huge table with his yes-men laughing in assent.

But they should pay attention. Shakhtar and Metalist are making a statement.

The absent crowd and millions of people, appalled by the killing, the destruction, the callous brutality and the arrogance that the world ignored when Georgia, the Crimea and Syria were invaded.

They may well see this goal-less game as glorious in its quiet resistance.

It says that some time in the future the good guys have as much of a chance of winning as the bad guys.

Shakhtar were founded in Donbar in the region claimed by Russia and bombed into defiant submission for eight years.

Since then they have played in Lviv, 640 miles from Donetsk. Kharkiv, closer at 150 miles away, and now Kyiv, capital of Ukraine.

With that record, they are not of a mind to bow to bully boys.

They were usurped from their new stadium in 2014 and in playing this week they were making a statement, one that will be admired wherever football is played.

Heroic resistance is loved by supporters but this is much more than a National League team game.

It is the reality of life affecting the greatest sport of all.

But it was held on the six-month anniversary of the tanks rolling towards Kyiv and it appeared to have numbed the players, just as the lack of a crowd did in the pandemic.

The first hurdle has been cleared. The critical questions now are when will the crowd make an entrance and Russia make an exit.