Footballers get stick over their money, but they do the right thing because they’re working class boys, says Ian Wright

IT has not been a good week for Premier League football.

With headbutts, managerial red cards and multi-million pound transfer requests, stars have again been accused of being overpaid and over-pampered.

But Ian Wright, one of top-flight football’s most successful players of all time, reckons the abuse from politicians and Co is “hypocritical”.

“They’ve got families, like myself, who are still earning the minimum wage, so they’re never gonna be people who are out of touch.

“The thing with the politicians is that they love to jump on the bandwagon because they look at the salaries.

“If it was my son, obviously I’d be happy for him to earn that, and if it was their sons they’d want their sons to earn that money as well, so I can’t listen to that bulls***. It’s hypocrisy.”

Former England striker Ian, who signed for Arsenal from Crystal Palace in 1991 for a then-record fee of £2.5million, has also defended players’ salaries.

He does, however, admit today’s wages are “extortionate”, especially in the midst of a cost-of-living crisis.

He continues: “It’s probably down to market value. Look at (Man City’s) Kevin De Bruyne. For his new contract he showed them the algorithms and what that means for the club.

“When you do something like that, and show what your worth is, how can you say he shouldn’t be earning what he’s earning?

“Of course it’s an extraordinary and extortionate amount of money in respect of one person getting £1million a week.

“I can’t comprehend that. But if a player can show what he can do for his football club, then how can I stand there and say, ‘well, he shouldn’t?’.

“Yes, it’s a lot of money when you consider the normal man in the street earning between £25,000 and £31,000. These are two different worlds, and obviously I’ve still got family around that earning capacity.”

Since retiring from the game in 2000, Ian, irritatingly, has barely aged a day.

Still super-fit, he works out three times a week with his two personal trainers and remains one of the most recognisable faces in the game.

A fixture on Match Of The Day, alongside anchor Gary Lineker and former international team-mate Alan Shearer, he has also won a legion of new fans after championing the women’s game.

The Gunners’ second highest goal scorer — behind only Thierry Henry — Ian was part of the BBC’s main presenting team for the recent Euros.

After roaring the Lionesses to victory against Germany, he admits he burst into tears once the cameras stopped rolling, as did fellow pundit Alex Scott.

And, just like Alex, another former Arsenal player, Ian says he has been slammed for having a working-class accent.

Ian, who grew up on a tough council estate in Lewisham, South East London, insists it no longer bothers him.

He explains: “I drop my aitches and people jump on that — ‘ooh, the BBC are dumbing down’, or ‘what’s Ian Wright doing on there?’, and you just think, ‘It’s really not important, it doesn’t matter’.

“People used to say a lot of things, like I can’t string a sentence together and all this sort of stuff. I feel a lot more comfortable in myself now though, I’m not so worried about what people say.”

On the topic of the Lionesses, Ian believes they should be made Dames, not just given OBEs, adding: “Let’s face it, the men would be given knighthoods if they won the Euros.”

He also firmly believes the Government should make it mandatory for all schools to offer football to both boys and girls, explaining: “I want the women’s game to go to the next level now, get the funding it deserves, and more money from sponsors poured into it.”

Ian, who won 33 caps for his country, didn’t turn professional until he was 21.

Working as a labourer until then, he was on today’s equivalent of the minimum wage.

He has just been signed up by M&S to front its new Eat Well, Play Well campaign, helping kids to make healthier food choices, and get into football by winning a training masterclass with the England men’s and women’s football teams, among other prizes.

I didn’t know food. Rare or well-done steak?
What were they on about?

Food is a topic close to his heart, and something that once proved a grave source of embarrassment.

He says he was briefly bullied at Palace and Arsenal because he didn’t know how to eat “posh” food, or even how to order a steak.

Chatting at his local pub over a pint of Guinness and seabass — no such food issues now, it would appear — he says: “When I was younger I used to eat to be full, to stave off hunger.

“We mainly ate West Indian food and it’s only when I went to Palace that I started eating pasta, I’d never had it before.

“So I said ‘well, please’, thinking that meant it would be, you know, cooked the best.

“They would tease me for that. I found restaurants intimidating and used to get my mum to make me food and I’d bring it with me and eat it in secret on my own.

“I stopped eating with them because older players were just bullying me, really. I was intimidated because six months earlier I had been on a building site, eating my mum’s food.

“But now I’m passionate about eating well to fuel the body and look after myself.”

Naturally, though, he is concerned about recent reports that link heading the ball with neurodegenerative disease.

A 2019 study found that the risk of dying from such a condition was three and a half times higher for former footballers.

As a result, Ian believes that financial compensation measures should be in place for anyone who develops problems in retirement.

Ian, who shattered my 11-year-old Spurs-supporting heart with a last- minute nodded winner against Tottenham in 1993, was never one to shy away from a header.

Tony Adams on Strictly? I can’t say I’ve seen him do too many moves

Taking a philosophical swig of Guinness, he says: “It’s like some-times you go into a room and you think ‘what am I here for?’

“You have those moments but I’m feeling like I’m at a stage where if those things are happening to me I probably would have had them before.

“I feel like, being 58 now, forgetting things is quite normal.

“Alan Shearer is really deep into it and he talks to me about it all the time. He probably headed the ball more than both me and Gary, but it’s something the defenders have to worry about too.

“Our defenders, Tony Adams, had to head the ball so much. They had to keep pounding it and pounding it, even in training, so it’s some-thing you worry about for them.

“But for me, you know, if there’s a link between you heading a ball and something happening to you, whatever needs to happen for you to get your compensation, you should get it.

“If people are getting ill from the effects of heading the ball then their family should be compensated.

“But there’s no way I’m not going to play football, I’m still gonna play and then you deal with the consequences.”

Ian’s former team-mate of course, Tony appears to be in perfect health.

Ex-captain Tony, 55, will soon appear fake tanned to the hilt, and head to toe in sequins in the new series of Strictly Come Dancing.

Despite Tony dropping poor Steve Morrow from his shoulders on to the Wembley turf following Arsenal’s 1993 League Cup Final victory, breaking his arm, Ian reckons Tony could be a Strictly dark horse.

Tony’s wife, Poppy, is godmother to one of Ian’s daughters and of his good mate he says with a smile: “We are very close still. When I saw that he was doing it, I did think ‘I can’t say I’ve seen Tony do too many moves’.

“He never did any dancing when we were playing, none. But one thing I know for sure is that no one will try harder to do it. And we’ll be cheering him on.”

Today Ian, who says he’s turned down Strictly “loads of times” because of a fused ankle, is a household name.

He did a stint in the jungle in I’m A Celebrity in 2019 and says he gets asked for a selfie “three or four times a day”.

During our interview two people come over to say hello to him (albeit one to ask for a cigarette lighter: Wrong crowd, love.)

Despite his wealth and fame, he remains remarkably grounded and charming (he also pays for my car parking meter when I fail to correctly use the app).

He credits his wife, whom he clearly adores, for keeping his ego in check: “She’s like my counsellor, and she’s amazing at keeping my feet on the ground.”

He says: “As a 58-year-old there are a lot of footballers who have done a lot better than me. I can’t be thinking to myself, ‘I wish, I wish, I wish’.

“Being in the Premier League Hall of Fame is the greatest thing that’s ever happened to me.

“I said that to my missus and she said ‘what about the kids?’, and I said, ‘that’s a whole different story’. 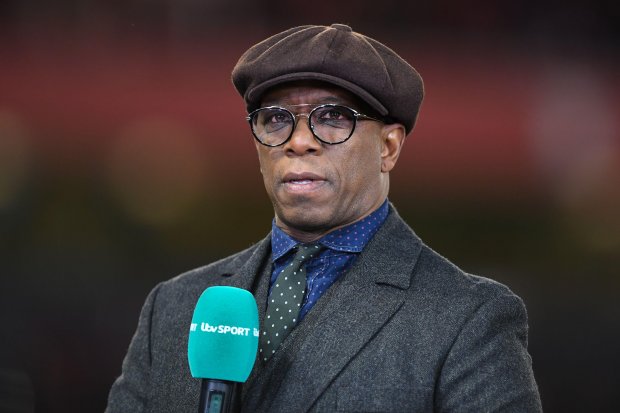 Q. Would you get into the Lionesses starting XI?

A. Taking off my jersey when I hadn’t broken the Arsenal scoring record. F***ing hell, what was I thinking?

A. Couple of days ago, watching the film Don’t Look Up.

Q. Who is the most famous person in your phone

Q. What would you choose for your death row meal?

A. MOTD – not even a question